The installation of the first air monitor in the heart of the Eagle Ford Shale region of south Texas has been delayed following a review of the proposed site by the Texas Historical Commission.

The location selected for the air monitor is on the grounds of the 90-year-old Karnes County courthouse of Karnes City, a community of slightly more than 3,000 in the center of the drilling hotbed. It was supposed to begin operating by the end of October.

But the spot proposed for the 40-foot-by-40-foot monitor with instruments reaching 32 feet into the sky would have spoiled the view of the picturesque building, said Chris Florance, director of public information and education for the commission.

“It was kind of right out there where everybody could see it,” said Karnes County Judge Richard Butler, the county’s top executive.

Officials of the Texas Commission on Environmental Quality (TCEQ), the agency installing the monitor, agreed.

The TCEQ, which invited the historical commission review, and local officials are now trying to identify a less intrusive location for the monitor on the courthouse grounds, according to TCEQ spokesperson Andrea Morrow.

The original location was selected because of its proximity to an electrical source. It was good for logistics but not so good for aesthetics, Florance said.

Two alternative locations are being considered. The sites would have much less visual impact on the three-story masonry building designed in the Richardsonian Romanesque style that is undergoing a $1 million plus renovation.

The monitor is now supposed to be installed and operating by the end of the year, Morrow said.

Placement of the air monitor in Karnes County follows a recent air-quality study, pressure from local officials, news reports and residents worried about the air they breathe.  The study conducted for the TCEQ by the University of Texas at Austin earlier this year on the fringes of the Eagle Ford found that certain oil field emissions in many cases were higher downwind—toward San Antonio—than upwind.

An investigation by InsideClimate News, The Center for Public Integrity and the Weather Channel in February disclosed that the TCEQ knows little about air quality in the area. The series, “Fracking the Eagle Ford Shale: Big Oil & Bad Air on the Texas Prairie,” found that from September 1, 2009, through August 31, 2013, there was a 100 percent increase statewide in unplanned toxic air releases associated with oil and gas production. Companies were rarely fined, even when inspections revealed they were operating equipment improperly.

The courthouse site was picked because of its central location in Karnes City, a community in the midst of one of the largest oils and gas booms in the nation.

Although the TCEQ conducts sporadic mobile monitoring and operates five permanent monitors at the edges of the 20,000-square mile, 26-county Eagle Ford, little monitoring has been conducted in areas with the heaviest drilling activity.

More than 10,000 oil and gas wells have been sunk in the Eagle Ford since 2008. Emissions from the wells have prompted residents to complain of breathing difficulties and other health problems.

The Karnes County monitor will have three instruments to measure for specific pollutants, Morrow said.  All three pull in ambient air samples at least once every hour for analysis of 46 volatile organic compounds, hydrogen sulfide, and nitric oxide and nitrogen dioxide.

TCEQ scientists will then evaluate the data for any potential health impacts, Morrow said. The results will be made available on the agency’s website when it becomes available sometime next year. 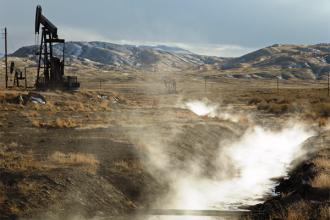 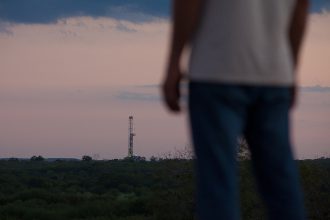