That assessment was released Thursday by the political advocacy group the League of Conservation Voters, which tracked senators’ votes on 18 different environment-, climate- and energy-related amendments attached to the Keystone XL bill, as well the Keystone bill itself. The report’s results demonstrate the sharp partisan divide likely to rule Congress’ climate-and-energy decisions for the next two years. They also provide a glimpse into where the issue of climate change is—and is not—being debated within the United States. Twenty-four states had senators split on the issue, with one voting pro-environment and the other voting anti-environment most of the time.

The League of Conservation Voters has been tracking Congressional members’ votes on environment-, public health- or energy-related bills since 1970. Every year it publishes the results in a National Environmental Scorecard. This latest breakdown is a special edition of the group’s annual report, warranted because it hints at both how newly elected lawmakers and the Senate as a whole are approaching the issue of climate change. “We just couldn’t wait,” said Gene Karpinski, president of the League of Conservation Voters.

The Senate docket included amendments that would:

None got the necessary 60 votes to pass.

The new GOP Senate is sending a message that “payback to polluters” is more important than the environment and health of its constituents, said Karpinski.

A few Republicans, including Susan Collins of Maine, Kelly Ayotte of New Hampshire and Mark Kirk of Illinois, broke party lines and said “yes” to some of the amendments.

Democratic Sen. Brian Schatz of Hawaii said there were a few glimmers of hope within the votes. One amendment he sponsored that acknowledged climate change is human-caused split the Senate 50-49 and gained five Republican yeses.

“[Climate change] has become a defining issue for both political parties,” Schatz told reporters on Thursday. “It is a question of whether you are on the side of the facts, whether you are modern or not.” 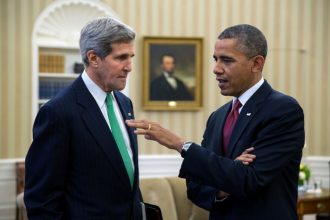