Even for the adamantly apolitical American Meteorological Society, President Donald Trump’s fumbling disputations of climate change in a recent television interview were too much.

So, on its collegiate, old-school letterhead, the society’s executive director, Keith Seitter, wrote the president a polite but pointed message last week.

“There is a wealth of comprehensive and accurate information on climate change available to you and your staff within government agencies, as well as from experts in academic institutions and other organizations,” Seitter nudged, adding that the society “stands ready” to provide expertise to Trump and his cabinet.

The suggestion was born out of an exasperation that many scientists, those focused on climate change and otherwise, are feeling in the Trump era. Rather than wring their hands, though, scientists are attempting to do something they’re not especially known for: connect with the public.

“Certainly, many scientists have been frustrated by misstatements by the president and members of his administration,” Seitter said. “Many of these scientists are AMS members, so yes, this has been an issue of concern within our membership.”

[Update: A response from Trump arrived in April, thanking the group for its commitment but saying his administration “is committed to protecting American workers and American companies from necessary regulatory burdens.”]

Responding to the Trump administration’s rollbacks of environmental laws, its efforts to push qualified scientists off advisory boards and its nominations of climate change deniers to top positions, scientists and their supporters have protested and petitioned.

They’re also aware that scientific studies are often written in technical, jargon-laden ways that can be difficult for non-scientists to understand.

So, they’re redoubling their efforts to address the stubborn and longstanding challenge of communicating science—and at a time when the message is existentially crucial.

Last week, the Intergovernmental Panel on Climate Change issued a handbook to help its members better communicate the findings of a new IPCC report, due out later this year. The handbook, based on the science of science communication, lays out six principles that scientists can use to explain the complexities of climate science. These tips include “connect with what matters to your audience” and “tell a human story.”

In a forward, Roz Pidcock, the IPCC’s head of communications, writes that the handbook maintains a “focus on practical guidance for real public engagement scenarios” and notes that this is the first time the IPCC has produced a document of its kind.

Adam Corner, research director at Climate Outreach, the UK-based group commissioned to write the handbook, said being able to help people understand what the evidence shows is even more critical now.

“In the U.S., the landscape for communicating climate change has undoubtedly got more hostile since Trump began removing the capacity and resources from environmental science initiatives,” Corner explained. “So, there’s a renewed sense of urgency to ensure climate scientists are supported in the work they do, and to feel confident in engaging effectively with the public.”

Corner said the handbook “came from positive developments within and around the IPCC, who have finally begun taking communication more seriously and are investing in their own staff as well as outside expertise to become better equipped to connect beyond specialists’ circles.”

Trump’s Tried to Silence These Scientists. It Didn’t Work.

The U.S. government has gone in the opposite direction.

The Trump administration, which has been erasing climate change information from government websites and deserting science advisory boards across the government, disbanded an advisory panel whose role was to help policymakers and private-sector officials understand and incorporate the findings of the National Climate Assessment into their future planning.

That didn’t kill the effort, though. Rather than let the National Climate Assessment findings languish, Columbia University’s Earth Institute announced in January that it had hired the panel’s chair, Richard Moss, to reassemble the panel and resume the work.

“There’s been an upwelling of support for the committee, because states and cities and businesses want access to information that helps them prepare,” Moss said in a blog post. “They want a better network, and they want to keep learning from each other.” 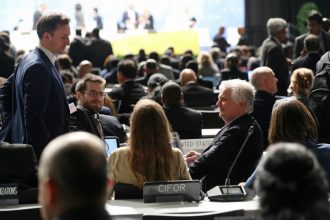