A deal reached this week to replace a troubled oil and gas pipeline under the Great Lakes’ Straits of Mackinac could mean the aging pipeline continues operating for years longer.

The 65-year-old Enbridge Line 5 has lost chunks of its outer coating and it appeared to have been dented by a ship’s anchor earlier this year, raising fears of a rupture that could contaminate Michigan’s shorelines.

Under the new agreement with the state of Michigan, the pipeline’s operator, Enbridge, would pay for construction of a tunnel beneath the straits to house the pipeline’s replacement, providing more protection but also locking in new fossil fuel infrastructure for decades to come.

The project would take an estimated seven to 10 years, with no deadline for when the current pipeline would be shut down.

The deal includes some safety measures for the old line, such as Enbridge agreeing not to operate the pipeline when high waves would slow the response to a spill. And it prohibits piping heavy crude oil from Canada’s tar sands fields, such as diluted bitumen, or dilbit, in the future. But the pipeline could still carry light crude oil and natural gas liquids.

Environmental groups say the safety measures don’t go far enough to protect a highly sensitive ecosystem. And they criticized the lack of a firm deadline for shutting down and removing the current pipeline, saying it gives Enbridge wide latitude to stall.

“The governor really punted on the key question, which is what should be done right now to protect the Great Lakes from an oil spill on Line 5,” said Mike Shriberg, Great Lakes regional executive director for the National Wildlife Federation.

The Big Question: When Will It Shut Down?

Shriberg noted that the agreement only says that the state and Enbridge will initiate discussions on implementing the plan “as soon as practicable.” That leaves big questions about when that section of the old pipeline will be shut down and removed.

The pipeline has raised concerns for years. Line 5 has had more than two dozen leaks over its lifetime in various locations along its route from Superior, Wisconsin, to Sarnia, Ontario. Last December, a pipeline safety board called for an immediate, temporary shutdown after Enbridge notified it that sections of anti-corrosion coating had come off the dual pipelines where they run along the bottom of the Straits of Mackinac.

Gov. Rick Snyder rejected the safety board’s recommendation in January, saying it was “highly unlikely that Enbridge would agree to voluntarily suspend pipeline operation for months.”

Snyder spokesman Ari Adler said Thursday that there was no imminent threat of a spill from the existing pipeline. As for a timetable, he said, “The time for removing the current pipeline is dependent on the time needed to build the new tunnel and install the new, safer pipeline.”

The next step is for the Mackinac Bridge Authority to approve the plan, which will then lead to other steps, he said.

The Next Governor Is Stuck with the Deal

Snyder, a Republican, signed the deal with Canada-based Enbridge less than three months before he leaves office. Carrying out the agreement will fall to the next governor, and Line 5 is playing into the November election.

Gretchen Whitmer, the Democratic nominee, has said that if elected she would immediately announce a plan to shut down Line 5. She called the new agreement “unacceptable.”

“Enbridge has deceived the state for years, so it would be foolish for any public official to trust that they won’t later seek taxpayer dollars,” Whitmer said in a statement. “And it is irresponsible for the state to sign this agreement in the final days of an administration and potentially bind the hands of the next governor for their entire time in office.”

Her Republican opponent, Bill Schuette, has said Line 5’s “days are numbered,” but he has been criticized for not doing more in his current role as state attorney general to shut down the pipeline.

Under the agreement, the tunnel under the Straits of Mackinac would be paid for by Enbridge, but owned by the state and leased back to the company for as long as Enbridge operates that part of the pipeline. Enbridge also agreed to other work on the pipeline, including replacing the section of Line 5 that crosses the St. Clair River into Ontario.

Enbridge said in a press release that the tunnel bored into the lakebed “would reduce the likelihood of a release of oil into the Straits to virtually zero and eliminate the potential for an anchor strike.” 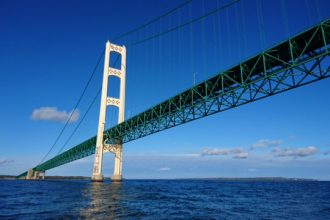 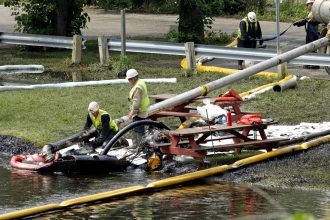