As Duke Energy attempts to scale back its 100 million-ton greenhouse gas footprint to reduce future emissions, the utility giant is also studying how it can cope with the damage already being caused by climate change.

The Charlotte, N.C.-based power company is in the third and final year of a $1 million effort with the nonprofit Nature Conservancy to slow saltwater intrusion in the Albemarle Peninsula, near the Outer Banks.

By creating oyster reefs and planting 20,000 different kinds of trees in the estuary, the research team aims to ward off rising sea levels and restore the ecosystem’s peat-rich soils before the peninsula is submerged in a century.

Heather Quinley, Duke’s director of energy and environmental policy, said the project marked the start of the utility’s efforts to develop climate preparation plans for the areas it serves.

It has also made the utility one of a growing, but still small, number of companies trying to address adaptation, as global warming shifts agricultural patterns and alters coastlines.

Duke has about 4 million electricity customers in North Carolina, South Carolina, Kentucky, Ohio and Indiana. In the Midwestern states, more than 90 percent of its power comes from coal-fired power plants, while the other states use mostly nuclear and hydropower.

“This is not part of our [greenhouse gas] mitigation strategy,” she said of the project at a June 27 conference on adaptation at the Rockefeller Foundation in New York City.

With Adaptation, ‘A Competitive Edge’

Global financial and environmental institutes are urging all businesses to take similar steps in safeguarding customers, workforce and supply chains against the increasing impacts of man-made climate change — particularly in developing countries with limited means to recover from disasters.

“Community risks are business risks,” Heather Grady, vice president of foundation initiatives at the Rockefeller Foundation, said at the conference.

She noted that the foundation is spending $70 million over a period of several years to spur initiatives on global warming resilience in poor and vulnerable areas worldwide.

“The ‘community’ is not an abstract stakeholder concept. This group constitutes business’s customers, consumers, suppliers and employees,” she said.

“Businesses that make these connections and adapt to climate change with community needs in mind will gain a competitive edge.”

In a white paper published on June 28, the Pew Center on Global Climate Change indicated that extreme weather events — such as recent flooding in Tennessee and droughts in the U.S. Southwest — are on the rise as atmospheric greenhouse gases increase.

“It is impossible to predict where or when extreme events will occur, but a large body of scientific evidence makes it clear that the risk of such events has increased and should be expected to continue to increase as the climate warms,” the paper cautioned.

“These events provide important clues to … actions we can take today to make us more resilient to the growing risks of more frequent extreme weather events.”

Yet Heather Coleman, a senior policy adviser with Oxfam America in Boston, said at the conference that “few companies are developing strategic responses to climate change.”

While 86 percent of the companies surveyed said that investing in adaptation solutions is a viable business opportunity, less than one-third are taking action to build climate resilience in the communities where they operate, according to a Caring for Climate report issued in June.

“Uncertainties about the location, magnitude, potential timing and consequences of climate change impacts make it risky for them to tackle adaptation on their own,” the report said.

The Washington-based Global Adaptation Institute hopes to fill the climate information gap with its Global Adaptation Index (GaIn), a metrics tool that examines the food, agriculture, energy and water sectors, as well as coastal protection efforts, in any given developing country.

“Much in the same way of what a rating agency will do in terms of country risk or sector risk, the Global Adaptation Index is going to rank countries according to their vulnerabilities and their levels of readiness,” Juan José Daboub, the institute’s CEO and a former finance minister of El Salvador, told SolveClimate News.

The index will be available to businesses, investors and the public sector this fall, and the institute will begin a global consultation process in July to develop corporate and civic adaptation strategies, he said.

Daboub, a former managing director of the World Bank, added that the tool is suited for “companies that are either investing in a particular sector and want to prepare themselves for the changes that will take place, or companies that … want to be at the beginning of the line to actually make the investments at a manageable level of risk.”

“[Impact management] is an opportunity for us to drive our investments to find ways to address adaptation and the impacts of climate change,” she said at the New York event.

In 2010, the U.S. Securities and Exchange Commission issued guidance for publicly held companies to disclose their climate risks and mitigation, adaptation and management strategies.

Calvert has since filed shareholder resolutions with Cincinnati-based retail food chain Kroger asking the company and its board of directors to report on how they will assess and manage the impacts of climate change on the corporation.

The investment adviser also filed a resolution with Orrville, Ohio-based J.M. Smucker Company, which earns 40 percent of revenue from its Folgers coffee label and sources palm oil for its Crisco-brand cooking shortening.

“Despite exposure to commodities, the companies still have no strategic plans in place to address climate change or its impacts,” Henson said. 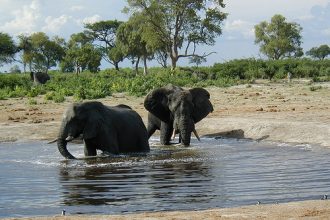 From Fiji to Botswana, a Lighter Carbon Footprint for Tourism 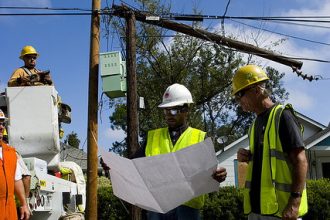