Leaders of the world’s largest economic powers will have a chance this weekend to show whether President Donald Trump‘s withdrawal from the Paris climate agreement strengthened their resolve to act on climate change—or whether it opened cracks in their solidarity.

The G20 summit in Hamburg is the first top-level diplomatic gathering of all the biggest emitters of greenhouse gases since Trump’s announcement, and German Chancellor Angela Merkel, the host, has pledged to put climate change high on the agenda.

“We cannot wait until every last person on Earth has been convinced of the scientific proof,” Merkel said in a speech last week.

Even though a host of other contentious issues—trade, migration, North Korea’s nuclear ambitions, and the fraught relationship between the U.S. and Russia—are likely to get more attention, Merkel has virtually guaranteed that the meeting will include a litmus test on climate fortitude. After she assumed her one-year presidency of the G20 in December, she set up a sustainability working group that has developed a detailed policy roadmap for the nations to slash carbon emissions. That G20 action plan will be before the group in Hamburg. Together, the G20 countries are responsible for 80 percent of the world’s greenhouse gas pollution.

Early drafts of the document address the full array of measures the G20 has been discussing for years: scaling up renewable energy, sharing clean energy technology, ending fossil fuel subsidies, and assisting developing countries through the Green Climate Fund. The final document, still being negotiated this week, also could include an endorsement of the recent recommendations of a G20 task force headed by former New York Mayor Michael Bloomberg on how to increase corporate disclosure on exposure to climate risks.

The final language of the so-called G20 Action Plan on Climate and Energy for Growth, and how many nations sign on to the document, will indicate how determined nations are to fulfill the promise of the Paris accord in the Trump era. If no separate climate action plan is approved, that also would be a statement that the U.S. has shaken unity on global climate action.

“The role of the G20 on climate change, I think, is very different now, given the U.S. administration in power, than it was previously,” said Robert Stavins, director of Harvard University’s environmental economics program. “It’s in a position where it is now important for the G20—or the G19, if that’s what it turns out to be—to restate its own endorsement of the Paris climate agreement, and their intention to move forward with it.”

The G20, with its historic focus on global economic issues, played a side role on climate in the past. While talks aimed at reaching a global accord went forward under the United Nations Framework Convention on Climate Change, the G20 addressed climate issues related to finance and economic stability. Most notably, at its 2009 summit in Pittsburgh, the G20 pledged to phase out national fossil fuel subsidies, declaring them wasteful and inefficient, as well as environmentally damaging. Since then, though, the countries have done little to end tax breaks for oil and coal companies or the government support that keeps gasoline and fossil-fueled power cheap for consumers in many nations. Many had hoped that nations would be setting a timetable for eliminating such subsidies at the Hamburg summit.

“If it weren’t for the Trump position, that’s where the focus would be and ought to be,” said Stavins. “What’s going to be important instead is their overall endorsement that they’re moving forward—and that they’re interested in implementation, not renegotiation of the Paris agreement.”

If so, it could be a reprise of the end of the G7 summit in late May. At the G7 summit, with Trump still mulling his decision on Paris, leaders of all six of the world’s other big industrial democracies reaffirmed their strong commitment to swiftly implement the climate accord, leaving the United States out of that portion of the joint communiqué at the end of the summit.

A State Department spokesperson referred questions on the administration’s position to the White House, noting that the National Economic Council was taking the lead on G20 negotiations. The White House did not respond to a request for comment. The council is headed up by Gary Cohn, former president and chief operating officer of Goldman Sachs, and the lead negotiator on his team is Everett Eisenstat, a former leading Republican counsel on trade issues for the Senate Finance Committee.

Some observers believe that among the larger group of major economies, which includes China and the world’s other big fossil fuel producers and consumers, there may be less appetite to line up against Washington on climate change.

“Other countries don’t want to isolate the United States in the way that the G7 was willing to do to make a statement,” said Sarah Ladislaw, director of the energy and security program at the Center for Strategic and International Studies. “Is Saudi Arabia going to do that? Is Russia going to do that? Is Turkey going to do that? A lot of people were looking towards China to hold a hard line against the United States on reiterating the importance of climate change. Well, it’s been a really rough few weeks for the U.S. and China. Is this the week and is that the issue upon which they want to have a face-off?

“My sense is folks going into the G20 are going to look around the world and say, ‘Golly, it’s a bit rough. How can we get in, get out and go home and not have a really big problem?'” she said.

Ladislaw thinks it would be possible for G20 leaders to draw up extremely broad language on sustainability and environmental cooperation that Trump can sign for the final communiqué, without drawing a line on the hot-button issue of the Paris accord. A draft of the language obtained by Reuters had the world leaders acknowledge the United States’ isolation in opposing the Paris climate agreement and agree to collaboration on reducing emissions through innovation.

If that is the approach of the final communiqué, it will put more focus on whether the other G20 leaders sign onto a separate strong climate and energy action plan.

“This is an extremely delicate political situation, and we don’t know what the outcome will be,” said Lutz Weischer, team leader for international climate policy for the non-governmental organization Germanwatch. “We are not confident it will be a strong 19-party signal.”

Weischer said there was support for the draft language in May among 19 of the lead negotiators. But since then, he and other close observers of the process have seen signs that Saudi Arabia has backtracked, while other nations have fallen silent.

Trump pointedly has sought to forge stronger ties to Saudi Arabia. And high on his energy agenda is sale of U.S. natural gas into the European Union. He discussed a long-term commitment on natural gas imports at his meeting with Polish leader Andrzej Duda on his way to the G20 summit. It is not clear how the U.S. drive to sell natural gas, and Europe’s need for the security of another supplier besides Russia, will complicate discussions on climate change.

Andrew Light, a senior fellow in the global climate program at the World Resources Institute who served as a climate negotiator in the Obama administration, said he doubts that the other G20 nations will amend the climate roadmap document to address the objections of the United States. Even those that might have been willing to consider deal-making on the language would have been put off by recent statements by Trump that he is considering large tariffs on steel and other imported goods, he said.

“There will be no statement rather than a watered-down statement,” Light said. “If you’re dealing with a White House that is intent on creating an environment of turmoil in the world, they are not going to give in on something as important as climate change.”

Alden Meyer, the director of strategy and policy at the Union of Concerned Scientists and a long-time close observer of international climate negotiations, said he believes the statements that are signed at Hamburg will not be as important as what the nations are actually doing to meet their commitments on Paris.

“What really matters is follow-through on the ground, and on that, the G20 has a mixed record,” Meyer said. “This is an important meeting, an important milestone to show that they are pressing ahead, but it is not the be-all and end-all. There’s a lot of work to do even if we have the best possible result in Hamburg.” 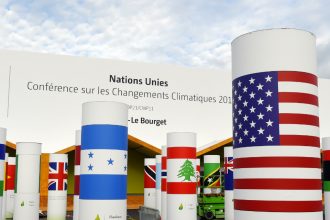