ExxonMobil has landed a new deadline extension for telling regulators how it plans to safely resurrect the failed Pegasus oil pipeline, and the new April 7 due date guarantees that the line will still be idle one year after it ruptured and sent heavy crude streaming into an Arkansas neighborhood.

The federal Pipeline and Hazardous Materials Safety Administration (PHMSA, pronounced fimm-sa) granted Exxon its second 90-day reprieve last month, but the change wasn’t disclosed by Exxon and PHMSA until yesterday. Jan. 6 was the due date set by PHMSA for the Pegasus “remedial work plan” after Exxon requested a three-month extension from the original deadline of Oct. 6.

The delay worsens the state of limbo that has engulfed the pipeline and further frustrates officials who are still waiting for crucial details about what caused the spill and what remedies are under consideration.

There is substantial interest in the required Pegasus plan because it should disclose or offer clues about when Exxon hopes to restart the pipeline, all the factors that played a role in its failure, and how the company intends to prove that the 65-year-old line can be safely operated.

All that is of great interest to officials and residents in Mayflower, Ark., where the 858-mile long Pegasus pipeline split apart on March 29, spilling Canadian oil sands crude that was being carried from Illinois to the Texas Gulf Coast. An estimated 210,000 gallons of the heavy diluted bitumen, or dilbit, flowed into a subdivision and waterway, sickening nearby residents and permanently dislocating more than 20 families from homes that Exxon subsequently purchased or demolished.

The case is also being closely watched by Arkansas’ state and federal legislators, participants in a handful of Pegasus lawsuits, a water district hoping to protect Little Rock’s drinking water from future oil spills and communities elsewhere along the pipeline’s route.

Even other pipeline operators and environmentalists across the country are tracking the fate of the Pegasus. That’s because the accident has been linked to the nationwide debate over the long-delayed Keystone XL oil import pipeline, which would also transport Canadian dilbit. In addition, the problems uncovered on the Pegasus—and the required fixes—could have nationwide ramifications, since more than a third of the country’s hazardous liquid pipelines are of the same vintage and have the same inherent vulnerabilities as the Pegasus.

For all of them, the wait for answers just got at least three months longer.

Richard Kuprewicz, a pipeline safety expert and consultant for the Arkansas water district that wants to reroute part of the Pegasus out of a key watershed, said it’s unclear what Exxon has been doing in the six months since the metallurgical tests of the pipeline were released.

“I have no problem with the extensions if the parties are truly working toward addressing the issues/breakdowns that resulted in the Mayflower rupture—especially if the extension results in really meaningful progress to avoid future possible rupture,” Kuprewicz said in an e-mailed response to questions about the new deadline.

But, he added in the email, “what’s unbelievable is the lack of details to show/demonstrate meaningful progress.”

In its letter seeking another three-month delay, Exxon offered no additional information about the tests it has been conducting or about other pipeline actions or developments. Apart from a few words and the relevant dates, the company’s Dec. 18 request for an extension is essentially identical to the one submitted to PHMSA on Oct. 3.

For a second time, Exxon told PHMSA that it is conducting testing and analysis on the failed section of the Pegasus and that it needs another three months “to allow for the additional testing, analysis and integration of the results, and development of a more effective Work Plan.”

Information about the Pegasus pipeline and the spill has been tightly controlled from the beginning, and after nine months, there’s still no discussion of what actually caused the Pegasus to split apart while it was operating well below the line’s maximum allowable pressure.

A metallurgical analysis of the failed Pegasus segment found that the rupture probably stemmed from metal flaws, such as tiny J-shaped hook cracks, which were created when the pipe was manufactured in 1947 or 1948. However, the report did not pinpoint what awakened those long-dormant flaws.

“It is the extension of the hook cracks that is the key to this failure,” Patrick Pizzo, a professor emeritus in materials engineering at San Jose State University, told InsideClimate News in September. “You have to get those cracks in motion in order to lead to a leak or a fracture.”

Some experts have speculated that the driving force might have been large and frequent pressure swings within the pipeline, something that could have been exacerbated by the variable viscosity of the Canadian dilbit. Others have suggested that a chemical reaction involving excess hydrogen could have played a role.

It’s also possible that the operational changes Exxon made to the Pegasus—restarting segments after years of sitting idle, reversing the direction of the oil flow, changing the type of oil it was carrying, then doubling the amount of oil being pushed through it—altered the internal dynamics enough to activate the pipe’s inherent flaws.

The remedial work plan required of Exxon should shed light on the issue. Under the corrective action order issued by PHMSA in early April, the oil company’s work plan must address “all factors known or suspected in the failure,” and must incorporate the results of all failure analysis testing as well as historical operating data, repairs, maintenance, inspection results, and third-party assessments.

Exxon must also make available to PHMSA all information about additional field testing, inspections and evaluations conducted on the Pegasus to determine what adverse conditions might be present elsewhere on the Pegasus pipeline. The company also must lay out the repairs, corrective measures or other steps it has taken, and will continue to take, to address known risks along the pipeline.

After submitting the remediation plan, Exxon must complete the work outlined in it, then submit a restart plan and win approval from the director of PHMSA’s Office of Pipeline Safety, Southwestern Region.

For Exxon, the new deadline further extends a pipeline outage that was already unusual for its length and cost in lost revenue. With the pipeline now set to be down at least through March, the oil company will lose a year’s worth of income from the Pegasus. If the pipeline were operating at its full capacity of 90,000 barrels per day, and selling space at published shipping rates (not including ancillary fees), the lost revenue would amount to $450,000 per day, or about $164 million for the year.

To date, Exxon has spent at least $70.5 million on cleanup costs and compensation to affected residents, according to Exxon spokesman Aaron Stryk.

In addition, PHMSA has proposed a $2.66 million fine for the Pegasus spill. The fine is outlined in a 12-page Notice of Probable Violation and Proposed Compliance Order that accuses Exxon of delaying a crucial inspection, putting off urgent repairs, using skewed data to mask pipeline threats and overlooking its own evidence that the Pegasus pipe seams were vulnerable. Exxon has challenged the fine and PHMSA’s allegations, but a hearing on the matter has not yet been set.

In a statement yesterday, Exxon spokesman Stryk reiterated that the Pegasus “will only be restarted when we are convinced it is safe to do so and have the approval from PHMSA.” 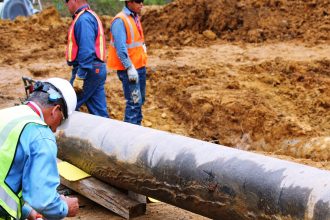