Companies such as Molycorp, Lynas and Avalon Rare Metals may rest assured that developing the offshore bounty could take decades and cost billions, making it little more than a pipe dream, analysts say.

“‘Desperado,’ that’s the first word that comes to mind,” said Jacob Securities analyst Luisa Moreno. “It makes for some nice headlines, but I don’t think it would really be feasible to do this.”

The discovery of the vast deposits, located on the floor of the Pacific Ocean, 3,500 to 6,000 meters (11,500 to 20,000 feet) below sea level, marks the latest bid by the Japanese to secure their own supply of rare earths, which are critical ingredients in the production of high-tech products.

Prices for rare earth metals have skyrocketed over the last year as China, producer of some 97 percent of the global supply, has repeatedly clamped down on exports.

Dysprosium, which is used to make magnets for hybrid cars and smartphones, has soared to $3,600 a kilogram, up from $300 a kg a year ago, while neodymium, also used in magnets, is hovering at about $450 a kg, up from $45 late last year.

Outside China, Japan is the largest consumer of the group of 17 metals, and the breakneck price jumps have hit it hard. The country’s demand for rare earths is expected to shrink by as much as 30 percent in 2011 as companies cut usage, sources told Reuters.

“Obviously they are very frustrated and very desperate for alternatives,” Moreno said.

She noted that the Japanese have been experimenting with rare earth recycling, and are also looking to invest in rare earth exploration projects around the world.

“They want to be independent from China,” she said. “These materials are really, really critical for their economy.”

With some 80 billion to 100 billion tons of contained rare earths, the underwater deposits outlined by Japan are certainly larger than any deposits found on solid ground — but the feasibility of harvesting the metals from sea sludge is less clear.

According to Japanese scientists, it is simply a matter of pumping up the material from the ocean floor and using acid to extract the rare earths from the mud.

But analysts aren’t so sure.

They point out that rare earths are notoriously tricky to process on a commercial level, and that development of the deposits, located miles underneath the sea, would be costly.

“The technology you would need, with the pressure and the corrosive factors that are there,” said Dahlman Rose analyst Anthony Young. “I think this one falls into the camp of something that is less likely to ever be developed.”

Certainly there are mining companies that see value in the ocean floor.

Canada’s Nautilus Minerals plans to develop an underwater copper project off the coast of Papua New Guinea, while the diamond industry has been mining off the Namibian shoreline for years.

But with hundreds of companies exploring and developing rare earth deposits on solid ground, analysts say the value of mining the metals underwater remains unclear.

“The cost of undersea mining, necessarily, is going to be high,” said Byron Capital Markets analyst Jon Hykawy. “The value of the mined products must therefore be high.”

“Rare earths have become pricier, but they are by no means pushing the levels of the prices of really rare materials such as gold.”

Chinese state media reported on Wednesday that the country is planning to reform its export of rare earths based in part on World Trade Organization rules, a move that could loosen the supply crunch.

Still, analysts say there is a clear need to develop mines outside China, and the top pick for many is Molycorp, which plans to start up its Mountain Pass mine in California next year, ramping up to output of 40,000 tonnes a year by late 2013.

Rival Lynas, which owns the Mount Weld mine in Australia, plans to start up production by the end of the year, hitting 22,000 tons annually in 2013.

Junior miners such as Avalon, Rare Element Resources and Great Western Minerals are all clamoring to be next.

With global demand at about 130,000 tons in 2010 and expected to grow rapidly over the next five years, Molycorp and Lynas together can produce about a third of the world’s need.

If Japan develops the deep sea deposits, which a government source said could come into production within five to 10 years, it also would be a huge source of supply.

“Just one square kilometer (0.4 square mile) of deposits will be able to provide one-fifth of the current global annual consumption,” said Yasuhiro Kato, an associate professor of earth science at the University of Tokyo.

Still, rare earth producers and explorers are not fazed by the possibility of future competition from offshore mines.

“It’s ridiculous to think you’d be able to dig anything up and haul it up from those kinds of depths,” said an executive at a Canadian-listed rare earth company, who declined to speak on the record because of the sensitivity of the issue.

“I’ll wait for the giant squid and the prehistoric monsters that will come out of the bottom of the sea first before we see any rare earths.” 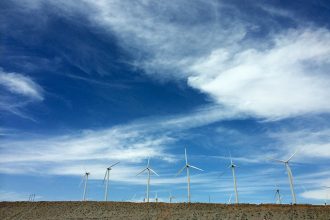