ExxonMobil could restart the northern leg of its Pegasus oil pipeline within a year, but the company’s pre-startup tests could leave behind threats large enough to endanger the public, according to a review of Exxon’s proposal.

Those details and others are laid out in Exxon’s repair plan for the Pegasus northern segment, a document that was submitted to federal pipeline regulators at the end of March. The so-called “integrity verification and remedial work plan” was not publicly released, but InsideClimate News obtained a copy through a public records request.

Exxon plans to conduct stress tests on the pipeline to prove that it can be safely restarted. But the company also said if high-pressure tests trigger a significant number of pipeline failures, it might lower the pressures—a downgrade that could leave dangerous cracks in the pipe. The Pegasus split apart in Mayflower, Ark. in March 2013, and sent a flood of Canadian diluted bitumen into a neighborhood.

Publicly, Exxon has touted the “multiple layers of integrity verification” in its Pegasus plan, and promised that it would ensure “the safety of all communities along the [northern] segment.” As part of the plan, the company said it would conduct hydrostatic pressure tests—a decision many applauded because the Pegasus is vulnerable to cracking and hydrotesting is the most reliable way to find and rid pipelines of crack problems.

Richard Kuprewicz, a pipeline safety consultant involved in the Pegasus case, was happy with Exxon’s decision to hydrotest the pipeline. But after reviewing the details, he called the company’s testing plan “a fatally flawed approach.”

“The first thing I’d say is don’t do this,” said Kuprewicz, who is advising an Arkansas water district that wants more safeguards on the Pegasus. “This is not what I would advise or recommend because it doesn’t accomplish the task. It doesn’t deal with the threats that we believe exist on that line.”

Kuprewicz, a vocal proponent of vigorously hydrotesting pipelines, said Exxon’s plan would result in some parts of the pipeline being tested at pressures below the minimum level now recommended for pipelines like the Pegasus. That’s doubly true if Exxon opts to lower its maximum testing pressures along the way, he said.

A pipeline failure analyst who reviewed the document obtained by InsideClimate News was more circumspect.

“I agree with [Kuprewicz] in that there’s some dilution or some decrease in the effectiveness of the [pipeline strength] test based on what they’ve described,” said the failure analyst, who did not want to be identified because of ties to the industry. “Whether or not it fatally flaws [the plan] or not, I’m not in a position to say…I can’t gauge the significance without more information.”

Exxon’s filing covers the Pegasus pipeline between Patoka, Ill. and Corsicana, Texas—a 648-mile stretch made with late 1940s era pipe that can harbor defects near its lengthwise seams. That leg as been shut down since the spill.

Exxon did not respond to emailed questions about the filing.

A metallurgical report concluded that decades-old flaws in the seam area set the stage for the failure, but that something caused hook cracks in the metal to grow undetected during operation until it ruptured. Exxon still doesn’t know what initiated and propelled the crack growth.

Before it can restart the northern part of the Pegasus, Exxon must fulfill the requirements outlined in a corrective action order issued by the Pipeline and Hazardous Materials Safety Administration (PHMSA). The order requires Exxon to submit a work plan that will verify the pipeline’s safety and address “all factors known or suspected in the failure.”

That’s where hydrostatic testing comes in.

Hydrostatic pressure tests involve filling the pipe with water at pressures well above levels it experiences when the line is running. Such tests are commonly used to check for leaks and determine safe operating pressures. They can also verify the pipe’s strength by forcing problem areas to fail during the test. Each leak or rupture gets repaired and the pipe gets retested until it holds the pressurized water without incident.

The last time Exxon hydrotested the northern section of the Pegasus—in 2006—the pressure test it conducted was at levels that are not sufficient for verifying the pipe’s strength or removing dangerous cracks. Even so, there were 11 seam weld failures and three pinhole leaks detected and fixed.

First, the peak testing pressure mentioned by Exxon is being described as an “initial target,” leaving open the possibility that the test pressures could be lowered during the hydrotests.

Second, the company said the peak pressure would be measured at the lowest point of the pipeline segment being tested. That means test pressures will be lower for pipe that is installed at higher elevations. In places where the pipeline travels up or down a hill, the steel at the top would not be stressed to recommended levels for problem pipe, Kuprewicz said.

Third, Exxon’s plan says that “if a significant number of pressure reversal failures occur, [it] may decide to reduce the targeted pressures in order to complete the testing in a more efficient manner.”

What that means is that “you’re willing, if you get too many failures, to drop the quality of the hydrotest,” said Kuprewicz. “The whole concept of hydrotesting is you take the big [problems] to failure. So if the objective now becomes ‘make the test fast by lowering the pressure,’ then you’ve left larger anomalies in your pipeline.”

Exxon’s plan is under review by PHMSA, which must decide whether to approve it or seek changes. Exxon already has PHMSA’s approval to restart the southern leg of the Pegasus, which carries crude oil 210 miles through Texas, from Corsicana to Nederland near the Gulf Coast.

In its proposal, Exxon said it would begin the hydrotests at the northernmost end of the pipeline. It said it would conduct 27 separate hydrotests in four phases, beginning as soon as July. Exxon said they could take up to one year to complete and another year after that to update its risk assessment for the Pegasus and to adjust its prevention and mitigation measures to reflect the new testing information.

If regulators are satisfied with the Pegasus hydrotests, they could allow Exxon to restart the pipeline before completing the year-long final analysis of the testing data. That’s because a properly conducted hydrotest forces companies to make immediate repairs to problems found during testing. In addition, a well-designed hydrotest should clear the line of any flaws that could cause a leak within five years.

Kuprewicz hopes the effort will do what it’s intended to do, which is reassure regulators and the public that Exxon can operate the Pegasus safely.

“The good news is [Exxon] agreed they’ve got to do a hydrotest,” he said. “Let’s be sure we do a prudent one.” 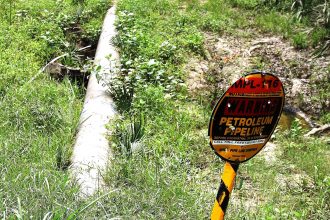