An Enbridge pipeline that spewed 50,000 gallons of crude oil over a Wisconsin pasture on July 27 could be reopened as soon as today, according to a consent decree the pipeline’s Canadian operator signed with the U.S. Department of Transportation on Monday.

Enbridge assured federal regulators it could safely send oil though the 467-mile line and that it had also developed a plan to ensure that all 1,900 miles of its Lakehead system were safe.

Enbridge already faces a record $3.7 million fine for a 2010 pipeline accident, which released more than 1 million gallons of Canadian dilbit, an especially heavy form of crude oil, into Michigan’s Kalamazoo River. A section of the river remains closed today as the cleanup continues.

Both the Michigan and Wisconsin lines are both part of Enbridge’s Lakehead system. The Wisconsin line, which Enbridge said was carrying conventional oil when it ruptured, had suffered blowouts in the past and had a history of structural defects documented from the time of its 1998 construction.

Staff from the Pipeline and Hazardous Materials Safety Administration (PHMSA) worked with Enbridge through the weekend to make sure the plan to restart the Wisconsin line met the agency’s requirements.

The consent agreement goes beyond simply allowing the company to reopen Line 14, said PHMSA spokesman Damon Hill. Enbridge also must reassess its management style and address safety requirements in the coming weeks and months with constant review by PHSMA.

“It’s not just for the immediate time but into the future,” Hill said.

Carl Weimer, executive director of the Pipeline Safety Trust, a nonprofit watchdog organization based in Bellingham, Wash., said PHMSA was under industry and political pressure to get the line open as quickly as possible. The line carries 317,600 barrels of oil a day to refineries at Moken, Ill., near Chicago.

People may not pay attention to a ruptured pipeline but they pay attention to the price of gas, Weimer said. News reports said Line 14’s shutdown caused a record spike in Chicago wholesale gasoline prices as supplies tightened, with ripple effects on the Gulf Coast and Northeast. “The reality is when a pipeline fails it may be one of the few sources to get oil to market or gas to gas stations,” Weimer said.

Enbridge submitted a 36-page safety plan to PHMSA that addresses the safety of its Lakehead system. It also submitted a 17-page plan that is specific to Line 14 and sets out everything from priorities for pipeline replacement to enhanced training and improving leak detection systems.

According to the plan, the restart of Line 14 must happen during the day. Emergency responders along the entire length of the line must be notified of the restart time. And the pipeline must be patrolled from the air and ground to inspect for leaks.

The most critical part of the plan calls for no part of the line to be pressurized to more than 80 percent of the pressure at the time of the blowout. The plan said that an independent consultant Enbridge hired as part of the PHMSA order has done a worst-case scenario assessment of potential defects on the line and concluded that under reduced pressure any flaws would not cause a pipeline rupture.

Enbridge is already well on its way to meeting all PHMSA’s requirements said Enbridge spokeswoman Jennifer Smith, including the establishment of a separate department to oversee pipeline integrity and leak detection.

“We had a number of initiatives in place for operational improvement and had developed plans for others,” Smith said in an interview on Friday. She did not respond to questions on Monday.

In 2011 Enbridge invested about $400 million to ensure the safety and integrity of its systems, according to the company. That amount is set to increase to more than $800 million by the end of this year.

Enbridge also is looking to see if there is new technology or equipment that would improve safety.

“If there is something out there and we are not using it we need to be looking to see if we should be using it,” Smith said.

In an open letter posted on the company’s website, Enbridge president Anthony Monaco asks that the company’s spills be put in perspective.

“Pipeline safety has been much in the news lately, and so it’s important to give the issue some context – to look beyond the latest headline and recognize the outstanding long-term safety record of this important energy delivery system,” the letter said. “In fact, decades of experience has shown that pipelines are by far the safest, most efficient method of transporting large volumes of oil.

“Over the last decade we’ve transported almost 12 billion barrels of crude oil with a safe delivery record better than 99.999 per cent.” 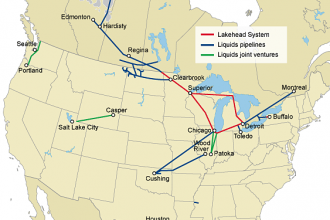 Regulators Get Tough on Enbridge 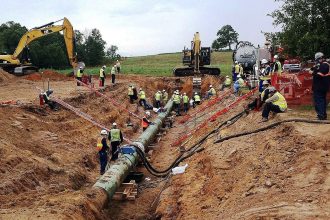