This story was updated on Jan. 8 at 12:10 pm to include comments from Vermont State Treasurer Elizabeth Pearce.

Vermont Gov. Peter Shumlin said on Thursday his state should take action against climate change this year by divesting public pension funds from coal and from oil giant ExxonMobil, because of its history of sowing doubt about climate change despite the company’s own scientists having studied it.

Speaking at his annual State of the State address, Shumlin said, “The urgency for us to take every sensible action against climate change has never been greater.” He asked his legislature to send him a bill that would divest the state’s public pension funds from all coal stocks, as well as from stock in Exxon.

“Vermont should not wait to rid ourselves of ExxonMobil stock,” he said. His speech referenced the findings of an eight-month InsideClimate News investigation, which found that Exxon scientists had known about climate change and its dangers decades ago but the company did not share its findings with the public or shareholders.

“It has been clearly documented that since the 1980’s, ExxonMobil’s own scientists have long known about the dangers of global warming, and chose to conceal that from the public,” Shumlin said in the speech. “At the same time that they were building their oil rigs taller to account for rising sea levels, they were funding front groups of scientists to deny climate change is real. This is a page right out of Big Tobacco, which for decades denied the health risks of their product as they were killing people.”

Last November, the office of New York Attorney General Eric Schneiderman announced it was investigating Exxon on climate change and subpoenaed the energy company to turn over four decades of internal communication on the issue by Dec. 4. The company missed the deadline and it may take Exxon well into this year to fully comply with the order.

Several senators including Vermont Sen. Bernie Sanders, a presidential hopeful, have also asked the Department of Justice to open an investigation into Exxon’s climate history. “The information that has come to light about Exxon’s past activities raises potentially serious concerns that should be investigated,” Sanders wrote in a letter to federal officials. While on the campaign trail, Sanders has repeatedly criticized Exxon’s climate efforts and advocated for strong climate action nationwide.

Shumlin is the first governor to specifically call for divestment from ExxonMobil, but he follows in the footsteps of California Gov. Jerry Brown. Last October, Brown signed into law regulation requiring the state’s two major public pension funds, which are worth a combined nearly $500 billion, to divest from coal and also explore divesting from other fossil fuels.

“Let’s remember Vermont is downwind of the coal fired plants to our West; we’re the tailpipe to their dirty energy choices,” said Shumlin. “Their pollution sickens our children, creates acid rain, dumps mercury on our forests and in our lakes and increases greenhouse gas emissions. I ask that you send me a divestiture bill just like California’s. While you’re doing that, Governor Brown and I will invite other Governors to join us in what should be a national effort.”

“It’s great that Vermont may join states like California in divesting from coal—and even better that Governor Shumlin has taken the lead by saying no government should be invested in Exxon, as perhaps the greatest scandal in corporate history begins to unfold,” Bill McKibben, founder of the environmental group 350.org and a current resident of Vermont, said. “Today is a great win for the thousands of Vermonters who have joined this fight, and it will give us new vigor to keep pushing on many fronts!”

“This is great news, and it shows how much momentum the fossil fuel divestment movement has built in New England and beyond,” Emily Kirkland, a divestment activist based in Cambridge, Mass., said in an email. “It’s time for Governor (Charlie) Baker to take it a step farther by calling on Massachusetts to divest from all fossil fuels, not just coal,” said Kirkland, the communications coordinator for environmental organizations Better Future Project and 350 Massachusetts. Legislators proposed a pension fund divestment bill in Massachusetts last year that has yet to be voted on.

Vermont lawmakers have proposed several fossil fuel divestment bills in recent years, including one in 2015, and none of them have ever gotten to a vote. Last May, the Vermont Pension Investment Committee voted against both full and partial fossil fuel divestment. “We were not created as an agent of social change,” said VPIC chairman Stephen Rauh.

Elizabeth Pearce, Vermont State Treasurer, said in a statement that although she shares Shumlin’s “concerns regarding climate change … I believe that divestment is not the appropriate strategy for our funds and is counter to our fiduciary responsibilities to the fund and its beneficiaries.

She added, “I look forward to working with the Governor and the Legislature to identify alternative approaches that meet the same objectives without putting taxpayer dollars and retirement security at risk.”

Shumlin ignored Vermont’s past record on divestment during his recent speech. “Owning ExxonMobil stock is not a business Vermont should be in,” Shumlin said. 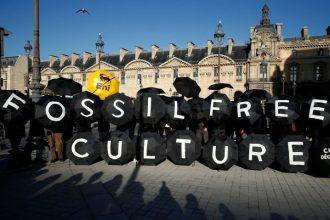 2015: The Year Divestment Hit the Mainstream 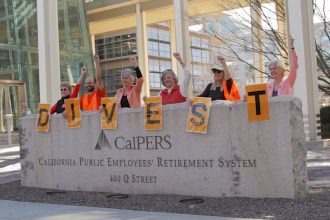 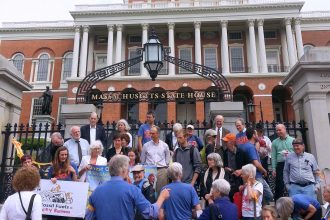