As the shale gas boom was making its way into Ohio in 2012, University of Cincinnati scientist Amy Townsend-Small began testing private water wells in Carroll County, the epicenter of the Utica Shale. Her project, which includes samples of more than 100 wells, is one of the few sustained efforts in the nation to evaluate drinking water quality before, during and after gas drilling.

Although it will likely be another year before Townsend-Small releases the results, her work offers a template for other communities worried about how drilling, fracking and producing unconventional natural gas might contaminate groundwater supplies.

Most residents test their water only after they suspect it has been polluted; few have the resources or foresight to conduct baseline testing prior to the drilling.

The tests cost hundreds of dollars, “so it’s not something everybody can afford to do regularly,” said Townsend-Small, an assistant professor in the geology department.

Once her sampling results are published, the data points won’t be matched with specific locations, in order to protect residents’ privacy and to avoid affecting property values.

Townsend-Small’s team offers free water testing about four times a year to interested landowners in and around Carroll County. She uses drilling reports the industry files with Ohio regulators to determine which water samples were taken near active gas wells.

Each sample is tested for methane, the main component of natural gas. Townsend-Small’s lab uses isotopic analysis to “fingerprint” the methane to determine if it’s “biogenic methane” (produced by microbes, and unrelated to natural gas drilling) or “fossil fuel methane” (methane found in oil, gas and coal deposits). The samples are also tested for pH and the presence of salts.

Methane can leak due to poorly-constructed gas wells. Although dissolved methane doesn’t pose a health risk, high levels of methane can lead to explosions. Townsend-Small said some of the baseline samples in Ohio have shown surprisingly high concentrations of biogenic methane, even near levels that might allow people to light their tap water on fire.

The project was inspired by a 2011 peer-reviewed study from Duke University, where researchers found higher levels of fossil fuel methane in water wells within a kilometer—or 3,281 feet—of active gas wells in the Marcellus Shale. The study did not find any fracking chemicals in the water.

Townsend-Small said the Duke study was “a really good paper,” but it was criticized because the scientists hadn’t taken baseline samples. That raised the possiblility that the methane had come from other sources, such as shallow gas deposits unrelated to deep shale extraction.

Ohio law requires gas companies to test water wells for methane prior to drilling, but it only applies to wells within 1,500 feet of a proposed shale gas well. Townsend-Small’s team will sample any resident’s well, regardless of its proximity to active drilling sites.

“It’s a really good opportunity we have in Ohio, to start early” before the drilling takes off, Townsend-Small said.

Last winter, she presented preliminary results from her study at a community meeting, where she explained that some water wells showed biogenic methane. None of the wells in her presentation were located near gas drilling, so she found it frustrating when a local paper said her results showed “hydraulic fracturing has had no impact on water quality.”

Townsend-Small said she had trouble finding financial support for her Ohio project. “The federal government doesn’t fund universities to do [water] monitoring, because that’s the job of the EPA and the state agencies. But they’re also not doing it.”

Her work is currently funded by the Deer Park Foundation, the Alice Weston Foundation and individual donors. 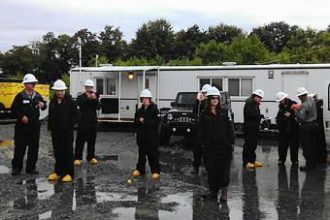