Given the choice between renewable energy and fossil fuels in several states, voters delivered mixed results on Tuesday.

In the most watched climate-related ballot initiative, Washington voters rejected a carbon fee. Elsewhere, residents in swing states voted to accelerate the transition to renewable energy and to ban offshore oil and gas drilling.

The vote in Washington went against its governor, who favored the effort to put a price on carbon pollution. In Nevada, voters called for an even more ambitious renewable energy goal than one that had been vetoed by their governor. In Colorado, they rejected limits on drilling, bowing to the wishes of the fossil fuel industry and some state and local officials.

Florida law already bans oil and gas leases in state waters. But there has been perennial political pressure on Florida to lift the ban. By putting it in the state Constitution, the restrictions will be much harder to change.

The drilling ban doesn’t deter drilling in federal waters off Florida, though. When the Trump administration announced plans to expand offshore drilling in the Gulf of Mexico and off the Atlantic and Pacific coasts, Secretary of the Interior Ryan Zinke said he would exempt Florida based on the wishes of Republican Gov. Rick Scott, who was running for U.S. Senate, but that could change.

The Florida measure passed with nearly 70 percent of the vote, according to unofficial results, surpassing the 60 percent needed to amend the state Constitution.

Washington’s Initiative 1631 would have established the nation’s first escalating carbon fee. It was the second time voters there had spurned a price on carbon. It also was a victory for the fossil fuels industry and evidence of its continuing power to influence public opinion.

The oil industry, led by BP America and Phillips 66, poured millions of dollars into a campaign to defeat the carbon fee. The escalating fee would have been charged to large carbon emitters and fossil fuel sellers, who would have passed the costs down to consumers, encouraging people to cut back on fossil fuel use.

Mike Stevens, state director of the Nature Conservancy, told the Seattle Times the fight wasn’t over yet and the group was looking at ways to get legislation passed in the coming year.

Arizona’s Proposition 127 would have required utilities to get half their electricity from renewable sources by 2030, up from the current target of 15 percent by 2025. Voters rejected the initiative by a wide margin, handing the latest in a long string of defeats to an effort to boost solar power in one of the nation’s sunniest states.

Arizona’s abundant sunshine has made solar competitive with—and sometimes cheaper than—natural gas. Yet the state’s largest utility, Arizona Public Service, has resisted efforts to expand its renewable energy portfolio. APS and its parent company spent more than $20 million to defeat Proposition 127. The state generated only 6 percent of its electricity from solar in 2016.

California billionaire Tom Steyer, who supported the initiative, blamed its failure on the decision of Republican Arizona Attorney General Mark Brnovich to alter the initiative language to include that the state would be required to achieve the standard “irrespective of cost to consumers” if adopted.  That language was then used by Arizona Public Service in its ads opposing the measure.

“It’s a straightforward reflection of the corruption that besets our political system,” Steyer said.

Environmental groups can still look for hope in a proposal by one of the state’s Republican utility regulators that would require utilities to get 80 percent of their power from “clean energy” sources by 2050. Thatmeasure, in addition to setting a far longer timetable for the transition, would include nuclear in the clean energy mix, which could help secure the future of the nation’s largest nuclear power plant, Palo Verde Generating Station, near Phoenix, but would also mean less of a role for wind and solar.

California’s Proposition 6 would have eliminated a state gas tax increase and vehicle fees that became law in 2017.

Instead, voters decided to keep the increase and rejected a Republican effort to amend the state Constitution to require voter approval for future fuel tax increases.

The 12-cent increase raised the state’s gas tax to almost 42 cents a gallon, with a higher tax on diesel. Supporters argued that the $5 billion a year that the tax is expected to raise is necessary to fund road work and transportation projects across the state. They note that as vehicles have become more fuel efficient, gas tax revenue has fallen.

Colorado’s Proposition 112 would have required that new oil and gas wells be located at least 2,500 feet from homes, schools and other buildings, as well as waterways. That might have put up to 85 percent of the state and private land off limits.

The measure would have set one of the most protective standards in the country, and would have crimped an ongoing drilling boom in the state. Supporters were concerned about health and safety risks from drilling that has encroached on suburban developments in the fast-growing Front Range corridor.

The energy industry and its supporters, however, won out with a campaign that focused on the potential economic impacts of the measure. They warned that the setback would hurt jobs and deprived landowners of royalty payments.

While the limits would not have applied to federal lands, a win would have presented a stern rebuke to the Trump administration’s efforts to expand fossil fuel development.

Nevada’s Question 6 sets the state on a path to obtain half its electricity from renewable sources by 2030. Because the initiative amends the state’s Constitution, it will require voters to approve it a second time in 2020 before it is enacted. The state’s current standard is 25 percent by 2025.

The initiative drew millions of dollars in support from Steyer, and faced no organized opposition. NV Energy, Nevada’s largest utility, had already committed to expanding its renewable power portfolio and took no position on the measure.

Still, the win is a significant victory for efforts to slash the nation’s emissions at the state level as the Trump administration rolls back federal regulations. It also signals the growing appeal of renewable energy in a key swing state, even as Arizona votes rejected a similar measure.

Through Washington Advisory Vote 19, voters called on the legislature to repeal a tax on oil and petroleum products that was designed to help clean up future oil spills.

The state legislature this spring approved the tax on crude oil and other petroleum products that arrive by pipeline, saying it was necessary given the “severe, irreversible damage” an oil spill can cause to the environment, human health and the economy. Washington already had similar taxes for oil brought into refineries by ship or rail.

State law requires an advisory vote in the general election for any tax increase. The vote is non-binding, however, and the legislature is under no obligation to act on it. 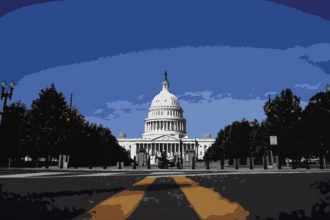 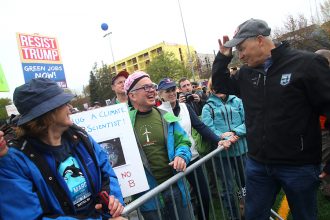 These Voters Could Approve the First U.S. Carbon Fee. Big Oil Is Spending Millions to Stop It.