The 114th Congress opened this week with the latest salvo in the long fight between Republicans and the White House over the Keystone XL pipeline and President Obama’s climate action agenda. But the GOP’s strategy of doggedly challenging the administration’s environmental policies could backfire if it overreaches or impedes the functioning of government.

True to a vow he made after the Republican triumph in the midterm elections, new Senate Majority leader Mitch McConnell made sure a bill mandating federal approval of the controversial pipeline was the first order of business. And the White House said, as it has since the midterms, that President Obama would veto it.

The Nebraska Supreme Court ruled Friday to overturn a lower court’s decision to block a route for the pipeline, removing a hurdle.

The Keystone XL bill, to be taken up in the coming weeks is the first in what promises to be a string of clashes expected to arise from the unrelenting GOP focus on energy and the environment that targets, in large part, administration efforts to tackle climate change.

Led by Sen. James Inhofe, who has called climate change “the greatest hoax” committed against humanity, the powerful Environment and Public Works Committee plans to explore a wide range of measures that would slow or halt Environmental Protection Agency rules to cut greenhouse gas emissions.  Inhofe has also promised to block financing of the $3 billion pledge Obama made late last year to the United Nations Green Climate Fund that helps poor countries cope with the effects of global warming.

Given the abundance of issues that divide Obama and Congressional Republicans, why did the GOP choose energy and the environment as one over which to battle?  Many Republicans genuinely believe that Obama’s climate and energy priorities are dangerously misguided.   But politics, as much as anything else, is driving GOP environmental priorities.

For both parties, the next two years are about defining themselves in contrast to their opponent. The fact that Obama considers action on climate change central to his legacy makes it an inviting target for Republicans. Further, hundreds of millions of dollars in campaign donations to the GOP from fossil fuel interests ensure that climate action will come under attack from the new Congress.

The strategy isn’t without peril for Republicans. Now that they control Congress, they have to show they can govern.  If they try to halt EPA rules by inserting riders into must-pass legislation, they risk looking as if they are willing to sacrifice a functioning government for a narrow policy agenda. If they go after EPA too aggressively, they risk public backlash, similar to what followed when the Newt Gingrich-led Congress elected in 1994 pursued an ambitious conservative makeover of Washington that led eventually to a government shutdown.

“I’m not sure there’s an easy way to say how all this will play out,” said Greg Dotson, the former lead environmental and energy staffer for Rep. Henry A. Waxman (D-CA) and vice president for energy policy at the Center for American Progress, a progressive Washington think tank. “The Republicans will have to be very careful about what kind of leverage they use with the president.”

On the face of it, Republicans might think their approach on the environment is right for the country, said Karlyn Bowman, a senior fellow at the American Enterprise Institute, a conservative Washington think tank.  About six out of ten Americans favor building Keystone XL, according to a poll released in late 2014 by the Pew Research Center.

“They know that the one issue that the public is clearly on their side is Keystone XL,” Bowman said. “As they look at the configuration of the Senate, the issue at least has some bipartisan support.”

A Keystone bill  is expected to pass Congress easily, with some Democrats likely to back the bill, too. But the White House said the president would veto it because he believes authority for approving the project lies with the State Department (and the executive branch, more broadly), and the agency’s review is still underway. Few observers expect the bill to garner the 67 votes needed to override the veto.

Vetoing the bill won’t damage the president’s standing, Bowman said. The same Pew poll showed support for Keystone has slipped by seven percentage pointsover the last year, mainly because a majority of Democrats, for the first time, are now against it.

Pushing the Keystone bill does not hurt the GOP, either. In the two years before the next presidential race, both parties are likely to introduce measures, such as the Keystone bill, that force the other side to take a position and defend it.

Republicans are saying to the public, “‘Here’s a marker, an issue where we differ from the president and you decide'” which is better, Bowman said. “It’s important for Republicans to set down markers for what they are for and what they are against. It’s part of a longer-term strategy.”

On Wednesday, Inhofe released an agenda that said the Environment and Public Works committee  would  “conduct oversight hearings on EPA regulations and work toward legislation…and riders to address”  EPA rules that curtail greenhouse gases from new and existing power plants; measures that cut methane leaks from oil and gas operations; and President’s Climate action plan.

For Inhofe, addressing the rules includes possibly repealing them, said spokeswoman Donelle Harder.  “The phrase ‘to address’ means to hold oversight hearings on the regulations and work with his colleagues to address each regulation as he and his colleagues see necessary,” Harder said.  “If it means to halt it with a Congressional Review Act, then he will work to halt it.”

Already, Inhofe has made it clear he sees no benefit to the administration’s efforts to tackle climate change. “EPA’s regulations under the Obama Administration will increase the cost to do business in America, make our electricity grid less reliable and less affordable, and restrict economic opportunity for future generations,” the agenda said.

The huge influx of political spending by the fossil fuel sector in the last campaign cycle has also pushed Republicans to the barricades, said Dotson and other Washington observers.  Over the last two years, fossil fuel interests spent more than $700 million to shape a Congress that would champion its priorities, according to a December report by the Center for American Progress, based on data from the Center for Responsive Politics and Kantar Media Intelligence/CMAG, as published by the Atlas Project.  The estimate does not include so-called dark money, unlimited amounts of cash that donors can use to support candidates without public disclosure.

The huge financial investment by fossil fuel interests into electoral politics might reflect how threatened they feel these days. Dotson traces that sense of dread back to 2009 when the Obama administration issued its first rule to address climate change: the first round of increases in vehicle fuel economy mandated by the EPA.

“For as long as anyone could remember, oil consumption in the U.S. was projected to increase every year but that changes with the tailpipe rule,” he said. “I don’t think we will ever use as much oil as we did before the rule was adopted, even adjusting for population growth. So you can imagine this threw quite a wrench into the oil industry’s own projections for growth.”

The question is whether Congressional Republicans’ strategy could backfire.  Polls last year showed that younger Republicans favored addressing climate change, including limits on greenhouse gases from power plants. Moreover, picking fights with the president could appease the GOP base and donors but might not wash well with the broader electorate during the 2016 presidential race.

“To swing voters and millennials,  accepting climate change is the price of admission, it’s the baseline position,” said Joshua Freed, Vice President of the Clean Energy Program at Third Way, a centrist Washington think tank.  Referring to the new GOP senator from Colorado, he said, “There’s a reason Cory Gardner stood in front of wind turbines in a campaign ad.” 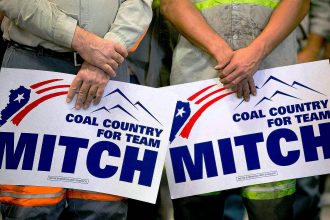