The Nebraska Supreme Court on Friday upheld the Keystone XL pipeline’s route through the state—removing the last obstacle barring President Barack Obama from making his long-awaited decision on whether or not to approve the project.

The court ruled against landowners who had challenged the constitutionality of a 2012 state law that gave the governor unilateral authority to approve pipelines and the use of eminent domain—a power previously held by the state’s Public Service Commission. A majority of judges—four out of seven—ruled with the landowners that the law was unconstitutional. However, a supermajority of five judges is needed to overturn legislation in Nebraska. Therefore, “the legislation must stand by default,” the ruling stated.

All eyes are now on President Obama, who had used the pending Supreme Court case as a reason for delaying his verdict on the controversial project, which is expected to carry approximately 830,000 barrels of carbon-heavy crude oil per day from tar sands in Alberta, Canada to refineries in Texas.

“The only decision that will bring peace of mind to landowners is watching the president use the power of the pen to stop this risky pipeline once and for all,” said Jane Kleeb, director of Bold Nebraska, one of the grassroots groups spearheading the fight against the pipeline.

President Obama has good reason to make a decision on the presidential permit for the project, required since the pipeline crosses an international border, sooner rather than later. Republican leadership has promised to make the project’s approval a top priority this year. The House approved legislation on Friday that would force approval of the pipeline, and the Senate will vote on its own similar bill sometime in the coming weeks. The White House reiterated Friday after the ruling that it would veto the legislation. Still, Congress could include a Keystone rider in nearly every future bill it passes, putting Obama in a politically difficult position.

“President Obama is out of excuses for deciding whether or not to allow thousands of Americans to get back to work,” Senate Majority Leader Mitch McConnell (R-KY) said in a statement. “Today’s ruling provides the perfect opportunity for the President to change his unproductive posture.”

At the same time, public pressure to act on climate is steadily growing, as the science becomes more unequivocal than ever. President Obama is also committed to helping broker a Paris climate change accord at the end of the year that would commit all the world’s nations to a climate solution.

Obama has spoken more frequently about the pipeline in recent months, dropping hints about the direction he may take when decision time comes. During a trip to Myanmar in November, the president challenged the idea often pushed by proponents of the project that the Keystone XL will increase American energy security and create jobs. “Understand what this project is,” Obama said. “It is providing the ability of Canada to pump their oil, send it through our land down to the Gulf where it will be sold everywhere else.”

During an appearance on the Colbert Report in December, he told the crowd, “We’ve got to make sure that it’s not adding to the problem of carbon and climate change. We have to examine that, and we have to weigh that against the amount of jobs that it’s actually going to create, which aren’t a lot.”

He also spent a good chunk of time addressing the issue during his end of the year press conference in late December. “I think that there’s been this tendency to really hype this thing as some magic formula to what ails the U.S. economy,” he told reporters.

Climate advocates are hopeful that Obama will deny the permit for TransCanada, the Canadian energy company behind the pipeline. The Nebraska Supreme Court decision means that the Keystone XL will still cross a very vulnerable part of the Ogallala Aquifer, the United States’ most heavily used aquifer that supplies about 30 percent of the groundwater pumped for irrigation nationwide and the drinking supply for nearly 2 million Americans.

Opponents of the pipeline also argue Keystone XL doesn’t pass Obama’s “climate test,” an idea he first introduced in 2013, when he said he would only approve the project if it didn’t significantly exacerbate climate change.

In its final 2014 environmental impact statement on the project, the State Department found that the Keystone XL would have little effect on carbon pollution, because, it reasoned, with or without the pipeline Canada’s tar sands oil production would increase. But a market analysis in that statement also acknowledged that if oil prices went below $75 for a long time, the Keystone XL would become a crucial factor for expanding the tar sands enterprise and enable a significant increase in emissions of greenhouse gases. Oil prices are around $48 per barrel.

“This [Nebraska] ruling has no impact on the fact that the Keystone XL tar sands pipeline fails President Obama’s climate test, threatens our water, and is a bad deal for the American people,” Tiernan Sittenfeld, senior vice president of government affairs for the League of Conservation Voters, said in a statement. “We remain more confident than ever that he will reject this dirty and dangerous pipeline once and for all, and with today’s Nebraska decision behind us, we urge him to do so as quickly as possible,”

The White House announced on Friday the State Department is examining the Nebraska Supreme Court’s decision as part of its national determination study. “As we have made clear, we are going to let that process play out,” said White House principal deputy press secretary Eric Schultz.

The next step will be calling for federal agencies like the Environmental Protection Agency, the Fish and Wildlife Service and the Department of the Interior to finish their individual analyses of the project, which will then be used in the State Department’s final recommendation. 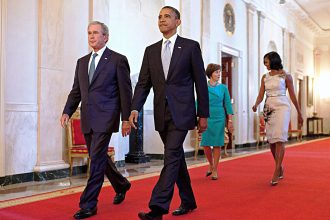