Southern California Gas Co. has agreed to pay $8.5 million to settle a lawsuit with local air quality regulators over a massive methane leak at its Aliso Canyon natural gas storage facility in 2015. This includes $1 million to fund a three-part health study of the communities impacted by the gas leak.

This settlement, agreed to on Tuesday, ends months of negotiations between the utility and regulators at the South Coast Air Quality Management District (SCAQMD) over what it is now considered the largest gas leak in the nation’s history.

The leak was first detected at SoCalGas’ Aliso Canyon facility in October 2015. An estimated 97,100 metric tons of natural gas were released into the atmosphere before the leak was plugged about four months later. During that time, hundreds of people living near the site reported health problems, including headaches, dizziness, rashes and irritation to eyes, noses and respiratory systems. Even after the leak was plugged, however, some residents have continued to experience health problems and health experts don’t know why.

The study included in the settlement aims to provide some answers. The assessment will include three parts and be conducted by independent experts. Researchers will use modeling to determine what concentrations of chemicals the impacted community was exposed to. There will also be a community health survey, as well as an analysis of possible associations between symptoms reported in the community and estimated exposure levels.

“Consistent with the commitment we made last year, SoCalGas has agreed to fund AQMD’s health study,” the company announced in a recent statement. “We are pleased to have worked with AQMD to settle this and other matters.”

The California utility had proposed paying $400,000 for a less-comprehensive health study last May.

Wayne Nastri, SCAQMD’s executive officer, said in a statement: “We are pleased to immediately kick off the process for an independent health study. This study will build upon existing health information and help inform the community about potential health impacts from the gas leak.”

Some officials and local advocacy groups were not pleased with the scope of the health study.

“It’s a study, but not a health study,” Angelo Bellomo, deputy director for health protection at the Los Angeles County Department of Public Health, told the Los Angeles Daily News. “It is not responsive to addressing the health needs and concerns to this community. More importantly, it’s inconsistent with advice given to AQMD by health officials.”

“AQMD sold us out and LA County Public Health agrees,” the Save Porter Ranch activist group wrote on its Facebook page. “What should have been a $40 million long-term health study is only a $1 million health risk assessment.”

The details of the study have yet to be determined and the experts who will conduct it have not yet to been selected, Sam Atwood, a spokesman for SCAQMD, told InsideClimate News.

Beyond the health assessment, SoCalGas agreed in the settlement to pay $5.65 million for its leak-related emissions, $1.6 million to reimburse regulators for cost of their air quality monitoring and $250,000 to reimburse officials for their legal fees. 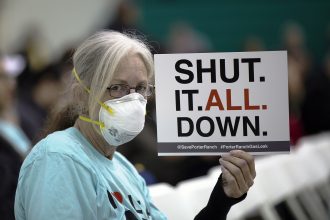 The Air Around Aliso Canyon Is Declared Safe. So Why Are Families Still Suffering? 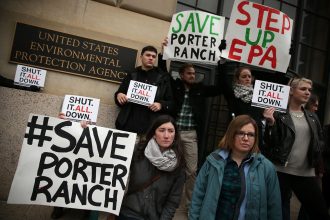