The nation’s most influential evangelist for green jobs, Green For All founder Van Jones, will likely be joining the Obama administration’s green jobs effort soon, though it won’t be as a "Green Jobs Czar," as rumors swirling through the blogosphere are suggesting.

We’re hearing that Jones likely will be tapped to work with Carol Browner and the Council on Environmental Quality in some capacity.

UPDATE: CEQ Chair Nancy Sutley just announced that Jones will join the administration next week as Special Adviser for Green Jobs, Enterprise and Innovation. He will help direct the administration’s efforts to create jobs that benefit the environment, particularly in vulnerable communities.

Jones, who founded the Ella Baker Center for Human Rights in Oakland, Calif., combines two issues in his powerful messages: social justice and environmental stewardship. He believes green jobs can inspire young people to care for and rebuild their communities and that they can give hope to inner-city teens who feel they have no future.

Unlike most federal efforts, Green For All focuses on the micro level, working directly with communities to both encourage community service and to put out-of-work people into paying jobs retrofitting homes and buildings for greater energy efficiency, installing renewable energy technology, even planting trees. The Oakland Green Jobs Corps, with its training and hands-on employment is a prototype for the project.

That level of community focus could become a blueprint for the spending the economic stimulus money that’s on the way.

The American Recovery and Reinvestment Act includes $500 million for job training, plus $78 billion for clean energy, transit and energy efficiency projects. President Obama’s stated goal is to invest $150 billion over the next 10 years to create a workforce of 5 million green collar jobs. Those jobs are increasingly important from an economic standpoint: Last month, the U.S. unemployment rate rose to 8.1 percent; the country has lost 3.3 million jobs over the past six months.

Last fall, while Jones was an adviser to candidate Barack Obama, he called for a $33 billion investment in a Clean Energy Jobs Corps that would put people to work and begin solving our energy problems at the same time:

“If we can connect this work that most needs to be done to the people that most need work, we can fight global warming and poverty at the same time."

Jones called for the next administration to create a Green Jobs Czar. That job doesn’t exist, and we’re hearing that it’s a position that won’t be created, at least not right now.

Still, all signs are pointing to an official appointment for Jones that will tap his prodigious skills as an evangelist for green jobs and stickler for true green investments. Jones gets upset about greenwashing by industries that try to blur the distinctions between truly clean energy and technology that will allow them to continue burning fossil fuels.

That perspective will come in handy with so much money at stake. Jones will need a sense of righteous indignation once he steps into the Washington swarm of high-paid lobbyists and industries greedy for every cent of federal money they can get.

Here’s how Jones defines a true green collar job, from his testimony to Congress in January:

“The simplest definition is that it is a traditional, family-supporting, blue collar job that has been upgraded and up-skilled to better respect the environment. In other words, we are not talking about anything revolutionary. We are not talking Buck Rogers jobs, or science fiction jobs, or George Jetson jobs. These are very familiar jobs in familiar trades – roofers, metal workers, electricians, carpenters, etc. But they have been re-purposed and up-skilled to meet the challenges of a carbon-constrained era."

Those jobs could be in construction, energy, transportation, recycling, manufacturing of energy efficient products, he told members of Congress. He also flashed that charm that makes him such an effective speaker:

"The next Congress can be a Congress of heroines and heroes. If you resolve to turn this economic breakdown into a genuine breakthrough for our planet and our people, it certainly will be.

"If we are smart, we will make the invention, manufacturing and deploying of clean energy technology a cornerstone of the next American economy – and create green pathways out of poverty, while we do it."

UPDATE (March 10): Jones, who leaves for Washington on March 16, will be replaced at Green For All by Phaedra Ellis-Lamkins, the head of the South Bay AFL-CIO Labor Council and Working Partnerships USA who has fought to expand health-care access and raise the minimum wage, Green For All announced. She will become CEO.

“Phaedra Ellis-Lamkins is one of the nation’s most brilliant, inspirational and creative problem solvers for working families," Jones said. "She has a proven track record of success. Under her leadership, Green For All will deliver on the promise of a green economy that is strong enough to lift people out of poverty." 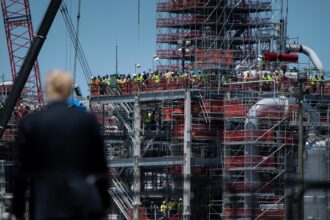