When a group of investors asked Noble Energy, Inc., to report on the risks climate change poses to its business, the company’s response put on display how the Trump administration’s pro-fossil-fuel stance is swaying the perennial debate.

Similar resolutions brought by concerned shareholders have won increasing investor support since the 2015 Paris climate agreement, and grudging acceptance by some in the industry.

Not Noble. The Houston-based oil and gas company urged its shareholders to vote down the resolution, and then it described its vision of an unfettered regulatory future under the Trump administration.

“The current administration and the Republican Congress have adopted policies aimed at increasing the production of domestic oil and natural gas resources and repealed or amended certain executive orders and regulatory policies that have restricted or adversely impacted development,” the company wrote. “In sum, the proposal calls for a report that would be principally based on speculative assumptions about a legislative and regulatory environment that is inherently unpredictable.”

Nearly three dozen shareholder resolutions related to climate change risk have been filed this year with publicly traded oil and gas companies and electric utilities, to be voted on by their shareholders at annual meetings spread throughout the spring. Executives often urge shareholders to vote down such resolutions, and there are concerns this year that the administration’s positions could lead to even more complacency, by both companies and their investors.

Perhaps the most susceptible to ripples of the administration’s assault on climate and environment policies this year are the nearly two dozen resolutions focused on methane emissions and on the impact of measures limiting global temperature rise caused by burning fossil fuels.

Limiting Methane Emissions – or Not

At least six oil, gas and electric utility companies, including Chevron, are facing shareholder resolutions calling on executives to explain the steps they’re taking to minimize emissions of methane, a short-lived climate pollutant that’s one of the most potent greenhouse gases.

While investor groups raise concerns, however, the Trump administration has embarked on a mission—cheered on by organizations like the American Petroleum Institute—to roll back most of the Obama-era requirements for reducing emissions of methane from oil and gas drilling on federal land.

Companies that might be tempted to see the current administration’s behavior as an excuse to delay acting on climate risks should be cautious—administrations change, and the oil and gas industry in particular is built on investments that require weighting risks decades into the future, said Danielle Fugere, president of As You Sow, a non-profit shareholder advocacy organization.

“Investors today are becoming more and more sophisticated when they think about a company’s sustainable future and what that means to their investments,” said Fugere, whose group released a report on Thursday with Sustainable Investments Institute and Proxy Impact tracking this year’s climate-related shareholder resolutions.

“Investments will be made with companies that have a plan for the future; a plan that accounts for a decarbonizing economy where companies are making adjustments to remain competitive,” she said.

Assessing Risk in a 2-Degree World

A block of shareholders led by the Presbyterian Church filed the resolution asking Noble for an assessment of the impact its portfolios would face from policies and technologies that keep warming under 2 degrees Celsius.

It’s one of at least 18 shareholder resolutions this year calling on oil, gas and electric utility companies to conduct a 2-degree scenario analysis.

“A 2-degree scenario analysis of Noble Energy’s future plans will generate a more complete picture of current and future risks and opportunities than business-as-usual planning,” the church’s resolution states. “This report will help Noble identify both vulnerabilities and opportunities for its business and reassure investors that Noble is poised to manage and take advantage of future regulatory, technological and market changes.”

It would be shortsighted of Noble to make decisions based on the Trump Administration’s devotion to fossil fuels, said Rob Fohr, director of Faith-Based Investing and Corporate Engagement for the Presbyterian Church.

“In the short term, I can see where the company has a lot to be excited about,” Fohr said. “But for the long term, it’s not prudent to make plans based on the activities of one administration.”

Shareholders in Kinder Morgan, the largest pipeline and petroleum storage company in North America, are similarly pressing the company for answers about how it is planning for the risks and opportunities presented by goals established by the Paris Agreement.

The company acknowledged in a 2016 filing with the U.S. Securities and Exchange Commission that “greenhouse gas regulations could have material adverse effects on our business, financial position, results of operations or cash flows.” An investor group led by Zevin Asset Management wants to know what Kinder Morgan is doing about it.

“Currently, our company only provides business-as-usual planning and risk analysis, which is not sufficient to prepare for a set of risks as large and complex as climate change,” the shareholder resolution states. “The requested report will reassure investors that KMI is poised to manage and take advantage of future regulatory, technological, and market changes.”

Last year, investors in Exxon and Occidental Petroleum Corp. broke through with successful shareholder votes on resolutions seeking annual disclosures that take into account what part of a company’s oil and gas portfolio remains economically viable in the face of global efforts to limit global warming. Exxon’s shareholders, who had voted down similar resolutions in the past, tipped to 62 percent in favor of disclosure.

“Shareholder engagement has ratcheted up to a new level with enhanced collaborations and strategies, even as some corporate leaders determined to undercut basic shareholder rights have a sympathetic ear in Washington,” Andrew Behar, CEO of As You Sow, wrote in the report on 2018 shareholder resolutions.

Under the mounting pressure, Exxon released a report earlier this year addressing the risks the company faces from climate change and from government efforts to rein in carbon dioxide emissions from fossil fuels, though some shareholders believe it fell short.

In a presentation to investment analysts Wednesday, Exxon officials discussed their projection for modest efficiency gains and shifts to lower-carbon sources over the next two decades—and for continued strong global demand for fossil fuel. “Why keep investing in the oil and gas business?” asked Pete Trelenberg, the company’s manager of environmental policy and planning. “Well, because there’s demand.”

Occidental has pledged to also to issue a report on the risks that climate change poses to its business no later than June. And other companies, including ConocoPhillips, have voluntarily agreed to perform such assessments.

In the face of pending resolutions this year, two coal-reliant electric utilities in the Midwest—WEC Energy Group and CMS Energy Corp.—agreed to publish assessments of the long-term business impacts on their companies of limiting global warming to under 2 degrees

Oil and gas companies in particular face tremendous pressure to accurately identify long-term capital projects that are essential to the growth and prosperity of the business, Fohr said. An oil company that banks on future projects—new oil fields, new refineries—without fully calculating all risk factors puts itself and its investors in jeopardy.

“A wrong assumption about the future because of one administration’s friendly oil and gas position that leads to misallocation of capital puts the company at risk for stranded assets in the future,” Fohr said.

One of the biggest shareholders demands outside of direct climate impact is for more information about companies’ political lobbying. Shareholders in at least 11 oil and gas companies and electric utilities want to know how company money is being spent to influence public policy—including on climate-related issues, according to the new report and shareholder resolution tracking by Ceres.

The resolutions cite millions of dollars spent by the companies to flex their public policy muscle. Exxon and Chevron, for example, spent more than $94 million and $70 million respectively since 2010 on federal lobbying to influence political thinking and public perception, according to the resolutions.

Some of the resolutions call out companies for financially supporting organization such as the American Legislative Exchange Council (ALEC), the American Petroleum Institute and Koch Groups—all with a history of fighting climate policies. The shareholders argue that associating with anti-climate organizations damages a company’s reputation and could adversely affect stock value.

If money is spent to purchase influence, it should pay for efforts to promote policies that call for mitigating and adapting to climate change, reduce the use of fossil fuels and focus on renewable energy, shareholders wrote in a resolution filed with Devon Energy.

Last year, Devon executives told shareholders in recommending a “no” vote on a similar resolution that the company was “committed to conducting our business lawfully, ethically and in a socially and environmentally responsible manner. … We also believe that participation in the political, legislative and regulatory processes—at all levels of government—is vital to our business.”

Exxon, in urging a “no” vote on a political spending disclosure resolution last year, wrote that its activities “comply fully with the spirit and letter of all federal and state lobby disclosure requirements.”

Investors will be paying attention to how much companies drag their feet on climate issues, Fugere said.

“These are sophisticated shareholders who have an interest in a sustainable world and investments in companies with stable business models that will protect their investments—and understand that they are related,” she said.

Natasha Lamb, an executive with Arjuna Capital, which has filed several resolutions on behalf of shareholders in recent years, said investors increasingly recognize the risks. “Now that the broader investment community has taken notice, it’s time for companies to accept,” she said. 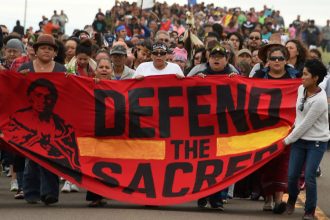