PARIS —After years of debate over whether it is adequate or even possible to limit global warming to 2 degrees Celsius, negotiators in Paris are suddenly nodding more in the direction of 1.5 degrees. Why?

Mostly, it’s a matter of climate science—not of backroom deal-making, green ideology or cold-blooded calculations about how fast the world’s nations are willing to change.

The latest science shows that a mere half degree of extra warming between now and the end of the century could mean profound changes for the planet and many of its inhabitants.

An expert review published by the UN several months ago offered several sobering examples of the difference between the 1.5 degree and 2 degree pathways.

“Most terrestrial and marine species would be able to follow the speed of climate change,” it said of the 1.5 degree track. “Up to half of coral reefs may remain; sea level rise may remain below 1 meter; some Arctic sea ice may remain; ocean acidification impacts would stay at moderate levels; and more scope for adaptation would exist, especially in the agricultural sector.”

So the striking shift toward the 1.5 degree goal that seems to be emerging in Paris shouldn’t be dismissed as crassly political. It’s not just bait to draw more nations into embracing the treaty. Rather, it is an acknowledgement that an extra half degree of warming would indeed hit many of them harder than others.

Nor is it blithely ideological. If the most vociferous campaigners like Greenpeace, Oxfam and Friends of the Earth have rallied around the 1.5 degree mark as an article of faith, that was not just to make bolder headlines, but because they saw the writing on the wall earlier than some political leaders did.

And it’s not a Pollyannish prescription that refuses to acknowledge how difficult it would be to hit the 1.5 target. Rather, this is a decision not  to shrug off the very science that is the at the heart and soul of the treaty process.

Judging by an update issued late Tuesday night by a Paris subcommittee hashing out the different perspectives, the main question now seems to be how much weight to give the 1.5 degree goal.

Most parties, the subcommittee reported, want “to somehow reflect the 1.5 degree C temperature limit” in the section of the pact that describes its ultimate purpose.

The middle of these options seemed to come closer to what the UN’s expert review advised, which was “to take a precautionary route by aiming for limiting global warming as far below 2 degrees C as possible, reaffirming the notion of a defense line or even a buffer zone keeping warming well below 2 degrees C.”

But is any course below 2 degrees really practical? There are plenty of doubters.

John Holdren, the White House science advisor, told the Atlantic: “The basic answer is the lower the better, but it will be a big challenge to stay under 2. And 1.5, I would say most technical experts would dispute that 1.5 is attainable.”

Even so the UN’s expert advisers were not dismissive of 1.5’s feasibility in their report:

“In general, pathways limiting warming to below 1.5 degrees C by the end of the century are similar to those limiting warming to 2 degrees C,” they said, “but call for more immediate mitigation action and an additional scaling-up of the challenging features of the 2 degree C scenarios, such as the scaling-up of CO2 removal technologies and of the full set of low-carbon technologies.”

Everybody in Paris recognizes that whatever goal the treaty pronounces, it will be hard to meet.

The pledges brought to Paris by nations promising to cut their emissions don’t come close to meeting either goal. The treaty is designed to bridge any emissions gap over the next 15 years of so by constantly reviewing each pledge and ratcheting them all up until the goal comes within reach.

But the gap turns out not to be much different whether the target is 2 degrees or 1.5 degrees, according to the latest assessment by the United Nations Environmental Program (UNEP).

To have a good chance of keeping warming within 2 degrees, total emissions by the year 2030 should be in the range of 42 billion metric tons of carbon dioxide; the comparable figure for 1.5 degrees of warming would be 39 billion tons.

So it’s hard to argue that one gap can be surmounted, but not the other, given enough political will.

“The trajectories for the two target levels are similar in many aspects,” UNEP concluded, “but earlier and much stronger action is necessary for the 1.5 degree C target to be kept.” 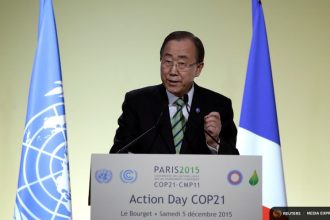 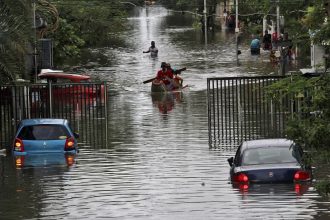 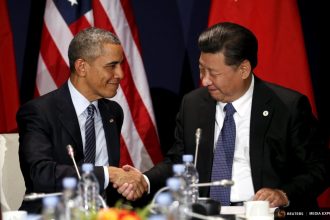