As President Barack Obama begins the gargantuan task of selling his climate agenda to the American people, in his corner are wealthy donors he can count on to help him get what he wants.

From Wall Street whizzes to franchise owners, these donors have poured time and money to further the president’s climate agenda. But two stand out: Tom Steyer, a San Francisco-based hedge fund manager, and Chris Hughes, a Facebook co-founder.

Steyer and Hughes are hardly equal counterweights to the billionaire Koch brothers—two of Obama’s fiercest opponents—who for decades have quietly used their wealth and influence to thwart action on climate change. Charles and David Koch are each worth $34 billion, according to Forbes. Steyer is worth about $1.4 billion and Hughes about $700 million.

Still, these newcomers to the fray are helping level the playing field in what has long been a lopsided fight inside the Beltway for America’s energy future.

Steyer, an Obama donor and friend, is a longtime clean energy champion who was once considered for Secretary of Energy. For months, the 56-year-old hedge fund manager has been putting his muscle and millions behind a high-profile campaign to build public opposition to the Keystone XL pipeline. The offensive may not look like the gesture of an ally—the State Department recently came out with a report that many saw as an endorsement of the project—but if the grassroots protest movement grows and spreads, Steyer believes it could give Obama the cover he needs to reject the pipeline and take a firmer stand on climate issues.

“Climate is on the move,” Steyer said in an interview with InsideClimate News. “The political tectonic plates are shifting on this issue. We are going to keep the pressure on for our leaders to do right—especially for the next generation.”

Hughes, who now owns majority share of The New Republic, is the digital mastermind who helped Obama get elected in 2008. When the 29-year-old took over the Washington, D.C.-based magazine in 2012, he landed an exclusive interview with the president and put him on the cover.

Last month, the White House used Hughes’ influential Washington magazine as a launching pad for Obama’s much-anticipated climate action plan. Hughes declined an interview request, though a New Republic spokeswoman said neither Hughes nor the magazine tried to engineer a role in the rollout. But the move came as little surprise to media commentators.

“If I were a White House press person, I would consider … The New Republic a place where the [climate plan] rollout would likely be given both a serious and sympathetic hearing,” said Eric Alterman, a media critic for The Nation, who has been watching The New Republic closely since Hughes took over.

Just five days before Obama laid out his sweeping climate agenda at Georgetown University, Steyer stood a few miles away at the National Press Club in Washington, D.C. and unveiled a new social media campaign to marshal grassroots opposition to the Keystone XL pipeline, which would move 830,000 barrels of Canadian tar sands crude a day to Texas refineries.

The campaign, called We Love Our Land, bombards sites like Facebook, Twitter and YouTube with petitions, photos and videos detailing the consequences if the pipeline is approved. The message is that the Keystone XL would lock in the United States to a type of crude oil that would exacerbate global warming. It is the latest in a series of efforts by Steyer to kick-start climate action in the United States.

Steyer made his fortune as founder and asset manager of San Francisco-based Farallon Capital Management, LLC, a $33 billion hedge fund. The fund has investments in the energy sector, including in Kinder Morgan, a pipeline operator and competitor of TransCanada, the Keystone XL builder. Last year, he stepped down from the company to focus on political activism. This week, Steyer announced he will divest his own portfolio of Kinder Morgan pipeline company funds.

Steyer has long been involved in clean energy issues. In 2008, he donated $40 million to Stanford University to create the TomKat Center for Sustainable Energy, which fosters the development of new technologies. Since leaving Farallon, he has crisscrossed the country to participate in climate change and anti-Keystone XL rallies.

Last November, Steyer gave a six-minute speech at the Democratic National Convention extolling Obama’s energy and climate credentials. In April, he held a $5,000 per-person fundraiser for Obama in his San Francisco home, where he reportedly had a private conversation with the president. Steyer also created and funded a super PAC that helped Rep. Ed Markey, a Massachusetts Democrat and a vocal Keystone XL opponent, win a seat in the U.S. Senate last month.

“You can think of Steyer as the liberal version of the Koch brothers,” Reuters politics and money correspondent Andy Sullivan said in a recent video report. The Kochs have “spent lots of money setting up conservative organizations that question the validity of climate change and advocate for looser regulations for the oil and gas industry. Steyer is taking the other side of this argument and is putting up lots of money behind the effort as well.”

Steyer told InsideClimate News that his goal is to “rally both the President’s core supporters and the ever-growing number of the majority of Americans who want the president to address climate to help him fight for forward-looking climate policies.

“I believe the president wants to do the right thing.”

Hughes: Quiet and Behind the Scenes

While Steyer has taken a very public approach to aiding Obama in his climate agenda, Chris Hughes played a less direct role. His magazine, The New Republic, was chosen by the White House as a launching pad for the president’s global warming plan.

Hughes’ close personal relationship with and support for the president is well documented. In 2007, the Facebook cofounder left the burgeoning social media site to work on Obama’s campaign as director of online organizing. “I wouldn’t have left Facebook for any other person or at any other time,” Hughes told FastCompany in an interview in 2009.

Their relationship didn’t stop when the campaign ended.

In 2009, Hughes and his now-husband Sean Eldridge were guests of the president at his first state dinner. Last year, Hughes reportedly attended a private dinner with Obama and 20 of the country’s most influential technology stars. He has remained a major donor to Obama and the Democratic Party.

Since buying a majority stake in The New Republic in 2012, Hughes has avoided attending public fundraising events for Obama or making personal statements endorsing the president and his policies. But some media critics say the magazine has occasionally been used as a platform by the president and the White House, including on June 19, when a climate change forum that the magazine sponsored became a preview of Obama’s climate speech the following week.

Planning for the forum began in the spring, when The New Republic teamed up with American University to host an event addressing the future of climate change in the United States. After an introduction by Hughes and a panel discussion, the forum was to culminate in a Q&A with John Podesta of the Center for American Progress.

Just weeks before the event, however, the agenda shifted. The New Republic learned that Heather Zichal, Obama’s deputy assistant on energy and climate, had unexpectedly agreed to speak at the forum, according to Annie Augustine, a spokeswoman for the publication. Zichal’s acceptance of the invitation came at about the time Obama’s grassroots group, Organizing for Action, began signaling on its blog that the president was about to make a big climate announcement. And White House organizers booked space at Georgetown University for a presidential speech on June 25, but they wouldn’t say what it was for.

Zichal used the event to give the public its first glimpse of the president’s climate plan. She talked about how Obama wanted to curb greenhouse gas emissions from power plants. She also said that one of the most effective strategies would be to use the Environmental Protection Agency’s authority to address climate-altering pollutants through the Clean Air Act.

Augustine said the magazine “used the same channels as other media outlets” to request Zichal’s participation and that the forum’s organizers didn’t know what Zichal was planning to say. She also said Hughes was not involved in creating or planning of the event.

Dylan Byers, a media critic for Politico, said it was probably no accident that the White House chose The New Republic to play a role in leaking the plan, though it is hard to know for sure.

“It is clear [Hughes] is comfortable with The New Republic being pro-Obama and progressive,” he said. “The White House knows that if they take something to the magazine, it will be handled in a way they like.”

“Our editors go to great lengths to ensure that The New Republic is of no particular team,” she said. “The pages of the magazine are filled with just as much criticism of the Obama administration as support, if not more.”

As proof, she pointed to the magazine’s July 15 issue. The cover shows Obama with his eyes closed, accompanied by the words, “Snap out of it, Mr. President.”

Steyer and Hughes are among the members of an increasingly powerful donor community, many of whom are pushing the president to take action on climate change and to reject the Keystone XL.

In May, 150 prominent Obama backers, including Vinod Khosla, one of the founders of Sun Microsystems, and Rob McKay, heir to the Taco Bell fortune and chairman of the donor group Democracy Alliance, sent a letter to the president urging him to act quickly on climate change.

“Yours is the last presidency in which it is possible for America to choose a responsible path forward for itself, before climate disruption becomes unmanageably dangerous,” the backers wrote. Some donors have attended rallies and engaged in acts of civil disobedience over the pipeline.

Barry Rabe, who studies the politics of climate change at the University of Michigan and is a fellow at the Brookings Institute, said the donors’ pleas and protests seem to have resonated with the president and his staff.

Several of the key arguments Obama made when he announced his climate plan in a nationally televised speech seemed taken almost directly from donors’ speeches and letters. Obama even used an activist tone, similar to the one his environmentalist supporters often use, as he addressed the crowd gathered in front of him. “Push back on misinformation. Speak up for the facts,” he said. “Make yourself heard on this issue.”

He reiterated that point a few days later in his weekly address. “If you agree with me, I’ll need you to act,” he said. “Educate your classmates and colleagues, your family and friends. Speak up in your communities.”

Rabe said this donor influence makes sense considering it’s anyone’s guess what Obama will do after 2016. He might still need their financial support in his next endeavor, so he’s more likely to make their biggest concerns a priority.

“Obama is going to be a very young when he is done his second term,” Rabe said. “Who knows what he’ll do next, but we’ve never seen a president so engaged in ongoing fundraising. He’s continuing to court donors. It doesn’t surprise me that their voices seem to have influenced this new agenda.”

Correction: An earlier version of this story misnamed the husband of Chris Hughes. His name is Sean Eldridge. 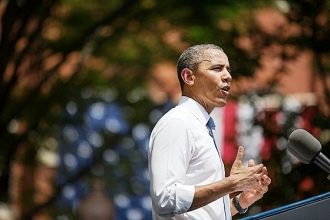 Obama on Keystone: All Things at Once

By Stacy Feldman and Maria Gallucci 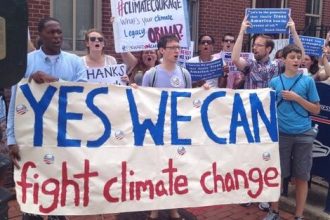