In a major concession to tribal opponents of the Dakota Access pipeline, and brushing aside a fresh court ruling, the Obama administration announced it would not grant a permit for a key portion of the project near Sioux land until further, extensive review.

The administration also said it would reassess how tribal input is taken into account in similar project reviews, and whether the whole approval process needs a comprehensive overhaul. The decision signals that the opposition of Native Americans and environmentalists might have a ripple effect beyond their protest encampments.

The statement was issued Friday by three federal agencies shortly after a federal district court refused to grant an injunction to block the pipeline. It was welcomed by opponents, who saw it as another sign of the power of grassroots mobilization against fossil fuel interests following the drawn-out fight over the Keystone XL pipeline.

Energy Transfer Partners, the builder of the 1,134-mile oil pipeline from North Dakota to Iowa, could not be reached for comment. It has previously said that it is “constructing this pipeline in accordance with applicable laws, and the local, state and federal permits and approvals,” and with technology that can quickly detect spills.

The Standing Rock Sioux tribe of North and South Dakota had sought a temporary halt to construction, which they say threatens water supplies and cultural sites.

The court’s refusal proved to be a short-lived victory for Energy Transfer.

“We appreciate the District Court’s opinion,” said the statement issued jointly by the Justice Department, the Interior Department and the Army. “However, important issues raised by the Standing Rock Sioux Tribe and other tribal nations and their members regarding the Dakota Access pipeline specifically, and pipeline-related decision-making generally, remain.”

The agencies said the Army Corps of Engineers would not authorize construction of the pipeline on its land, which includes an area under and on both sides of the Missouri River, “until it can determine whether it will need to reconsider any of its previous decisions regarding the Lake Oahe site under the National Environmental Policy Act (NEPA) or other federal laws.

“Therefore, construction of the pipeline on Army Corps land bordering or under Lake Oahe will not go forward at this time,” they wrote.

The administration asked the company to voluntarily suspend work on other sections of the project within 20 miles of the river crossing pending the Army Corps’ review.

The Army Corps approved the project in July after reviewing an environmental assessment prepared by Energy Transfer. The agency hadn’t yet issued a permit for the section of the pipeline that would cross the Missouri River at Lake Oahe.

The North Dakota river crossing is half a mile upstream of the Standing Rock reservation. Construction on private land near the river crossing ground to a halt last month after hundreds of Native American protesters occupied an active construction site.

Demonstrators and construction crews clashed again on September 3, after bulldozers destroyed burial and other sacred sites on other private land near the river.

In its statement, the administration defended the right of opponents to demonstrate peacefully, but warned against violence and said that illegal protests or acts of violence or vandalism would be prosecuted.

The administration’s action suggested that the White House is sympathetic to opponents on a number of grounds, including environmental justice and the implications for climate change when the federal government reviews important energy infrastructure projects.

The statement even hinted that new legislation might be needed to correct perceived problems in how this kind of project is reviewed and approved.

The agencies will hold formal government-to-government consultations with Native American tribes this fall on how to better ensure meaningful tribal input on infrastructure projects that may impact tribal lands, resources or treaty rights, according to the statement.

“We are disappointed with the U.S. Department of Justice, the U.S. Department of Interior and the U.S. Army Corps of Engineers’ decision to intervene in this lawfully approved project and continue to postpone the construction of this infrastructure that is so vital to our nation’s energy future,” Ron Ness, president of industry group North Dakota Petroleum Council, said in a statement. “For too long, this project has been mired in a campaign of misinformation and violence that does not consider the greater interests of national security and the state and nation’s economic prosperity. We regret that this decision, which is yet another flagrant overreach by federal government and this administration, will only allow this rancor to continue and result in more trucks and rail cars moving oil.”

President Obama visited Standing Rock in June 2014 and promised to do more for the tribe and other Native American communities. Some pipeline opponents saw Friday’s announcement as an effort to live up to that pledge.

“Today, three federal agencies announced the significant decision to respect tribal sovereignty and stop construction of the Dakota Access Pipeline on Army Corps land,” David Archambault II, chairman of the Standing Rock Sioux tribe, said in a statement. “Our hearts are full, this an historic day for the Standing Rock Sioux Tribe and for tribes across the nation.”

“This is a historic, unprecedented, and overdue move by the Administration that is reflective of the brave and principled stand by the Standing Rock Sioux,” the Sierra Club’s executive director, Michael Brune, said in a statement. “The Tribe has stood up to combat the oppression and injustice they and Native Americans throughout our country have faced for generations, and the Administration was right to recognize it.”

Earlier Friday afternoon, Judge James Boasberg of the Federal District Court in Washington, D.C. denied the Standing Rock Sioux tribe’s request for a preliminary injunction to temporarily halt construction of the pipeline until a lawsuit filed by the tribe could be heard. Boasberg’s ruling stated that the tribe had failed to demonstrate that stopping construction could prevent damage to sacred sites.

“Aware of the indignities visited upon the Tribe over the last centuries, the Court scrutinizes the permitting process here with particular care,” Boasberg wrote in his ruling. “Having done so, the Court must nonetheless conclude that the Tribe has not demonstrated that an injunction is warranted here.”

To prevail in its request for an “emergency” or preliminary injunction, the tribe would have had to demonstrate that continued construction would cause imminent, irreparable harm to historic cultural sites.

The ruling also questioned the tribe’s claim that the Army Corps did not adequately consult them before approving the project.

“In summary, the Corps has documented dozens of attempts it made to consult with the Standing Rock Sioux from the fall of 2014 through the spring of 2016 on the permitted DAPL activities. These included at least three site visits to the Lake Oahe crossing to assess any potential effects on historic properties,” Boasberg wrote.

The tribe has appealed the court’s decision.

The tribe’s ongoing lawsuit against the Army Corps raised additional concerns about the potential for oil to leak from the pipeline and pollute the tribe’s irrigation and drinking water.

The Standing Rock Sioux tribe is one of the poorest communities in the nation with 40 percent of the reservation’s 8,200 residents living below the poverty level.

In a March 11 letter, the Environmental Protection Agency called on the Army Corps to consider “other available routes or crossing locations that would have reduced potential to water resources, especially drinking water supplies,” and to carry out a “more thorough” analysis of environmental justice concerns.

“This is a game changer for our fight against the Dakota Access pipeline,” said Dallas Goldtooth, a campaign organizer for the Indigenous Environmental Network. “We’ll wait to see what [Energy Transfer’s] next move is, but those of us on the ground shall remain.” 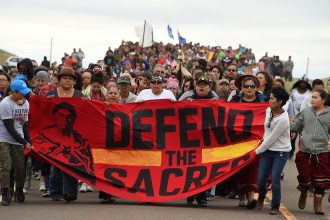 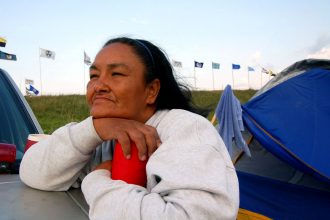 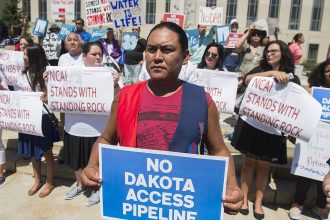 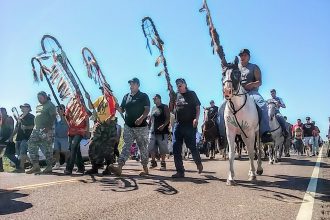