In the tiny hamlet of Hairy Hill, Alberta, a highly energy-efficient grain-fed distillery does what it can to offset some of the greenhouse gas emissions spewed by the province’s dirtier industries—mainly the tar sands.

Hairy Hill is one small gear in Canada’s carbon-control strategy as the nation struggles to rein in its soaring greenhouse gas emissions. And it is one among more than four dozen government-funded projects that officials hope will help persuade President Obama to approve the Keystone XL, the cross-border pipeline that has been immobilized for years as the Obama administration considers its environmental and climate consequences.

But despite its low carbon footprint, the emissions credits the plant earns under Alberta’s complex carbon offsetting scheme are a drop in the bucket compared to what the Keystone would add to the atmosphere.

A close look at the scale of all these offsetting projects—and how they stack up against emissions from the Keystone—reinforces the view of environmental groups and other tar sands opponents that the government is offering far too little.

“The bottom line is, we don’t think it adds up,” said Hannah McKinnon, national program manager for Environmental Defence, a Canadian advocacy group.

Sometime next year Obama is expected to decide whether it’s in the U.S. national interest to let TransCanada, the pipeline’s builder, carry 830,000 barrels a day of tar sands oil to U.S. refineries. In an interview with The New York Times, the president repeated that the Keystone would pass or fail on its global warming merits, taking into account that tar sands production emits several times more greenhouse gases than conventional oil.

“I’m going to evaluate this based on whether or not this is going to significantly contribute to carbon in our atmosphere,” he said. “And there is no doubt that Canada, at the source in those tar sands, could potentially be doing more to mitigate carbon release.”

If Obama was putting an extra burden on Canada, it may be one that Prime Minister Steven Harper is willing to talk about. Harper wrote the president this summer suggesting that as part of a Keystone deal, Canada would be willing to work together with the United States on reducing emissions. The goal: to meet the two nations’ mutual commitments to cut their carbon output sharply by 2020.

Details of the letter, reported by the Canadian Broadcasting Corporation, have not been released. But increasingly, in public speeches and documents, Canadian and Alberta officials are signaling that they would like to arrange a deal in which measures to hold down Canada’s emissions of greenhouse gases could offset the increased emissions that would come from expanding tar sands shipments through the Keystone.

It’s an approach that the U.S. Environmental Protection Agency specifically encouraged when it reviewed the State Department’s draft environmental impact statement on the Keystone, issued in March and now being finalized.

Alberta, in particular, has been emphasizing that it is already moving to control carbon emissions with projects like the one at Hairy Hill, which are financed by revenues from the province’s carbon penalties.

The tar sands crude that the Keystone would carry accounts for roughly one billion extra tons of carbon dioxide over the pipeline’s 50-year lifetime, compared to if it were to carry conventional fuel, according to EPA figures. That’s at least 20 million tons a year.

By comparison, the Hairy Hill project would save a mere 100,000 tons a year. The largest project subsidized by Alberta so far, a carbon-capturing plant known as Shell Quest, would save about one million tons a year.

Alberta’s requirement that industry reduce carbon emissions per unit of production, or offset them by buying credits or paying fines, shrunk emissions by 34 million tons in the first four and a half years that the rule was in force, compared to business as usual. But that’s still small, both compared to the additional output that the Keystone would allow, and compared to the growth in tar sands production during those years.

Even though per-barrel emissions in the Alberta oil patch have dropped 26 percent since 1990, tar sands production increased much faster, so the net effect has been rapid growth in total emissions.

In 2011, the latest year for which Canada has published data, tar sands emissions were up 250 percent since 1990.

Despite years of promises, Canada has never put in place regulations on the oil and gas sector to significantly restrict greenhouse gas emissions, according to McKinnon of Environmental Defence.

This record leaves many environmentalists doubting Canada’s commitment to reduce its overall greenhouse gas emissions by 17 percent by 2020, as it pledged at the Copenhagen climate talks in 2009. The government’s most recent emissions report from last year confirmed that without further controls, Canada would miss the target.

“We have a government that has no intention to be ambitious on this file,” McKinnon said.

In formal comments submitted to the State Department this year as part of the Keystone review, Alberta highlighted its array of green energy projects as important steps in the right direction.

Premier Alison Redford cited them as evidence that Alberta is “North America’s most responsible energy provider,” as her letter put it. Redford boasted of “our proud track record in developing some of the world’s most progressive environmental initiatives.”

But none of the green projects she cited are on a scale that compares to the immense Keystone XL pipeline—certainly not the Hairy Hills project, whatever its merits as a demonstration of a clean, innovative way to produce liquid fuel and electricity.

At the fuel farm, which looks like a tangle of steel pipes and bulbous tanks, starchy wheat is distilled into ethanol in much the same fashion as rye and corn become Canadian whiskey. The ethanol is sold as a blending agent to be mixed with gasoline and burned in cars.

Leftover wheat mash, a byproduct known as distiller’s grain, goes to a nearby cattle yard where it is used as feed. Manure from the feedlot comes back to the fuel plant, to be blended with lawn clippings and waste food from nearby towns, and that mixture is anaerobically composted—producing methane. The methane, in turn, is burned to produce heat and power to run the distillery with the spare electricity sold on the grid. The compost is sold to farmers or gardeners.

The plant produces something else, too: emissions credits for as much as 100,000 tons of CO2 a year, which can be sold to polluters who want to avoid being fined for missing their emission intensity targets under Alberta’s rules.

On a small scale, it is emblematic of an approach that could, if pursued vigorously enough, produce meaningful progress in the campaign against global warming.

But environmental groups say Alberta’s policies are not nearly forceful enough to have the desired effect.

Several years ago, the province required all major industrial sources of CO2 pollution to reduce emissions intensity— the amount of pollution per unit of production—by 12 percent.

Those that did better than 12 percent—a fairly easy conservation target to reach—earned carbon credits. Those that fell short, or chose not to try, could either buy the carbon credits or pay a fine of $15 per ton of excess emissions.

Alberta used the money from the fines to subsidize projects like Hairy Hill—the plant got $5 million, or about a tenth of its up-front cost.

It is one of 49 projects financed so far, all in an attempt to restrain the growth in Alberta’s emissions, which come mostly from several hundred tar sands projects.

In another typical example, Alberta chipped in $5 million toward the $32 million project at West Fraser Mills Ltd., a pulp mill. The money allowed the mill to include anaerobic digestion of its waste sludge, instead of incineration, landfill or disposal as fertilizer on fields. The technology will create methane, which will generate some of the mill’s heat and power, saving 475,000 tons of CO2 over ten years.

The problem, critics of Alberta’s approach say, is that the fine it imposes sets the price of carbon far too low to make a real difference, while the carbon savings that result are far less than the growth of emissions from the tar sands.

Many of the 49 projects that Alberta’s CCEMC is subsidizing are not physical plants like Hairy Hill—they are studies or projects that seek to guide industry toward cleaner performance, but that cannot guarantee any concrete results in tons of carbon saved.

One study, by the tar sands operator Suncor and the Jacobs engineering consultancy, was entitled a “roadmap” for the whole oil sands industry. But its conclusions were modest. Technologies to reduce emissions that were seen as economically feasible in the near term would produce percentage cuts only in the single digits. Technologies that might make a larger contribution were many years off.

The ultimate technology, carbon capture and sequestration, would cost between $100 and $150 per ton of CO2—ten times more than the $15 price on carbon that Alberta has set.

That $15 turns out to be not as burdensome as it sounds for industry.

Long-promised federal regulations to control emissions on oil and gas producers might ultimately set a higher price on emissions, but the conservative federal and provincial governments seem unlikely to do anything the industry would consider punitive.

Details of Harper’s offer to harmonize those rules with Washington’s emerging emissions regulations are not known. And although Canada and the United States have harmonized other regulations, such as those on automotive fuel efficiency, their energy sectors are so different that it is hard to see how to coordinate regulations. The United States, for example, has little in the way of tar sands production, and Canada burns relatively little coal in its electric power plants.

Both, however, are pursuing the elusive goal of capturing CO2 and storing it underground, so that could be an area of common effort.

Five years ago the Canadian government promised that any tar sands project built after 2012 would face new policies based on the use of carbon capture and storage, or CCS. “This policy was never adopted,” Environmental Defence said.

Some smaller projects in the Alberta portfolio are aimed at significantly reducing the exorbitant costs of carbon capture. One, for example, involving a research company called CO2 Solutions Inc., is exploring the use of carbonic anhydrase, an enzyme that during human breathing manages carbon dioxide. In an industrial scrubber, it may improve the efficiency of capturing the gas, perhaps making capture and storage economically feasible. This work is in the very early stages.

The Pembina Institute figures that for Alberta’s approach to work, it would have to require industry to cut carbon intensity by more than 40 percent, with a fine of at least $100 a ton for excess emissions.

For all the talk of mitigation, environmentalists say, the scale of the tar sands enterprise is simply too big, and the industry’s growth plans too ambitious, to fit within any program to offset emissions somewhere else.

“Mitigation of Canada’s increasing carbon pollution is incompatible with the Harper government’s policy of unchecked oil sands expansion, which is driving their push for Keystone XL,” said Mark Jaccard, an environmental economist at Simon Fraser University, at a news conference organized by environmental groups.

“Politicians are simply not telling the truth,” Jaccard said. “You can’t keep expanding the tar sands and meet the reduction target.” 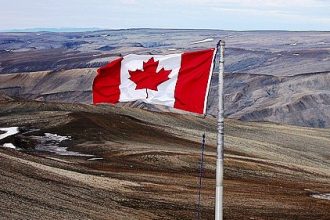 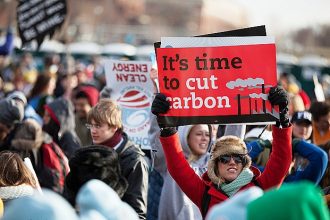