A Congressional investigation into the way states regulate the disposal of the often toxic waste generated during the fracking of oil and gas has expanded.

Rep. Matthew Cartwright, a Democrat from eastern Pennsylvania, launched the investigation in October by singling out his home state for the inquiry.

Now Cartwright, a member of the House Subcommittee on Economic Growth, Job Creation and Regulatory Affairs, has broadened the probe to include Ohio and West Virginia. Those states generate waste from hydraulic fracturing as well as accepting waste from other states, including Pennsylvania.

Cartwright’s growing inquiry mirrors the increasing national concern about the disposal of oil and gas waste left over from hydraulic fracturing, or fracking.

In letters to the heads of the environmental protection agencies for Ohio and West Virginia, Cartwright said fracking waste can “cause harm to human health and the environment” if not properly handled.

Consequently, Cartwright wants the two states to explain how their inspection procedures of oil and gas waste disposal facilities protect human health and the environment.

The representative also is seeking answers to more than a dozen other questions, including the number of inspections or investigations of disposal facilities receiving fracking waste. He also wants to know how the states’ regulators monitor the accuracy of reporting and compliance requirements for handling and disposing  of fracking waste.

“The Subcommittee minority is conducting this oversight to determine if state regulations and monitoring of fracking waste are sufficient to ensure accuracy, completeness and compliance with applicable environmental laws,” Cartwright said in the letters.

Fracking is the process of blasting a mixture of water, chemicals and sand down a well to break open shale to extract fossil fuels.

Among other concerns, Cartwright, who was recently elected to a second term, wants to determine whether Ohio and West Virginia are obeying the federal Clean Air Act, which mandates protection from airborne contaminants.

Cartwright cites a 2011 minority staff report of the House Energy and Commerce Committee. It identified 29 chemicals found in fracking waste that are possible human carcinogens, and are regulated under both the Clean Air Act and the Safe Drinking Water Act for their risks to human health.

The report identified benzene, toluene, xylene and ethylbenzene as being among the chemicals found in fracking products. Each of those compounds is a contaminant under the Safe Drinking Water Act and a hazardous air pollutant under the Clean Air Act. Benzene also is a known human carcinogen.

An investigation published earlier this month by InsideClimate News found that in most states where fracking is taking place, air emissions from oil and gas waste are among the least regulated, least monitored and least understood components in the extraction-and-production cycle.

WATCH this video, reported by InsideClimate News and the Center for Public Integrity, on how residents of the small town of Nordheim, Texas, are trying to stop construction of an oil and gas waste facility that would be almost as large as the town itself. 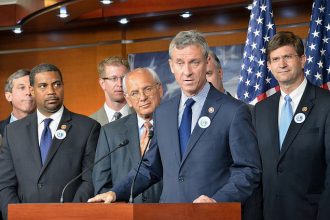