Once again this year, dissident ExxonMobil stockholders have filed several resolutions with the company asking it to be more forthright in addressing the climate crisis.

Submitted months before Exxon’s annual meeting in May, by a twist of fate it also helps set the stage for Wednesday, when  Rex Tillerson, Exxon’s former chief executive and Donald Trump’s pick to become secretary of state, appears at a Senate confirmation hearing.

At the hearing, Tillerson’s critics are likely to connect the dots between his stance on climate change as the head of the oil giant and how he would approach the problem as the nation’s top diplomat, in light of the global climate treaty that Trump has opposed.

And that may mean Tillerson finds himself facing questions about the treaty’s goals that shareholders have pressed him about before.

Most of the seven shareholder resolutions filed under Exxon’s deadline in recent days resemble those the company vehemently opposed in recent years under Tillerson’s leadership.

They ask Exxon to add a board member with environmental expertise; disclose funding of lobbyists and organizations dedicated to influencing climate policy; and to explain in detail how the company might align its business with a low-carbon economy.

Exxon is expected to oppose those resolutions, as it has consistently for more than two decades.

Dismissing one resolution last year, Tillerson told shareholders that confronting climate change had to be balanced against other objectives, like providing energy to the world’s poor. It’s an argument he has made repeatedly, and can be expected to be repeated in a new setting this week before the Senate Foreign Relations Committee.

“It is a judgment of balance between future climatic events which could prove to be catastrophic but are unknown … and the more immediate needs of humanity today,” Tillerson told shareholders last year.

Over the years, the dissident shareholders have carefully built a troika of recommendations that are meant to box in the company and make it acknowledge the conflicts between business-as-usual and the Paris agreement’s goals.

One resolution, offered last year and refiled in essentially the same form by New York State’s pension fund managers, calls for Exxon to prepare a stress test of how the company would perform if emissions were limited to keep warming below 2 degrees Celsius, a key Paris goal.

A second resolution, filed by Arjuna Capital, a company focused on sustainable investments on behalf of it clients, asks for a report summarizing how the company will adjust. “A transition toward a low carbon economy is occurring and trends to reduce global demand for carbon-based energy are accelerating,” it asserts. “A failure to plan for this transition may place investor capital at substantial risk.”

A third, also from Arjuna, asks the company to return capital to shareholders instead of investing in development of high-cost oil reserves that may never be exploited because of reduced demand for fossil fuels.

“In a perfect world we would see a scenario where the company admits the problem, communicates its options and then implement those options in transitioning its business models,”  said Natasha Lamb, Arjuna’s director of equity research and shareholder engagement.

At the shareholder meeting last year in Dallas, the open floor debate was dominated by arguments over the climate resolutions. Tillerson took the lead in urging votes against the resolutions.

Exxon’s opposition to the shareholder resolutions has put it in a position of dancing around the Paris treaty’s goal of keeping global warming to no more than 2 degrees Celsius above pre-industrial levels, and striving to limit warming to 1.5 degrees. Any warmer, scientists say, and the risks are intolerable.

However challenging the targets, there is a clear scientific consensus that achieving them means reducing net emissions of greenhouse gases to zero over the coming decades. But Exxon shies away from that conclusion.

“Even among members of the global scientific community, including leading climate change researchers and nonpartisan think tanks, there exists significant disagreement over how to define or reach a 2 degree target,” said a letter from an Exxon attorney to the Securities and Exchange Commission spelling out the company’s opposition to one resolution.

That attitude, some climate advocates worry, colors the worldview of the man nominated to represent the country’s climate policy.

“The key difference between his role as Exxon CEO and role of Secretary of State needs to be focused on what is the best interest of the United States and its people not just on the economic interests of a global energy company,” argued Shanna Cleveland, a senior manager at Ceres, a nonprofit that promotes sustainable investing.

Under Tillerson, Exxon continued to be one of the most obstructionist oil companies worldwide when considering climate change mitigation, said Richard Ferlauto, a member of the governing board of 50/50 Climate Project, a nonprofit focused on increasing the climate awareness of publicly traded corporations.

Opposition to shareholder climate resolutions exemplifies that resistance, said Ferlauto, who served four years as deputy director for the SEC’s office of Investor Education and Advocacy.

“While it’s conjecture to say how he’ll operate as Secretary of State, his track record is clear,” he said.  “ExxonMobil has been the focus of a high number shareholder resolutions relative to climate change. His opposition has been clear.”

“When the world sees that opposition, it will understand the U.S. policy going forward for what it is.”

Despite the perennial setbacks, dissident shareholders say they are not discouraged.

Several of the resolutions last year, although defeated, drew more support than ever.

Yes votes reached 38 percent for a resolution calling on Exxon to show how the company’s business would be affected by international efforts to limit global warming  to 2 degrees.

Slightly more than 60 percent of shareholders voting last year approved a resolution to allow stockholders to nominate outsiders for seats on the board, While not strictly a climate resolution, it meant a climate activist could eventually become a director. The proxy access measure was the first Exxon shareholder proposal to be approved since 2006.

That is a signal that a growing number of Exxon shareholders want the company to step up when it comes to climate change, said Tim Smith, senior vice president of Boston-based Walden Asset Management, which promotes corporate responsibility on behalf of shareholders.

Smith said there also is increasing concern about the  environmental and societal impacts of climate change.

“It is a very interesting combination,” Smith said.  “Investors are starting the conversation with different purposes, but end up at the same place: ‘We have to be concerned about what Exxon is doing about climate change.’ ”

Rev. Mike Crosby and the Province of St. Joseph of the Capuchin Order of friars once again are asking that Exxon seat a board member with a climate change background.

It’s the third time Crosby and the friars have tried this route.  Each of the last two years, the resolution has received a 21 percent favorable vote. But Crosby, who was among the first Exxon shareholders to pressure the company on climate change though resolutions back to the late 1990s, is unbowed.

The company that once ignored and discredited concerns over climate change has slowly become more receptive, he notes.

And Tillerson, for his part, goes before the Senate with his erstwhile employer, whatever its record of performance, acknowledging that the risks of climate change are real and that the Paris agreement is a good first step toward addressing them.

“I think this persistence has contributed to Exxon’s evolution,” Crosby  said. “They see it’s not going to go away.” 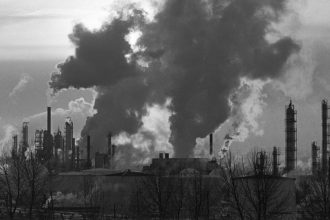