New York City is suing five of the largest oil companies over the billions of dollars it spends protecting the city from the effects of climate change, and it plans to divest its pension funds’ $5 billion in assets involving fossil fuel producers, Mayor Bill de Blasio announced Wednesday.

As head of the nation’s largest city, de Blasio is throwing significant weight behind a movement by local governments to directly target fossil fuel companies for the role their products play in fueling global warming.

“They are the first ones responsible for this crisis, and they should not get away with it anymore,” de Blasio said at a news conference held in a building that flooded when Hurricane Sandy hit the city in 2012. “It’s time for them to start paying for the damage they’ve done.”

With the divestment plan, the city’s pension funds are among the largest investors globally to announce their intention to sell their fossil fuel holdings. And by filing suit, too, New York is jumping into an international fight over who should pay the growing costs imposed by a warming climate.

The lawsuit, filed Tuesday in federal court, seeks damages from the five largest publicly-traded oil companies—BP, Chevron, ConocoPhillips, ExxonMobil and Royal Dutch Shell—to help pay for the city’s work adapting to climate change, including coastal protections and upgrading its sewer system. The suit requests a judgement determining the current and future costs incurred by the city and what portion the companies should pay for.

The complaint cites research showing the companies’ products have contributed more than 11 percent of all the greenhouse gas pollution since the Industrial Age began. It also says the companies “orchestrated a campaign of deception and denial regarding climate change” by funding efforts to discredit the science on climate change even though their scientists had warned them of the risks and the role of fossil fuels in causing it.

The lawsuit follows similar cases filed last year by seven coastal cities and counties in California, including San Francisco and Oakland, against the same companies, as well as a larger group of energy producers. The class-action law firm Hagens Berman Sobol Shapiro is part of the legal teams for New York and some of the California jurisdictions.

Michael Burger, executive director of the Sabin Center for Climate Change Law at Columbia University, said New York’s lawsuit could raise the pressure on the companies, if the case proceeds and inspires others.

“Any individual judgment is not going to be that big a deal,” Burger said. “But if you’re talking about cases being filed across 10 or 15 different states, and talking about forcing the industry to pay for adaptation costs across the country, it becomes a much different ball game.

Exxon Pushes Back on City Officials

De Blasio announced the suit flanked by several climate activists, including Bill McKibben, the co-founder of 350.org who has helped lead the divestment movement, and Naomi Ages, Greenpeace’s Climate Liability Project chief. Their inclusion could invite a charge from the defendants that they are being targeted in a game of politics.

On Monday, Exxon filed a petition in a Texas court seeking to defend itself from the California civil claims. It argued that it was the target of a “collection of special interests and opportunistic politicians” who are trying to score political points. The company is seeking to depose officials in the California jurisdictions to establish whether it can seek claims against the local governments for abuse of process and conspiracy.

Exxon has similarly charged that the attorneys general of New York and Massachusetts have conspired with activists in their investigation into whether the company misled investors about its climate risks.

Exxon published a blog post Wednesday saying that while it “welcomes any well-meaning and good faith attempt to address the risks of climate change,” it believes the lawsuits in California and New York “simply do not do that.”

The post added that the lawsuits seek billions of dollars from its shareholders. In moving to divest, New York would ensure it won’t be among those.

De Blasio and City Comptroller Scott Stringer announced a “goal” to sell the assets that its five pension funds hold in companies that own reserves of fossil fuels within five years. The first step will be seeking approval from the funds’ trustees—which the mayor and comptroller said they were confident they could secure—to begin an analysis of how to sell the securities “in a responsible way that is fully consistent with fiduciary obligations” of the funds.

At the new conference, both stressed that this would be in the funds’ financial interests, both because energy companies have been underperforming compared to market indices and because any substantial global action to limit climate change could prevent the companies from exploiting all of their oil and gas reserves.

McKibben, who has been watching the climate fight for more than 30 years, said: “This is one of a handful of the most important moments in that fight.”

Similar to the lawsuit, any individual divestment has only a limited impact, said Andrew Logan, director of the oil and gas program at Ceres, a nonprofit that promotes sustainable investment. “New York selling or not selling its shares isn’t necessarily going to keep the industry up at night,” he said. But if other cities or states follow New York’s lead, “that does have real risks for the industry.”

De Blasio said at the conference that he and other city officials are eager to work with their peers around the country to replicate their efforts. 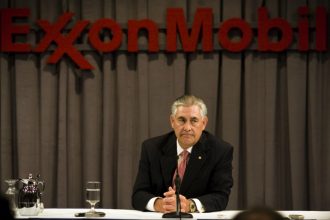 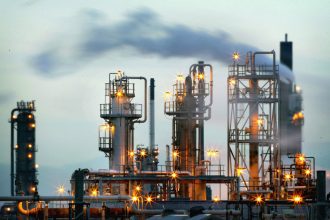 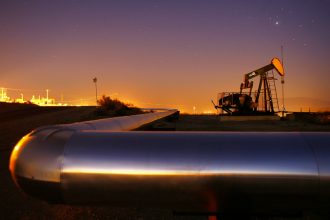