Coronavirus masks have become the latest symbol in the culture wars, with many liberals and conservatives in the United States taking opposing sides, much as they have in the fight over climate action.

For one side, masks represent an affront to liberty, signaling an overreaction to the pandemic that’s been led by state governments and public health experts, and fueled by ivory-tower elitists. President Donald Trump’s mask-less visit to a mask-making factory in Arizona—like the chat, sans mask, that Vice President Mike Pence, the coronavirus task force leader, had with a Covid-19 patient at the Mayo Clinic in April—resembles the administration’s tenacious denial of the climate crisis and refusal to address it.

Many mask wearers, on the other hand, view mingling mask-free in public places as both offensive and unhealthy, an affront to efforts to “flatten the curve” of Covid-19 cases in the United States, which as of Sunday totaled more than 1.3 million, with 79,000 deaths. For some who wear them, masks also signal support for science-informed decision making.

These beliefs tend to follow party lines. And they mirror the differing views of Democrats and Republicans on climate change—a connection revealed in polling and social science research about politics and power dynamics in society.

The Morning Consult, a nonpartisan digital media and survey research company, recently highlighted this connection in polling data that examined the ties between Covid-19-related safety practices of adults and their climate-change views. “Climate-concerned” respondents said they are worried about climate change and recognized the human role in causing it, while the “climate unconcerned” were those who noted they were “not too concerned” or “not concerned at all” about climate change.

The poll, based on responses of 2,200 adults in mid-April, found that 54 percent of the climate concerned said they “always” wore face masks in public spaces, while just 30 percent of those unconcerned about climate change said they did so—a difference of 24 points in a poll with a margin of error of 2.

The responses also illustrated the partisan response to lifting Covid-19 restrictions, with Republican-controlled states largely leading the push to reopen. Twenty-seven percent of Republicans said they are ready today to go out to eat or go on vacation, while just 10 percent of Democrats said they felt comfortable doing either.

A Failure of Empathy?

A new poll by the AP-NORC Center for Public Affairs Research further illustrates the political divide. About 76 percent of Democrats in the poll said they’re wearing masks when leaving home, compared with 59 percent of Republicans.

Aaron McCright, chairman of the sociology department at Michigan State University and affiliated with the school’s Environmental Science and Policy Program, said the similarities between attitudes toward global warming and the coronavirus have been on his mind as he’s watched mask resisters take on Michigan Gov. Gretchen Whitmer, a Democrat. When it comes to Covid-19 and climate change, “there are striking parallels,” McCright said.

He said it’s hard to overlook how protesters at the Michigan State Capitol are overwhelmingly white, male and politically conservative, echoing trends he tracked in his 2011 scientific paper, “Cool Dudes: The denial of climate change. among conservative white males in the United States.”

In that paper, McCright created a term, “the conservative white male effect” in considering climate denial. He found that conservative white males were 4 times as likely as women or non-whites to “not worry about global warming at all,” and about 7 times as likely to say the projected effects of global warming will never happen. Women and non-whites in that study reflected a lower tolerance for risk, presumably because they have less control over political and economic institutions.

McCright wondered aloud whether those who protested the stay-at-home order in Michigan, like the conservative white males in “Cool Dudes,” don’t identify with the people in the state who are getting sick and dying from Covid-19, just as they can’t relate to the risks posed by climate change.

“As long as Covid is disproportionately affecting people of color, people in a different part of the state as them, [the protesters] are much less concerned about it,” McCright said.

Perceptions about the coronavirus are also linked to race and gender in opinion research conducted in March by the Kaiser Family Foundation. For instance, women were significantly more likely than men to worry that they themselves, or someone in their families, might get sick. A higher percentage of women than men also reported taking coronavirus precautions, such as canceling plans to attend a large gathering and donning face coverings.

Among non-whites in the Kaiser poll, 64 percent said they were “very worried” or “somewhat worried” about being infected with Covid-19 or seeing someone in their family infected, compared with 47 percent of whites.

Coming Together on Staying Apart

What takeaway message might this Covid-climate relationship offer? If conservative leaders like Trump don’t embrace Covid-19 protection measures like mask-wearing, what does that mean for fighting the pandemic and for other looming catastrophes—like climate change—that are viewed through a political lens?

Louie Rivers, who studies the risk and decision making in marginalized communities at North Carolina State University’s Department of Forestry and Environmental Resources, has been discussing the coronavirus response with his wife, an epidemiologist.

He said that, despite partisan differences, the response to the pandemic has also been unified and selfless in important ways, a view supported by the Morning Consult poll. While in that survey, the climate concerned were 14 percent more likely to follow social distancing practices, the overwhelming majority (78 percent) still said they were following social distancing practices.

“To me, that’s hopeful,” Rivers said. “A lot of Americans, they’re losing their jobs, they’re having problems putting food on the table, and yet they’re staying at home and sharing the sacrifice.”

Rivers concluded that the response shows that Americans can sometimes find purpose in addressing a common challenge—in spite of the sharp divisions that seem to permeate all corners of American life.

His conclusion is a gentle reminder of something that’s become easy to overlook in the politically charged environment we find ourselves in. Complexity might be driving us to simplify life by categorizing everything, even people. But reducing our neighbors to caricatures makes it impossible to find common ground, even when we’re fighting a common enemy, whether a pandemic or the global hazard of climate change.

An earlier version of this article identified Aaron McCright as the chairman of Michigan State University’s Environmental Science and Policy Program. He is affiliated with the program but he is chairman of the university’s sociology department. 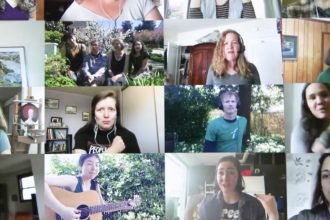 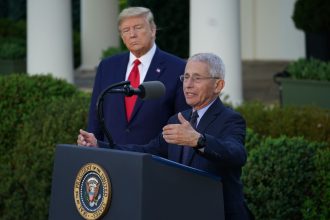 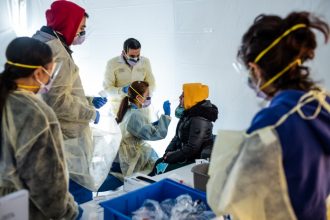