Canadian oil sands producers, facing a double whammy of low oil prices and higher taxes in Alberta, are slashing spending, suspending production, cutting jobs and halting shareholder dividends. They are fighting the same market forces that are putting pressure on the entire oil industry, but face even more hurdles than the oil majors.

Oil sands projects are among the industry’s most expensive endeavors, so they need sustained, higher oil prices. When prices are low—or even very volatile—companies risk spending billions of dollars to get oil that’s not profitable to sell. And oil prices have plunged by more than half since mid-2014. Friday’s close was $43.87 a barrel. Western Canada Select, the price marker for harder-to-produce bitumen from the tar sands, closed at $26.17, or $17.70 a barrel below the U.S. oil price.

Since prices crashed, oil companies have delayed or cancelled $200 billion in projects, and nearly 30 percent of those are in the oil sands, according to a recent Wood Mackenzie report. With prices still below the cost of many new oil sands projects, “the short-term outlook for new incremental investment in Canadian oil sands is bleak,” the report found.

“The industry is hoping that we’re in a temporary downturn in price,” said Andrew Logan, director of the oil program at Ceres, a Boston nonprofit that manages a coalition of institutional shareholders with investments in oil companies. “They should recognize that it’s not in their control, and they should plan accordingly. We think they should be hedging their bets and putting capital into non-carbon intensive-energy.”

Long-term, the oil sands producers face a tricky landscape. Climate activists oppose the expansion of their operations because extracting and burning tar sands oil sends even more greenhouse gases into the atmosphere than conventional oil. Opposition is also stalling the pipeline projects the industry needs to get its product to customers overseas and on the U.S. Gulf Coast. Pipeline projects headed east, west and south from Alberta have all hit snags.

The industry is still pushing for approval of the long-delayed northern segment of the Keystone XL pipeline, which would carry diluted bitumen from the Canadian border south into Nebraska, where it would connect to the completed Keystone XL section that ends in Texas.

The northern section of the Keystone XL has been stalled amid protests by landowners along the route, people worried about oil spills in waterways and others who believe the pipeline will worsen climate change by allowing companies to expand production of dirtier oil.  That portion of the pipeline awaits a final decision from President Barack Obama.

In addition, oil companies doing business in Alberta are bracing for a series of policy changes that could add new regulations and costs to their operations. The most recent election ushered in a new provincial government that has made reducing carbon emissions a higher priority.

Earlier this summer, the Alberta government raised the corporate tax rate to 12 percent from 10 percent, an action that Canadian Natural Resources and others said forced them to take large one-time charges that cut net income. The provincial government is also reviewing royalty rates and regulations on greenhouse gas emissions.

“Canadian Natural is built to withstand low commodity price cycles,” company President Steve Laut told investors Thursday. “We’ve been here many times before, and each and every time, we’ve come out of the cycle stronger and winning the cycle. I expect this cycle to be no different.”

But not everybody is so sure this is just an ordinary downturn.

The collapse in oil prices coincides with a historic push for a global pact to cut fossil fuel emissions to reduce the effects of climate change. Governments around the world are working toward sharply increasing clean energy use while slashing consumption of carbon-based fuels. This would undermine the oil industry’s projections for growing future demand.

The climate treaty being negotiated for global approval in December would limit emissions of the greenhouse gases that are warming the earth. There’s a growing realization that staving off the worst effects of climate change will probably require phasing out fossil fuel use almost entirely—and sooner than previously thought. Canada promised to slash its emissions in its pledge to the United Nations Framework Convention on Climate Change, but did not commit to curtailing expansion of the tar sands projects.

“What the long term looks like [for tar sands] really depends on whether we move to address climate change or whether we adopt failure,” said Anthony Swift, director of the Canada project at the Natural Resources Defense Council.  “That’s a dynamic that’s not on a lot of people’s radars, but it’s really at the heart of all of the questions around expansion in the tar sands.”

Last week, Canadian Natural Resources reported a second-quarter loss, cut its oil projects budget for the fourth time this year and warned of lower cash flow because of the tax increase. The company held its dividend steady and said it remains committed to expanding its massive Horizon oil sands project in Northern Alberta.

The stock prices of most of the Canadian oil and gas operators have fallen sharply over the past year. Among the larger companies, the declines have ranged from 10.5 percent to 32 percent this year.

Husky Energy, one of Canada’s most diversified oil companies, reported second-quarter earnings that were down 81 percent from the same quarter last year, largely because of one-time charges. The company has locked in savings this year of $575 million by cutting spending on new projects twice and laying off staff. It raised funds by selling debt and additional stock.

Cenovus Energy, Canada’s second-largest independent oil producer, saw net income fall 80 percent for the three month period that ended June 30. The company chopped its quarterly dividend by 40 percent and said it would increase planned job cuts to 1,100, more than 15 percent of its workforce. The company also said it would reduce spending an additional $280 million.

Suncor also bucked the trend and increased its dividend to 29 cents a share and announced plans to restart its share buyback program, which increases the value of remaining shares.

Like ExxonMobil and other major integrated oil companies, many of the Canadian oil companies benefited from strong earnings in their refining operations. Because the fuel-making business thrives on low oil prices, their income partially offset losses on oil production and sales.

Smaller, oil sands-only players such as MEG Energy are more vulnerable during a downturn because they don’t have the cash cushion of larger companies and don’t have refining operations to offset lost revenue from oil and gas sales. 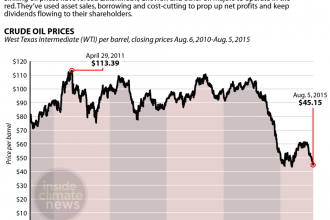