The thickening atmospheric stew of greenhouse gases is punching holes in Arctic sea ice, leading it to crumble at a rapidly increasing rate. Last spring, ponds of meltwater on the ice sped the melting of the glossy shield that reflects incoming heat from the sun back to space. By July, the ice had dwindled to a record low extent for that month.

It could disappear as soon as 2035, scientists said this week, as they released a study showing how the formation of melt ponds on the surface of the sea ice drove it to completely melt away about 130,000 years ago in an era called the Last Interglacial—probably the last time the Arctic Ocean was ice-free during summer.

Observations show melt ponds forming earlier and persisting longer. Their blue water is darker than the white ice surrounding them, so they absorb more warmth from the sun. That heat seeps through the sides of the pond to melt more ice, and even oozes down to warm the ocean beneath it. Instead of a solid reflective mirror, the surface is increasingly pitted, scarred and cracked until, at its edges, it dissolves into the sea like an ice cube melting on a hot sidewalk.

During the Last Interglacial period, that process accelerated in a vicious cycle of warming that ended up with the Arctic 6 to 8 degrees Fahrenheit warmer than it is today, said the study’s co-lead author Maria Vittoria Guarino, an Earth system modeler with the British Antarctic Survey. That much warming has huge implications for everything from ocean food systems to sea level rise around the world.

The imminent disappearance of Arctic sea ice has also raised concerns about the potential for international conflicts over the oil and gas deposits beneath the floors of Arctic seas, as well as over prized commercial fish stocks that have moved or are easier to reach due to the diminishing ice.

The loss of sea ice buffers is probably also speeding up the melting of land-based ice sheets and glaciers that flow into the ocean. Although it remains to be proven by researchers, it appears that this year’s sharp sea ice decline may have contributed to the collapse of Canada’s last ice shelf. And in a tweet this week, University of Liege climate scientist Xavier Fettweis attributed record runoff from the Franz Josef Ice Caps in the Russian Arctic to the collapse of Arctic sea ice.

“Usually, these ice caps have been protected by sea ice,” he said. The sea ice cools the air above it, maintaining freezing temperatures in the atmosphere above the ice caps. “This summer, the absence of sea ice allowed near-surface temperatures (around the Franz Josef Ice Caps) to be largely above 0°C (32 Fahrenheit),” he said. “Temperatures of 2-3°C (3.6 to 5.4 degrees Fahrenheit) above the freezing points were never reached over these ice caps until now.”

Knowing how and why the sea ice disappeared eons ago is key to predicting when it will happen again, and at the current pace of global warming, that time is coming soon, Guarino, of the British Antarctic Survey, said.

“The timing of sea ice disappearance is important because the faster this will happen, the less time we have to be ready for it and act upon it,” she said. “If sea ice is lost it could destabilize ice-shelves and cause land ice to melt, which would raise sea level.”

Guarino’s study didn’t look at the physical mechanisms of how the melt ponds affect sea ice. Rather, it was aimed at filling a puzzling gap in ancient climate records. There’s paleoclimatic evidence that the Arctic was extremely warm in the Last Interglacial period, but it’s not clear exactly why that was.

Feeding data about melt ponds into a new global climate model developed by the UK Hadley Climate Centre, the researchers eliminated other possible causes, like changes in the clouds and ocean currents in that ancient world, to conclude that the only way the region could have heated up so much was because all the sea ice disappeared, hastened by the formation of melt ponds. Spooling the climate forward in the model, they calculated that, at the current pace of greenhouse gas emissions, the Arctic Ocean could have ice-free summers by 2035.

Fuel on the Fire

National Snow and Ice Data Center climate scientist Walt Meier said he’s still cautious about pinpointing an exact year for when the Arctic will be completely ice free in summer.

“This paper is nice because it shows this effect occurred during the last interglacial, the last time the Arctic Ocean was likely ice-free and that melt pond formation played a key role,” he said.

“The only thing I would be hesitant about is the 2035 date for summer ice-free conditions. It is plausible, but it is a bit on the early side of most projections and there is a lot of uncertainty on the year, simply due to the natural variations in the climate,” he said. “It depends on whether there is a string of years with weather conditions favorable for ice loss or a string of years with somewhat less favorable conditions. I think there needs to be a plus-or-minus 10-year bracket around any year prediction to account for this variability.”

Co-author Julienne Stroeve, with the National Snow and Ice Data Center, said one of the major implications of the sea ice meltdown is the effect on weather and climate in the mid-latitudes of the Northern Hemisphere, where billions of people live.

“Changes in precipitation patterns affect human populations,” she said. That’s why it’s useful to find analogs for what happened in the past.”

Several studies in the last few years have showed different ways that the loss of sea ice can lead to more intense weather extremes like heat waves or extreme rainfall, by shifting winds that push storms from west to east around the Northern Hemisphere. The decline in the extent of sea ice is already shifting those patterns, and a complete loss could lead to even greater disruptions.

Stroeve said there are still some weaknesses in the modeling approach used by the research team she was a part of, including a troubling lack of data for winter changes to Arctic sea ice, which would show how the changes in different seasons interact with each other. The absence of that information makes her question the results a little bit, she said, adding that she’s skeptical of pure modeling studies that don’t include direct observations.

Getting more information about the spatial extent and trends in melt pond formation would be one of the keys to verifying projections of how that process influences the pace of sea ice decline, she said.

Meier said current observations show that the earlier start of melt pond formation and the overall melting season amplifies the loss of ice. With melt ponds now starting to form in June, they absorb the heat from the sun just when it’s most intense, around the summer solstice on June 21.

If the melt ponds form a month later, he said, the Arctic avoids absorbing a lot of solar energy that contributes to the melting. “You still get a lot, but you miss the peak,” he said. “In other words, early melt is like pouring gasoline on an early, small fire—it really accelerates the burning. Later melt, like in August, when the sun is already on its way down, is like pouring gasoline on a mostly burned-out fire. It might have some effect, but not much.” 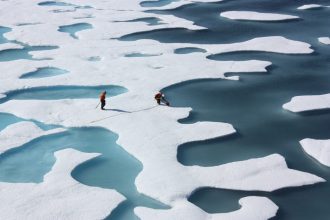 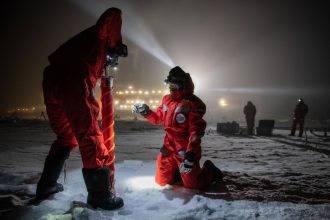 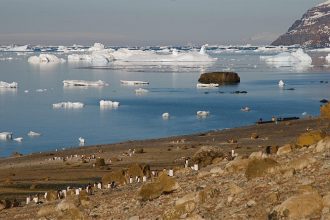 On a Melting Planet, More Precisely Tracking the Decline of Ice