In October 2011, when most politicians were doing everything they could to avoid speaking publicly about climate change, Sen. Sheldon Whitehouse gave a 23-minute speech on the Senate floor detailing the perils of carbon pollution.

“Virtually all of our most prestigious scientific and academic institutions have stated that climate change is happening and that human activities are the driving cause of this change,” said the Democrat from Rhode Island. By failing to act, he warned, the Senate was “earning the scorn and condemnation of history.”

Since then, Whitehouse has continued to address the issue, and over the past year has made a point of discussing climate change in weekly 20-minute speeches whenever the Senate is in session.

“We can, and we must leave a healthy environment and clean energy sources to our children and grandchildren,” he said in his Jan. 25 speech. “The missing piece is Congress. Congress is sleepwalking through history. It is time to wake up.”

Whitehouse, 57, is considered one of the most outspoken members of Congress on the need for climate action. He has voted against fast-tracking the Keystone XL pipeline and supports cap-and-trade policy. Last month, he and Rep. Henry Waxman (D-Calif.) established a bicameral climate change task force to encourage policy solutions.

But the weekly addresses, which are packed with scientific data and often made to an empty Senate chamber, put Whitehouse in a category all his own.

On November 15, he talked about Superstorm Sandy and the connection between climate change and extreme weather events. On Dec. 19, he praised a 350.org campaign urging universities to divest from the fossil fuel industry. He also regularly chastises climate skeptics for sowing doubt among the public.

“While the Congress of the United States has been distracted and deceived by these ploys, climate change marches on,” he said on Dec. 5. “The laws of chemistry and the laws of physics don’t care about the nonsense we’re up to in this building … Precious time is wasting. In the balance hang lives and jobs.”

Last week, Whitehouse talked with InsideClimate News about why he persists with the speeches—and about the reactions he gets from climate skeptics in Congress.

InsideClimate News: What prompted you to start making regular speeches on climate change?

Sen. Sheldon Whitehouse: I wanted to make sure that the problem of carbon pollution, and what it’s doing to our atmosphere and to our oceans, wasn’t being swept under the rug here in Washington. It’s an issue I think that the American people understand very well, but the special interests have a pretty tight grip on Washington and there was very, very little discussion about it. So I decided I would just make a point of doing this on a regular basis.

The other thing that I’ve done … fairly regularly, is organize groups of senators to come to the floor and talk about it in what we call colloquys [conversations]. I’ve had some very good ones with Al Franken, Bernie Sanders, Mark Udall, Barbara Boxer and others. So it’s part of an effort to keep this issue alive and current in Washington.

ICN: How did you get interested in climate change?

Whitehouse: My early interest had a lot to do with Sandra, my wife, who is a marine biologist … I remember one of the first wakeup calls I got was talking to one of her professors at the [University of Rhode Island’s] Graduate School of Oceanography. This had to be easily 20 years ago. He was talking about the warming of Narragansett Bay, and it was just a few degrees. So I scoffed and I said, “You know, I can’t tell the difference between 63 and 65 degrees when I jump in. That doesn’t sound like it’s a very big deal.” And he said, ‘Well, that’s because you don’t live in those waters … This is an ecosystem shift happening.”

And we’ve really seen that ecosystem shift happening. When Sandra was doing her graduate student research, she was studying the winter flounder in its infancy, in its larval stages, and how it interacts with a shrimp that is a predator of it. That was important research because the winter flounder was such an important cash crop for fishermen trawling in the bay.

When my wife was doing her research, it was one of the most important fisheries [in Rhode Island]. And now it’s virtually gone—it’s down I think nearly 90 percent, [and] it hasn’t been that long in between: 25 years …The water temperature in the bay is up 4 degrees, and it’s not hospitable to them any longer.

ICN: What are some other examples of how climate change affects Rhode Island?

Whitehouse: I found what Rhode Island potentially faced in the Sandy disaster very concerning and motivating. We were very lucky. For all the damage that Rhode Island did sustain, it could have been immensely worse.

ICN: Your speeches often cite breaking research on climate change. Where do you go for the science?

Whitehouse: We have a pretty good network that we’ve developed. We get pretty ready access to information and reports as they emerge. It’s often my staff who are doing the research and talking directly to the scientists rather than me personally…On the other side, we’ve got people in the scientific and environmental communities who know we’re interested in this, so they push stuff to us when they know it’s interesting.

ICN: How do you decide when to give the speeches?

Whitehouse: It’s not a set day and time of the week. A lot depends on what’s happening on the Senate floor. If there’s a bill being debated on the floor, we’ll either work our way into that debate, or work around it … We just try to get into the traffic.

ICN: How many people show up to your talks?

Whitehouse: Actually, very rarely are people in the room. One of the odd things about being a senator is you get used to giving speeches in a very lightly populated Senate chamber. But what you learn to appreciate is that even though there may be only a few colleagues in the room either waiting to speak or presiding or finishing up their remarks, the TV network [C-SPAN] is going to [broadcast it] to all the staffers who are watching and listening…on the monitors in their offices. So although you don’t actually see your audience in front of you, you have quite a big audience. And of course we try to push this out beyond the immediate senate community to the media and environmental community and the scientific community.

(Click here to see videos of his climate change speeches.)

ICN: Do you get feedback from other senators?

Whitehouse: Just the other day, the majority leader, Harry Reid, stopped me as I was going by and said, “Sheldon, I really appreciate the attention you’re bringing to climate change and carbon. You’re doing us all a real service by doing that.” I hear it regularly.

ICN: Have you been confronted by climate skeptics?

I think that my colleagues who are, shall we say, more attuned to the interests of the oil and coal industries, don’t particularly want to engage on this. They’re better off the less attention it gets … And I think the real extremists, the people who think this is a hoax, the hard overt climate deniers—have lost so much credibility that I expect Republicans don’t want them out on the floor saying anything.

And I think that’s consistent with their strategy, which is once they got through throwing doubt onto the question of whether climate change is real, with all those phony studies and accusations and things—once they clouded it up with a little bit of doubt, I think their strategy is just to retreat and try to make the issue as quiet as possible. So I see my job as to try to make noise about it at a time when they’re trying to be quiet.

ICN: So they’ve never argued with you?

Whitehouse: Nope. Never happened. Some time ago, Senator Inhofe from Oklahoma used to come to the floor and give climate denial speeches, but even he has dropped off now. So the only exchanges that I have with people are usually at the Environment and Public Works Committee hearings, when people go back and forth in their remarks before a hearing.

ICN: What are some specific actions that Congress could take to address climate change?

Whitehouse: I think the most obvious and important action would be to put a price on carbon so that it doesn’t get favored in the marketplace in a way that is unfair and, in the long run, harmful.

The only way the market really works is if the cost of a product is reflected in the price of the product. Unfortunately the carbon fuel industry has been living in a happy environment for them, in which the costs of carbon pollution that people have to suffer every day don’t have to be built into the price of their product. And that gives them an unfair advantage against clean energy alternatives.

I very much believe in market solutions and in letting the power of the marketplace work its will. It can’t work its will if the cost of the product isn’t in the price of the product. So I think trying to correct that is the most important thing we can do. And then the market begins to work, and innovation begins to take place, and people can make the right decisions and make the right investments.

Obviously those who are selling the carbon fuels enjoy having this market failure to their advantage, so they’re trying to protect it. But it’s wrong economically, it’s wrong environmentally, and ultimately it’s wrong morally. 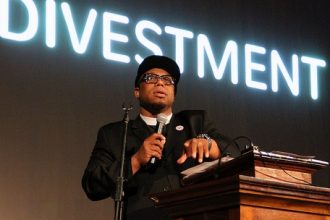