The fossil fuels that President Donald Trump so brashly promotes may seem like cheap energy sources, but they carry hidden costs that all of society is paying for—from damage caused by extreme weather and rising sea levels to the impacts of severe droughts on food and water security.

As Trump was preparing to pull the United States out of its international climate commitments, some of the world’s leading economists issued a report that puts a figure to the price on carbon needed to reduce emissions to rein in climate change and compensate for those external costs. It’s significantly higher than what most major economies have in place today.

The authors, led by former World Bank Chief Economists Nicholas Stern and Joseph Stiglitz, say carbon dioxide emissions will need to be priced at $40 to $80 per ton by 2020 to be high enough to change behaviors and shift investments away from high-emissions fossil fuels and toward cleaner energy. That rises to $50 to $100 per ton by 2030.

Even then, the report says, governments may need to pair a carbon price with other policies, such as efficiency standards, to lower emissions fast enough to keep global temperature rise well below 2 degrees Celsius, the goal of the Paris climate agreement.

“While the design of these packages will vary, based on national and local circumstances,” the economists argue, “a well-designed carbon-pricing system is an indispensable part of a strategy for reducing emissions in an efficient way.”

Carbon pricing can take a number of forms. In Canada, for example, several provinces have implemented taxes that result in higher gasoline and fossil fuel energy prices. The European Union, California, and several U.S. northeastern states have each implemented cap-and-trade systems that limit emissions from the utility sector and then allow companies to buy and sell carbon credits at a market rate.

A price on carbon—whether through a tax or cap-and-trade system—has long been economists’ preferred method for limiting emissions. Early this year, a group of prominent Republicans proposed a U.S. carbon tax.

The catch, of course, is what that price should be. The new report, written by a commission of 13 economists for the Carbon Pricing Leadership Coalition, a public-private partnership convened by the World Bank to promote a global price on carbon, highlights how far we have to go.

Only about 15 percent of the world’s greenhouse gas emissions are covered by some form of pricing, according to the World Bank, and the vast majority is priced below $10 per ton. In the European Union’s cap-and-trade system, the price of carbon has hovered below $6. In California, which has its own cap-and-trade market, the price is just under $14 per ton. The Regional Greenhouse Gas Initiative, which covers nine Northeastern states, recently saw its price for a ton of CO2 fall to around $3. The proposal by Republicans from earlier this year would start at $40 per ton, but would be paired with rolling back other regulations. Other countries have implemented much higher carbon prices for individual sectors of their economies.

“The report makes it very clear that there’s a significant gap,” said Stephane Hallegatte, a senior economist at the World Bank. “At the same time, there is also a trend with the fraction of emissions covered increasing rapidly in the last few years.”

Currently, at least 42 countries and 25 cities, states and provinces have some form of carbon pricing either implemented or scheduled to be implemented soon, according to the World Bank. Most have been added in only the past six years.

Last year, Canadian Prime Minister Justin Trudeau announced plans to implement a national carbon price that he said would help the country meet its targets under the Paris accord. The price would eventually rise to $37 by 2022.

Lawmakers in California this year introduced a bill that would implement a price floor for their existing cap-and-trade system beginning at $20 per ton in 2020 and rising thereafter.

China has been testing carbon pricing systems in eight  cities in preparation for a national system expected to launch this year.

Carbon pricing has faced resistance, too. Last year, voters in Washington State rejected a proposed carbon tax. The measure would have raised prices for gasoline and electricity generated by fossil fuels and would have returned the revenue from the tax to consumers and businesses through rebates to working families and cuts to sales and manufacturing taxes. But social justice groups opposed the measure, arguing that it would have disproportionately hit the state’s poor. Some environmental groups withheld support, too, disappointed that revenue wouldn’t be invested in clean energy.

The economic impact is one of the knottier details of how a carbon price is implemented, but the report argues that carbon pricing, if designed correctly, can provide an efficient way of cutting emissions while also generating revenue that can be devoted to fighting poverty and promoting economic growth.

British Columbia, for example, has a carbon tax that works out to about $22 at current exchange rates, and the government returns the revenue to businesses and residents through a variety of instruments, including a low-income rebate and a reduction in taxes for the lowest income brackets and for corporations. The tax, which was implemented in 2008, has been popular among voters. 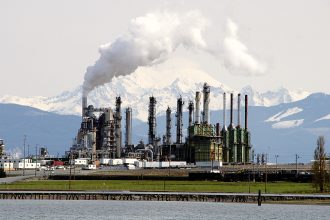