The Intergovernmental Panel on Climate Change missed a key opportunity to underscore the urgent need for rapid reductions in emissions of methane and other short-lived climate pollutants in the roll out of a seminal report on the science of climate change on Monday, climate experts say.

The report, the first installment of the IPCC’s Sixth Assessment Report, included the United Nations body’s starkest warnings yet on the increasing impacts of climate change, which are manifested in this summer’s floods, wildfires and heat waves.

But even if the IPCC missed an opportunity to underscore the need to quickly address methane, a White House climate advisor said reducing emissions of the gas is a top priority for the Biden Administration.

And an executive summary for policy makers of the nearly 4,000-page report noted that “strong, rapid and sustained reductions” in emissions of methane, the short-lived climate pollutant that has contributed the most to climate change, would “limit the warming effect.”

However, the 41-page summary otherwise focused almost exclusively on the impact that carbon dioxide has and will continue to have on the climate. The near-exclusive focus on carbon dioxide in the summary for policymakers stands in stark contrast to a recent United Nations report that concluded that methane reductions are the best, and perhaps the only, way to reduce global warming in the near-term.

“I’m disappointed that they left so much work to the policymakers to have to interpret,” Durwood Zaelke, president of the Institute for Governance and Sustainable Development, said. Zaelke served as a peer reviewer of the full IPCC report but did not review the summary for policymakers. “It’s going to be up to the scientists working for the government to be able to pull out the focus on methane and other short-lived climate pollutants.”

IPCC spokeswoman Katherine Leitzell said this week’s “Working Group I” report on the science of climate change was the first of three reports. More information on methane and other short-lived climate pollutants will be included in the third report, she said, which focuses on mitigating climate change and is due out early next year.

“The aspects related to methane are indeed limited, and focused on the climate system response to a set of five scenarios for greenhouse gas emissions,” Leitzell said.  “However, there is an entire chapter (Chapter 6) dedicated to SLCFs (short-lived climate forcers) and their influence on the climate system, for the first time in a WGI (Working Group I) report.”

‘Almost Immediate’ Benefit to the Climate Buried in IPCC Report

While Zaelke and others said they feared policymakers would not read beyond the 41-page summary, chapter 6 does provide greater detail on the benefits of methane reductions for those who delve that deep into the report. It notes that cuts in methane and other short-lived climate pollutants can reduce future warming by 0.2 degrees Celsius in 2040 and by 0.8 degrees Celsius by the end of the 21st century, “which is substantial in the context of the 2015 Paris Agreement,” the report stated.

The chapter also notes that methane and other short-lived climate pollutants released this year will have “at least as large” an impact on climate change over the next 10 to 20 years as current carbon dioxide emissions.

The extreme potency, combined with the limited time these pollutants stick around in the atmosphere, mean that efforts to reduce their emissions will have a significant and almost instantaneous climate impact. Conversely, there is a lag of 20 to 30 years before  the effects on the climate of reductions in carbon dioxide emissions are apparent. This is due in part to the long atmospheric lifetime of carbon dioxide; even if you stop emitting CO2 today, carbon dioxide that has already accumulated in the atmosphere will remain there for centuries.

The lag time is also caused by the release of sulfate aerosols, another short-term climate pollutant, or “forcer,” that is emitted alongside carbon dioxide when fossil fuels are burned. Unlike other short-lived climate pollutants, atmospheric sulfate leads to short-term cooling, partially masking the warming impact of carbon dioxide over the near-term.

“When you look at CO2, you see that cutting it even radically doesn’t produce any cooling for 20 to 30 years because, at the same time we are cutting CO2 by shifting to clean energy, we are also cutting the cooling sulfates that are co-emitted,” Zaelke said. “We can’t wait that number of years. We will lose control of the climate way before then.”

The delay in the climate cooling effect of cuts to carbon dioxide is driving a growing number of scientists who are concerned about the current rate of warming and worsening climate impacts to ring alarm bells over the need to also make rapid reductions in methane and other short-lived climate pollutants.

“Cutting methane emissions is the single fastest, most effective way there is to slow the rate of warming right now,” Ilissa Ocko, a climate scientist with the Environmental Defense Fund, said. “We care a lot about stabilizing our climate in the long-term, but because climate change is already now disrupting lives all over the world, we do need actions that limit both near- and long-term warming.”

Ocko said the current IPCC report and, in particular, the summary for policymakers, doesn’t make as strong a case for methane reductions as it should.

“It needs to be more clearly brought out of the conversation,” Ocko said. “When you read in between the lines and you look at all the figures you get all of this information, but you kind of have to tease it out for yourself and you have to know what you’re looking for.”

Other recent reports have put the need to focus on methane more plainly.

“Because of the limited time available, priorities must shift toward immediate and drastic reductions in dangerous short-lived greenhouse gases, especially methane,” a policy paper on the “climate emergency” published last month in the journal BioScience warned.

The focus on methane in the BioScience paper was based in part on a “global methane assessment” published by the United Nations in May.

“Reducing human-caused methane emissions is one of the most cost-effective strategies to rapidly reduce the rate of warming and contribute significantly to global efforts to limit temperature rise to 1.5°C (2.7 degrees Fahrenheit),” the report stated in the first line of its “Summary for Decision Makers.”

Drew Shindell, the lead author of the UN report and an earth science professor at Duke University, said the latest IPCC report went further in highlighting the need to address methane than prior versions. He added that the focus on carbon dioxide and longer-term warming are driven largely by the political framework to reduce emissions, including the Paris Agreement, which doesn’t include targets to slow near-term warming.

“It doesn’t say ‘Let’s try to keep the warming in the next 20 years as low as possible while also aiming for this goal,’” Shindell said of the Paris Agreement. “It just says let’s keep warming in the long-term below some target. It’s even been interpreted that that means it’s OK to pass that target and come back if there is no other way to meet, say, 1.5°C.”

Shindell said his one critique of the IPCC report is how it repeatedly described the benefits that can be derived from reductions in methane emissions in the context of offsetting the warming from declining sulfate aerosol emissions. He said there is no connection between efforts to reduce the two pollutants and linking them downplays potential gains from methane emission reductions.

“If you are trying to reduce methane emissions from the waste sector, or rice or cows, that has nothing to do with aerosols,” Shindell said. “Methane reductions give you a nice benefit, full stop.”

“Reductions in CO2 and other greenhouse gases are necessary to reach specific warming levels,” Naik said. “Additionally, methane reductions would have the added benefit of partially counteracting warming from declining aerosols that would occur because of air quality concerns.”

Duke, who is also co-chairman of the Climate and Clean Air Coalition, a UN-led organization that, along with the UN Environment Program, published the recent UN Methane Assessment, said, “The U.S. is pushing hard to keep a safer 1.5 degrees Celsius future within reach, including centrally by cutting methane both at home and abroad.”

He added, “There is an in-depth interagency, whole of government approach that is under development in which we’ll be moving ahead this year.” While Duke provided few specifics, he said the administration would focus first on reducing methane emissions from the oil and gas sector, which, globally, account for one quarter of methane emissions.

Duke said one “downpayment” on this effort has been working with Congress to secure funding for plugging abandoned oil and gas wells. A long anticipated infrastructure bill, passed by the Senate on Tuesday, included $21 billion to clean up brownfield and Superfund sites, abandoned mines and old oil and gas wells that need to be plugged.

Duke said setting carbon intensity standards that measure and limit emissions at individual facilities across the oil and gas sector would play a key role in reducing the industry’s methane emissions and could also be applied to methane emissions from landfills and agriculture.

“It is also a critical environmental justice opportunity and a critical way to save hundreds of thousands of lives by reducing tropospheric ozone, since methane is a key precursor to that problem,” he said. 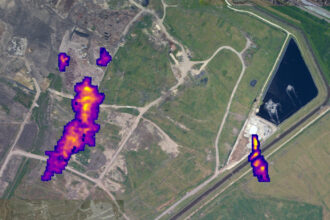