BALTIMORE, Maryland—Sheep and goats gnaw the remains of jack-o’-lanterns as the second Halloween of the pandemic era recedes. Rain or shine—on this day it is rain—Marvin Hayes works in the Filbert Street Community Garden, “the Wakanda of South Baltimore,” as he likes to call it. It’s a sanctuary in the neighborhood of Curtis Bay, unmistakable for its multicolored murals, overgrown chain link fence and the sounds of barnyard animals. On this Tuesday afternoon, he greets a pair of veterinarians who’ve come to treat one of the newest members of his family, a Nigerian Dwarf goat named Pepper Jack.

A little over a decade ago, the one-acre plot was a vacant lot where locals dumped their trash. Originally, the garden was intended to fight food scarcity in the area, but its role has grown considerably since then, and now includes supporting urban wildlife and youth education. It also houses the Baltimore Compost Collective, an operation that Hayes began in 2015.

The collective’s mission is to combat local food waste by charging customers a modest fee to pick up buckets of food scraps from their homes. But it’s also involved in the broader fight for environmental justice, one that includes efforts to clean the city’s air by shutting down local trash incinerators, reducing the amount of waste that is burned and landfilled and bringing to light the many environmental hazards in South Baltimore, such as massive coal piles, a shipyard, freight trains and constant diesel-fueled traffic.

The Baltimore Compost Collective is a small-scale operation that Hayes hopes will serve as a test site and inspiration for larger, city-operated composting programs in the future. It currently handles 600 to 700 pounds of food scraps per week, and donations are increasing, quickly approaching the 800-pound capacity of their compost bins.

“A lot of pumpkins and organic waste get burned and buried, and we don’t have to do that. We can turn it into a beautiful black gold humus and feed people,” Hayes said.

“Black gold”—which Hayes speaks of with an almost mystic regard—is the end result of the four-month composting process. It’s used in the garden to help grow the bounty of crops found throughout the 47 raised beds used by locals, like green tomatoes, peppers and eggplants. Planters often send Hayes photos of their engorged fruits and vegetables in wonderment about the effects of his black gold.

Running the collective is more work than Hayes can handle on his own. Because of the dearth of work opportunities for teenagers in Baltimore, he employs students from nearby Benjamin Franklin High School.

Kenneth Moss, 18, is a recent graduate and the only part-time worker at the collective right now. Three years ago, he attended a workshop led by Hayes. Within an hour of it ending, Moss had sent Hayes a resume and cover letter applying for work at the collective. Whenever Hayes speaks of Moss, which is often, he beams like a proud papa.

“The same way that the compost comes in and you put it through a process, we put our youth through a process. So then they’re empowered to be employed or even start their own business,” Hayes said.

Over the last three years, Moss has done just that by doing photography on the side.

“I want to, hopefully, at 21 try to get to National Geographic,” Moss said.

But even for those who don’t make it through Hayes’s interview process, he still tries to help them achieve job readiness for the future.

“A lot of them don’t come with birth certificates, social security cards. They don’t know how to do a cover letter or resume. So we work with them,” he said.

If Hayes raises enough money to buy another van, he will be able to bring on more workers to serve a larger area. Doing so would further the city’s ambition to divert 90 percent of its waste away from its incinerator and landfill by 2040.

Hayes, as he puts it, wants the collective to be the “compost caboose to push the city toward zero-waste.”

But the collective, the city and all of those involved in this effort have their work cut out for them: A recent report found that only 0.7 percent of city waste is composted, while 7.6 percent is recycled and 91.7 percent is landfilled or incinerated.

If waste were to be cut down significantly, there would be implications for pollution levels as well: lessening or eliminating emissions from Wheelabrator, a towering waste incinerator; reducing garbage truck transport and therefore diesel exhaust; and decreasing methane emissions from landfills.

Respiratory problems are rampant in Baltimore compared with the rest of the state and country. Hayes recalls visiting a classroom where nearly every student had asthma and the teacher had to keep plenty of inhalers on hand.

“The wind doesn’t segregate or discriminate, so we’re all breathing in bad air,” Hayes said.

Last year, Hayes, along with many other demonstrators, took part in a “die-in” at Wheelabrator, in which they lay on the ground in mock death. If Hayes had his way, he would transform Wheelabrator—sometimes referred to as a cloud-maker or the city’s welcome sign—into a composting or recycling facility.

But until such an opportunity arises, if ever, he’s committed to winning far smaller battles by spreading “compost fever.” One such win was to help convince the city’s Department of Public Works to create a pilot program for food waste drop-off locations.

“He has a very contagious energy,” said Anne Rosenthal, a food systems specialist with the Baltimore City Public School system, whose work sometimes overlaps with Hayes’s. In the past, Hayes has given workshops on composting and food waste at Great Kids Farms, a 33-acre piece of land owned by the school system where Rosenthal spends much of her time working.

“We’re trying not to perpetuate the stereotype of farms and green spaces as exotic, suburban white spaces,” said Rosenthal. “So it’s really great to have spaces like Filbert Street that are next door to, you know, where our students live and offer a really wonderful place for them to spend time and learn.”

Hayes is very fond of a quote from the movie Black Panther, spoken by the main character, T’Challa: “In times of crisis, the wise build bridges while the foolish build barriers.”

“This,” Hayes said about the garden, “is the bridge for South Baltimore.” 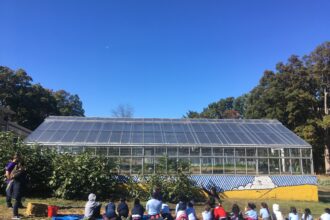 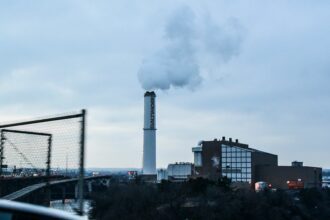