Republicans in the House of Representatives quietly passed 13 provisions last week that would choke off Energy Department financing for existing clean energy and efficiency programs.

The House adopted the amendments on June 6 as part of its 2013 Energy and Water Appropriations Bill. The proposed cuts reflect a broader trend. As the Tea Party reshapes the GOP, opposition to policies that reduce climate-changing gases and stoke the clean energy economy is soaring.

More than half of the targeted DOE programs were started under Pres. George W. Bush, while some go back decades. They range from wind technology supports to mandates for zero-carbon buildings, LED light bulbs and electric golf carts (and, of course, the controversial program behind the Solyndra loan).

Overall, the House energy bill would give $32.1 billion to energy and water programs, a cut of about $1 billion from Obama’s budget request. It would also shift more dollars to fossil-fuel programs. Research and development of “clean” coal, oil and natural gas technologies, for instance, would get a 60 percent boost from last year’s level to $554 million.

The Democratic-led Senate hasn’t passed its energy spending bill yet, but it’s unlikely to include the same “ideological” amendments, said Jim DiPeso, policy director for ConservAmerica, a nonprofit formerly called Republicans for the Environment. “The House and Senate just don’t see eye-to-eye on a lot of things.”

Still, the chambers must hash out a compromise before the 2012 budget expires on Sept. 30, and some riders may survive, though they could be largely symbolic. Manufacturers are already introducing energy-efficient goods, DiPeso said, and the loan program can’t back any new Solyndras; it expired last year.

Joshua Freed, vice president for clean energy at Third Way, a moderate think tank, offered a more sobering view: The provisions send “a very bad signal that [the private sector] can’t count on the government to set consistent policy … and that there is outright hostility among some on the Republican side toward” the clean economy.

The 13 amendments target the following programs:

1. National initiative to boost wind power. Created back in 1999 by the DOE’s Office of Energy Efficiency and Renewable Energy (EERE), the Wind Powering America initiative provides funding and technical support for R&D and deployment of wind technologies. Its goal is to get at least 5 percent of U.S. power from turbines by 2020. (The country’s at about 3 percent today.) The amendment would cut off all funding for the program. Sponsor: Rep. Jeff Flake (R-Ariz.)

2. Federal rule for zero-carbon buildings. Section 433 of the Energy Independence and Security Act of 2007, a sweeping energy policy signed by Bush, requires all new and renovated federal buildings to zero out fossil-fuel use by 2030. In 2010, the DOE proposed rules to implement the Fossil Fuel-Generated Energy Consumption Reduction mandate. The House amendment, backed by the natural gas industry, would bar the DOE from spending money to wrap up the rulemaking process. Sponsor: Rep. Rodney Alexander (R-La.)

3. Federal ban on high-carbon fuels. Section 526 of the Bush-era energy act stipulates that the Department of Defense and other federal agencies can’t buy fuel from high-carbon sources like oil sands, oil shale or coal-to-liquids. This measure would ban the DOE from enforcing the rule. Sponsor: Rep. Bill Flores (R-Texas)

4. U.S. clean energy initiatives in other countries. The EERE’s international program partners with global leaders and organizations to develop renewable energy and efficiency measures mainly in poorer countries. This amendment cuts off funds for the program, and it cites Obama’s plan to spend $600,000 to help China and India build sustainable cities as the leading reason. Sponsor: Rep. Andy Harris (R-Md.)

One of its recipients was solar panel maker Solyndra, which got $528 million before going bankrupt last summer, in a scandal that Republicans have used to hammer Obama. Going back to 2005, the entire DOE loan program has given more than $35 billion to nearly 40 projects, which the agency says has helped to create some 62,000 jobs.

This amendment would prohibit the DOE from spending any of its Title 17 funding on projects that would qualify for Section 1705 awards, a purely symbolic provision given that the 1705 program expired eight months ago. Sponsor: Rep Jim Jordan (R-Ohio)

“This is the no-more-Solyndras amendment,” Jordan said at last week’s House meeting.

7. Rules for paying back loan guarantees. The 2005 Energy Policy Act says that the DOE can’t “subordinate” any loan obligation—meaning, if a loan winner goes belly-up and the government has to cover its losses, then the DOE must be first in line to get paid back.

But in the case of Solyndra, that isn’t what happened. The DOE agreed to let private investors collect $75 million from Solyndra first. The House amendment charges that the DOE violated the 2005 act by doing that, and it would prohibit the agency from subordinating again on existing loan guarantees. Sponsor: Rep. Cliff Stearns (R-Fla.)

Tea Party conservatives and libertarians have cast the light-bulb rules as an invasion of personal liberties. This provision would prohibit the DOE from spending money to enforce the rules in the 2013 fiscal year. Congress passed a similar measure last year that blocks the law in the current fiscal year. Sponsor: Rep. Michael Burgess (R-Texas)

9. Nearly 40-year-old efficiency requirement for DOE grant winners. Section 325 of the Energy Policy and Conservation Act, passed in 1975 by Gerald Ford, requires that winners of any DOE grant of more than $1 million must meet federal efficiency standards for lighting. That means universities, nonprofits and businesses that have won grants and have inefficient lighting at their facilities have to pony up for upgrades. The amendment would strike this requirement. Sponsor: Rep. Chip Cravaack (R-Minn.)

10. Energy-efficiency rules for showerheads. Twenty years ago, Congress passed a measure that stipulates that showerheads can’t release more than 2.5 gallons of water per minute. This provision would bar the DOE from enforcing that efficiency rule, despite being the norm for showerhead manufacturing. Sponsor: David Schweikert (R-Ariz.)

11. Energy-saving standards for battery chargers. In March, the DOE proposed new energy-efficiency standards for battery chargers for consumer products like laptops, cell phones and digital cameras. This amendment would prevent the agency from requiring energy-efficient chargers for electric golf carts. The rule would still apply to the other products. Sponsor: Rep. Jeff Fortenberry (R-Neb.)

12. Expense payouts by DOE’s Advanced Research Projects Agency-Energy (ARPA-E). In the past, ARPA-E, a DOE department dedicated to creating technology breakthroughs, has reimbursed its grant recipients for expenses, including advertising for their products or meeting with bankers to raise capital. An August 2011 audit report by the DOE’s Inspector General disagreed with this practice, saying that the agency shouldn’t help grant winners promote themselves. This amendment would block ARPA-E from covering such costs. Sponsor: Rep. Mo Brooks (R-Ala.)

13. DOE-backed media campaign to tout green technologies. Section 801 of the 2007 energy law directs the DOE to run a 10-year national media campaign to promote energy efficiency for homes and businesses and curbing America’s appetite for fossil fuels. The act authorized Congress to spend up to $5 million a year for five years to run the campaign. This provision would ban Congress from approving the expenditure. (To date, the DOE has neither launched such a media campaign nor requested funds for it.) Sponsor: Rep. Jeff Landry (R-La.)

The House energy bill did include two pro-clean energy amendments, both from Democrats:

1. Obama’s clean-car rules for federal fleets. In May 2011, Obama announced that by 2015 all light-duty vehicles that federal agencies buy or lease must be alternative-fuel vehicles, including hybrid or electric cars or ones that run on compressed natural gas or biofuels. This amendment would require compliance with the president’s memorandum. Sponsor: Rep. Eliot Engel (D-N.Y.).

2. Federal contracts for energy-saving retrofits. The National Energy Conservation Policy Act, first made law in 1978 and regularly updated, requires that federal buildings must reduce their energy intensity by 30 percent in 2015, compared to 2003 levels. To help meet that mandate, federal agencies are required to conduct energy audits to see where efficiency upgrades are needed most. This amendment would allow the DOE to use funds from the budget to perform such audits. Sponsor: Rep. Peter Welch (D-Vt.)

“The point of this amendment is to have [federal agencies] that have already been directed to do the energy audit to get on with it,” Welch told the House. 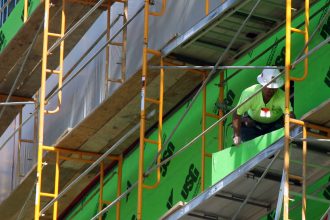 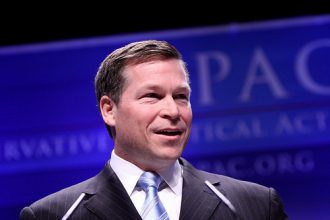