The export war between Western coal-producing states that want their coal to reach new markets and Pacific Coast states that don’t want the pollution or climate consequences of shipping it played out in a federal appeals court on Tuesday.

This time, the fight was over land near the Port of Oakland, California.

Lawyers for Oakland Bulk and Oversized Terminal LLC, which wants to build a coal terminal near the port, accused the City of Oakland of breaching a development contract by banning coal shipments after the agreement was signed. The city’s attorneys contend that handling coal at the city-owned land was not part of the original plan and would expose Oakland’s residents, particularly disadvantaged communities, to health-harming pollution.

Their fight represents a deeper rift between land-locked fossil fuel-producing states and coastal states over climate policies and commerce.

Similar to Oakland, coal-shipping projects also have run aground at the Millennium Bulk Terminal in Longview, Washington; the Gateway Pacific Terminal in Bellingham, Washington; and the Port of Morrow in Boardman, Oregon, each because of state and local pollution concerns, including climate change.

The Trump administration entered the fray last April, issuing an executive order aimed at streamlining permitting for ports, pipelines and other energy infrastructure. “By promoting the development of new energy infrastructure,” it says, “the United States will make energy more affordable, while safeguarding the environment and advancing our Nation’s economic and geopolitical advantages.”

The coal-shipment logjam is also targeted in legislation sponsored by U.S. Sen. John Barrasso (R-Wyo.) intended to speed up state and tribal reviews under the Clean Water Act.

The coal states argue that they lose billions in potential revenue if they don’t have access to coastal coal terminals.

In the Millennium Bulk Terminal case in Washington state, one expert report calculated that the lost economic opportunity without that port would mean roughly $18 billion in gross domestic product over two decades and 3,900 direct, indirect and related jobs for Wyoming, Montana, Colorado and Utah. A Washington state appeals court ruled against the company in that case in August.

Utah legislators have set aside $53 million—originally intended for new community centers, roads and other projects to mitigate mining’s impact—to help pay for the Oakland terminal. Utah Republican Gov. Gary Herbert has also signed an agreement with the Mexican State of Baja California to expand the infrastructure needed to ship coal through the Port of Ensenada.

Questions of Fairness and ‘Sandbagging’

In the San Francisco courtroom on Tuesday, the three appeals court justices questioned both sides about the contract and the decision-making that led to the coal ban.

The city was joined by the environmental groups Sierra Club and San Francisco Baykeeper. They asked the court to overturn a May 2018 U.S. District Court ruling in favor of the company. That court said the city had breached the development contract by banning coal without proving that handling it near the port posed a health and safety risks to the community.

Stacey M. Leyton, arguing for the city, pointed out that the city council relied on reports showing coal dust would drift into neighborhoods, particulate pollution would exceed air-quality standards, and that there was a risk of a coal fire. She said Oakland Bulk and Oversized Terminal LLC had every opportunity to raise objections during the public reviews after the ban was proposed but that the company instead waited to raise its objections in court.

Robert P. Feldman, attorney for the company, said the district court ruling in its favor should stand because the company hadn’t been treated fairly and the city breached the contract.

“This was not a fair process. It was never intended to be a fair process,” Feldman told the three justices. “The idea that we sandbagged is 100 percent incorrect.”

“It looks like it, though,” responded Justice Lawrence L. Piersol.

‘Gateway to the International Market for Us’

Back in Carbon County, Utah, former commissioner and coal terminal advocate Jae Potter said he was excited to see the case progress and is hopeful that the district court’s check on the coastal cities’ environmental concerns will stand.

“It’s a big deal, really big deal,” he said. “It’s the gateway to the international market for us.”

“Coal is a toxic fossil fuel that harms wildlife and people, and burning coal continues to worsen the planet’s climate crisis,” said Sejal Choksi-Chugh, San Francisco Baykeeper’s executive director. “That’s why we were in court today, to stand up to the polluting coal industry and say we’ve had enough. For the good of the bay, our communities and our planet, let’s keep coal in the ground.”

Editor’s note: This story has been updated to correct that the land is near the Port of Oakland. 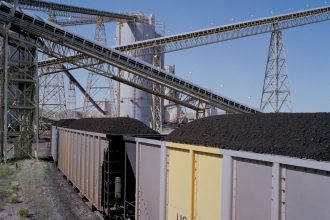 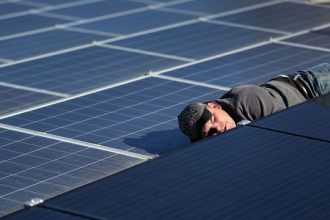 Coal Is On Its Way Out in Indiana. But What Replaces It and Who Will Own It?