The Des Moines city council voted 7-0 on Monday in favor of a resolution that sets a goal of reaching 24/7 carbon-free electricity by 2035, making it probably the first city in the United States, and maybe the first in the world, to pass a plan that emphasizes a target of relying solely on clean energy around-the-clock.

The goal will require a combination carbon-free sources, and ditching fossil fuels altogether.

Des Moines Mayor Frank Cownie said the measure is a response to the rising urgency of climate change.

“We have seen time and time again how local governments have the burden of dealing with extreme and more frequent events caused by weather and climate change,” he said, prior to the city council’s vote on Monday. “We need to play a bigger role in sustainability, mitigation and adaptation.”

One of the leading supporters of the resolution was Josh Mandelbaum, a city council member who also is an attorney for the Environmental Law & Policy Center. He said Des Moines took inspiration from Google’s plan, announced last year, to get to 24/7 carbon-free energy by 2030.

Google’s plan is notable for the way it seeks to completely excise fossil fuels from the mix. The company is doing a rigorous accounting of fossil fuel use and then aims to figure out how to replace the functions carried out by those fuels with other energy sources, one by one. For example, Google is looking at using battery systems to provide backup power at data centers, replacing diesel generators.

Google is big enough that its policy can give a strong nudge to the utilities that will need to help if the company is to remain connected to the grid.

Des Moines also has the advantage of being big enough to influence its utility, MidAmerican Energy, which is part of Berkshire Hathaway Energy. The city, with a population of about 210,000, is the largest in MidAmerican’s service territory.

MidAmerican has said it has a “vision” of getting to carbon-free electricity, but it is one of a dwindling number of utilities in the country that have not made a firm commitment on a timeline to reach that goal.

In the months leading up to the Des Moines vote, MidAmerican had raised concerns that the policy would be difficult to implement and lead to an increase in utility bills. Those concerns were among the reasons that city officials revised their resolution to set a target date of 2035 instead of 2030.

Geoff Greenwood, a MidAmerican spokesman, noted the company’s track record as a developer of renewable energy and said it is committed to working with the city of Des Moines on the clean energy plan. Indeed, MidAmerican has been a key player in making Iowa one of the country’s leading producers of wind energy.

Asked about the potential costs of the Des Moines plan, he said getting to 24/7 carbon-free electricity will require new investments in technology, with costs that are not yet known.

“We welcome the challenges ahead of us, in partnership with the city of Des Moines, to deliver reliable, renewable and affordable energy,” Greenwood said.

Mandelbaum said MidAmerican’s system needs to be “completely clean” of fossil fuels by 2035 for Des Moines to reach its goal.

But that’s just part of what promises to be a complicated process. The city and others will need to build more renewable energy and make large investments in battery storage, among other steps.

For now, though, city officials said they are going to take a moment to enjoy the unanimous support they received for an ambitious plan.

“It’s absolutely worth celebrating, but then it’s back to work,” Mandelbaum said.

How Does Des Moines’ Action Compare to What Others Are Doing?

I’m being careful when describing what Des Moines has done and how it compares to others. That’s because cities are changing the way they talk about their approaches to cutting emissions, and some cities may be using different words to describe similar things.

For example, Hanna Breetz, a sustainability professor at Arizona State University, noted that Aspen, Colorado, and Kodiak, Alaska, already generate 100 percent of their electricity, or close to it, from renewable sources, and have renewable resources that are available to meet their needs around the clock.

But those cities don’t talk about the 24/7 nature of their energy systems because “up until recently that wasn’t a thing, it wasn’t a framing that was salient,” she said.

“What I think we’re seeing is an evolution of the discourse,” Breetz said. That evolution goes back just a few years, to the late-2010s, when cities were announcing goals of reaching 100 percent clean energy, but those plans were often light on details, she said. (Sierra Club and the Natural Resources Defense Council each have lists of cities that have announced clean energy plans.)

As the plans became more common, and as many corporations came forward with their own plans, researchers and environmental advocacy groups began to ask for more details and called attention to how some of the corporate plans were misleading.

Then, last year, big tech companies like Microsoft, Apple and Google came forward with a new wave of clean energy plans that were incredibly detailed.

In this atmosphere of heightened ambition, Google was the one that helped to establish the idea that a 24/7 plan is a next step that is more rigorous and specific than what many others are doing.

Breetz said Des Moines is the first city she knows of that is framing its policy as 24/7. Also, Des Moines is much bigger than Aspen and Kodiak, and can serve as an inspiration to other cities of its size.

“It’ll be interesting to see how much this catches on among cities,” she said.

Coal-Fired Power Is Heading for the Exit in Minnesota

The era of coal-fired electricity now has an expiration date in Minnesota.

The utility Minnesota Power said this week that it will stop burning coal at the Clay Boswell Energy Center by 2035, part of a larger plan to aim for net-zero emissions by 2050.

With the changes at the Boswell plant, plus the closings before that of two Xcel Energy coal-fired power plants, the state will have zero coal-fired plants operated by investor-owned utilities.

“For Minnesota Power, this plan is about more than achieving the most significant sustainability goal in our long history—it is about becoming 100 percent carbon-free the right way,” said Bethany Owen, the president and CEO of Allete, Minnesota Power’s parent company.

She said the company will implement its plan in a way that maintains reliable electricity and is mindful of the needs of employees and residents of communities that host power plants.

The company said it will close Unit 3 of the Boswell plant, with a capacity of 335 megawatts, in 2030.

That will leave Unit 4, which has capacity of 468 megawatts. Minnesota Power said it will convert this to run on a different fuel, but did not specify the fuel.

Other utilities have switched from coal to natural gas at some power plants. Minnesota Power could do this or choose to burn some type of biomass, like wood pellets. Or the company could consider alternatives that are not available today, like hydrogen. National policy may play a role, considering that the incoming Biden administration has said it wants the country to move away from fossil fuels in the electricity system by 2035.

Minnesota Power also is adding about 400 megawatts of new wind and solar energy to its resources. The utility is aiming to cut emissions 80 percent from 2005 levels by 2035, and then to get to net-zero by 2050.

Minnesota has relied heavily on coal, which was the fuel for the majority of the state’s electricity as recently as 2011.

As coal has declined, Minnesota utilities have filled the gap with electricity from natural gas power plants and wind farms. The state has some of the strongest wind resources in the country.

Allen Gleckner, lead director of clean electricity at the advocacy group Fresh Energy, praised Minnesota Power’s plan as “a huge step forward” that makes clear that “a carbon-free electricity system is the destination.”

He and others will have a chance to closely scrutinize the plan during the next step of the process, which is a review by state regulators. 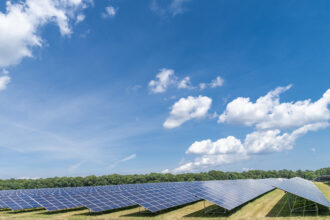 Inside Clean Energy: The Solar Boom Arrives in Ohio