New Jersey Gov. Chris Christie’s recent veto of a bill that would have banned the treatment, storage and disposal of fracking waste in the state thrusts the Republican presidential contender and head of the Republican Governors Association into the national debate over fracking, the controversial practice that blasts chemicals, sand and water into a well to crack open bedrock and extract fossil fuels. Christie said the bill was unconstitutional.

The anti-fracking bill had passed New Jersey’s Senate and Assembly with more than 80 percent support in the spring. It’s unclear if legislators will take the rare step of overriding the veto—a move supported by green groups that say this isn’t the first time the governor has favored the oil and gas industry over the environment.

In 2011, Christie pulled the state out of a regional carbon-trading system. A state court later ruled that the governor’s method was illegal; environmentalists are now trying to reinstate New Jersey in the system. Earlier this year, Christie also strongly urged the approval of an unpopular natural gas pipeline in Pinelands Forest. The project eventually failed to win approval of the Pinelands Commission, the group overseeing the protected forest.

With the trading system, the pipeline and now the fracking bill veto, environmentalists have speculated that Christie’s focus on a political future beyond New Jersey is at play. Jeff Tittel, head of the New Jersey chapter of the Sierra Club, a major environmental group, said the governor’s “true agenda…is national political ambitions”—and being accepted by Washington’s pro-fracking lobby.

The governor’s office did not respond to comment by deadline.

State Sen. Joe Pennacchio, who was in the minority that voted against the bill, agreed with the governor’s decision. According to Pennacchio, the fracking bill involves energy issues that “are much broader than New Jersey and involve our national defense and national economy—both of which can use a lot of help right now.” By rejecting the bill, New Jersey can take part in an industry that is providing domestically produced energy and jobs, he said.

Many U.S. House and Senate Republicans—and increasingly, Democrats—similarly support fracking because they say it’s good for the economy and provides jobs.

Those against the practice and the waste it generates cite environmental and public health concerns. Environmentalists are especially wary of a type of fracking waste called produced water—water from deep underground that can contain heavy metals and radioactive material. When a well is first tapped, flowback, a mix of the slurry cocktail used to blast open the rock and minimal amounts of produced water, comes back up. Once oil and gas starts to flow out, produced water continues to gush out.

Under federal waste management rules, most oil and gas waste, including fracking waste, is exempt from being classified as hazardous. State rules vary on how strictly to treat the waste. According to the Sierra Club’s Tittel: Waste facilities in New Jersey “aren’t designed to handle this complex waste.”

Larry Ragonese, a spokesperson for the state’s Department of Environmental Protection, disagrees and says strict waste rules are in place.

Christie’s veto was announced late Friday afternoon, Aug. 8, when he was out of state on vacation. In a memo dated a week earlier, the governor called the bill unconstitutional, saying it unfairly discriminates against out-of-state commerce; he also referred to his decision to veto a nearly identical bill in 2012.

Fracking waste destined for New Jersey would likely originate in Pennsylvania. In fact, such waste has already made its way across the border several times. In 2011, after New Jersey regulators learned that fracking material was entering the state, they required that facilities alert the Department of Environmental Protection about receiving such waste. The regulators also required the facilities to have proper permits.

The rule would extend to local waste production, too, but there appears to be only a slim possibility that fracking could start in the state.

In the state’s northwest corner, there’s a national park called the Delaware Water Hap National Recreation Area, which may contain Marcellus shale—the same fossil fuel-rich reserves found in Pennsylvania. But according to DEP spokesperson Ragonese, the minerals in the park are insignificant. “There is really no shale region with [a] potential for fracking” in New Jersey, he said.

In the unlikely event that fracking did start in New Jersey, the proposed bill would make fracking more expensive because drillers couldn’t temporarily store any waste on active drilling pads or production sites, a common practice in the industry.

Since a similar bill was vetoed in 2012, more state senators and assembly representatives have joined the cause. This time around, the Senate voted for the bill 32-5; the Assembly favored the bill 62-16.

That’s why environmental activists believe a veto override is possible. On Thursday, Aug. 14, several groups, including the regional Sierra Club chapter and Environment New Jersey, are starting a grassroots campaign that will encourage citizens across the state to ask their senators and assemblymen for an override.

New Jersey legislators have tried to override the governor’s vetoes only about a dozen times since Christie came into office in 2010, and each time they failed. An override requires support from a super majority—that is, votes from about two-thirds of both houses.

New Jersey isn’t the only northeastern state wrestling with ways to address fracking waste. In June, Connecticut Gov. Dannel Malloy approved a three-year ban on the storage and disposal of waste in the state, a move also supported by the state’s legislature. During that time, the legislature must study the environmental impacts of the waste and decide to keep the ban, set up new waste rules, or extend the current rules for other waste to include fracking waste. 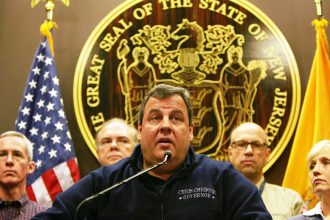