There was a moment a few years back when it seemed to Jessie Liu like the entire state of California was on fire. Mendocino, Shasta, Trinity, Lake and Santa Clara counties—all endured the flames of the hellish wildfire season of 2020.

“It hit us so suddenly and abruptly,” said Liu, a physician at La Clínica de La Raza, a healthcare facility that serves low-income, uninsured and underinsured patients in Oakland. “It’s shocking how quickly that’s become the norm, it’s something that we are now expecting. We were very fortunate this year to have a relatively light— knock on wood—wildfire season. But we can’t expect to be this fortunate here and in the years to come.”

Liu and her patients have not yet faced evacuation because of the fires, but she figures it’s a question of when, not if. And when that moment comes, Liu will have a new tool to help ease the abruptness.

Climate experts at Harvard and officials with the nonprofit humanitarian relief agency Americares have prepared a first-of-its-kind series of open-source reference materials to help healthcare facilities successfully withstand a range of natural disasters.

The reference information, known as the Climate Resilience for Frontline Clinics Toolkit, contains detailed guidance for healthcare administrators, physicians and patients on topics ranging from dealing with power outages to crafting social media posts to managing the treatment of patients with such ailments as kidney disease, diabetes and asthma.

The information, which was largely compiled using survey data from clinic workers who were asked what they wish they knew about treating patients during natural disasters, is available as a series of downloadable pdfs at the toolkit website.

The first reference materials, which were released this summer, were focused on helping facilities, doctors and their patients successfully navigate extreme heat events. Officials recently released guides focused on wildfires, and an informational module concerning hurricanes will soon be available to all.

The effort, a collaboration of the Center for Climate, Health and the Global Environment at the Harvard T.H. Chan School of Public Health, and the Harvard Global Health Institute, is specifically designed for use by free and charitable care health clinics. Biogen, the Massachusetts-based biotechnology company, has been a key sponsor of the project.

In future years, the designers of the toolkit hope to expand availability of the resources so they can be used by healthcare facilities in low-income countries.

Designers of the toolkit said it occupies a unique position as a source of medical information that simultaneously provides resources both for those who work in hospitals and those who are treated in them. Policy manuals and communication plans are typically designed for healthcare administrators. Medical reference books are aimed at providers. And healthcare information pamphlets are usually reserved for patients. But with aspects of the toolkit designed for each of those audiences, its creators say it is distinctly able to serve all three of those groups.

“What we want to make sure we get is a crucial interface between healthcare systems and patients that is potentially uniquely able to keep people safe,” said Aaron Bernstein, the director of the Harvard climate center.

Bernstein said that the information contained in the toolkit was designed with an eye toward anticipating potential issues and providing opportunities for planning and practical decision making.

“If someone has serious medical problems and says, ‘You know, I really would like to evacuate. I just have no idea how I can do it. I don’t have a car or there’s nowhere for me to go,’” Bernstein said. “There’s a lot of folks who may not have thought as much about not only how they would and where they would evacuate to, but, again, critically, whether their medical conditions may make it so that it’s even more important for them to be proactive. And I think a provider can really underscore that.”

Being proactive is a chief concern for providers like Jessie Liu. She said the open-source nature of the toolkit—which keeps it free, adaptable and easy to access—is vital given that many of the patients she serves are low-income.

“In particular for our populations who are at greater risk because of their lower socioeconomic status, greater percentage of outdoor laborers, by way of being Black, brown, native and living in communities and neighborhoods that have historically been marginalized and under-resourced, we are wanting to be able to provide culturally appropriate and easily accessible resources,” Liu said.

And the importance of providing that information goes beyond simply addressing medical concerns.

“We are the bastions of health for our communities,” Liu said. “We’re at the front lines and patients and communities come to us. They trust us. We have to–it’s our responsibility and our role to provide that information and that guidance, especially in these natural disasters that are known to have such great impacts on human health.”

Kristin Stevens, senior director of climate and disaster resilience at Americares, said the focus on health clinics like Liu’s is intentional.

“The health centers that we work with have historically been on the sidelines of disaster preparedness initiatives for health institutions,” Stevens said. “The focus is always on hospitals first, and then nursing homes … health centers are at the way outer rim of funding and attention and focus.”

Stevens said health centers tend to care for patients who are most vulnerable to the impacts of climate change.

“The climate crisis is a global crisis, but the impacts are personal,” she said. “It is impacting individual people on a daily basis. It is making people sicker. It is killing people. It is taking people further into poverty. So I really want people to understand that, yes, this is a global emergency and the world needs to get together and respond.”

She said the climate crisis is an “all-hands-on-deck emergency” and she said she sees the toolkit as being one very important piece in meeting a very specific need.

“It is one piece in a whole,” said Stevens. “In the emergency management world our work is so focused on the operational part of it that marrying it together with this clinical work, this is a new approach.”

“These are the force multipliers,” she added. “So this is when you put two things together and you get an outcome that’s greater than the sum of the parts. And so if we can build one another, we’ll be able to go farther faster.” 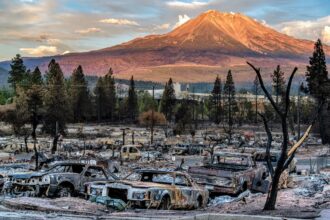 A Timber Mill Below Mount Shasta Gave Rise to a Historic Black Community, and Likely Sparked the Wildfire That Destroyed It 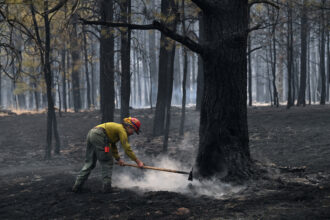 The US Forest Service Planned to Increase Burning to Prevent Wildfires. Will a Pause on Prescribed Fire Instead Bring More Delays? 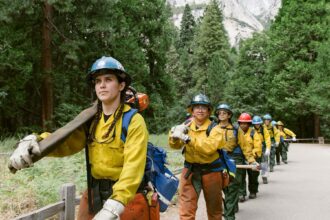 This Program is Blazing a Trail for Women in Wildland Firefighting

By Jessica Kutz, The 19th