In Oregon, new legislation would require state officials to consider the “cumulative” impact on neighborhoods already overburdened by pollution before granting permits to projects that potentially pose a threat to human health or the environment.

In Illinois, a bill would dedicate more than $27 million annually over the next 10 years to fund clean energy and climate initiatives in low-income communities of color by 2030.

And in Massachusetts, lawmakers immediately promised on Thursday to refile a bill that would for the first time codify the definition of an “environmental justice community” in state law after Republican Gov. Charlie Baker vetoed it, providing an early indication of how contentious the issue could become.

Those measures are a few of the growing number of proposals that have been passed or are under consideration across the United States that explicitly address the issue of “environmental justice,” the idea that low-income communities and communities of color tend to be disproportionately exposed to pollution and benefit the least from government regulation and investment.

For decades, studies have shown that poorer neighborhoods with a higher percentage of Black, Indigenous and other people of color are more likely to be located near hazardous waste sites, suffer more frequently from polluted air and are hit hardest by climate change and Covid-19.

Now, after a year marked by fierce calls for racial justice and a pandemic that laid bare the country’s racial and socioeconomic disparities, many environmental activists and energy policy experts foresee 2021 as a breakout year for environmental justice legislation.

And with President-elect Joe Biden’s inauguration less than a week away, some also see the year as an opportunity to not only rally more state governments around environmental justice issues, but to move the needle at a federal level.

“This is a pivotal moment in history in which a majority of our country is finally starting to recognize the long-lasting impacts of systemic racism,” said Jillian Blanchard, director of the climate change program for the legal advocacy group Lawyers for Good Government. “Environmental justice has to be part of that reckoning.”

One of the biggest victories for the 40-year-old environmental justice movement occurred in 1997, when federal officials amended the National Environmental Policy Act to require agencies to weigh the indirect and cumulative impact of polluting projects before permitting them.

The move forced federal regulators to consider whether a community already faced significant pollution from facilities such as landfills, chemical factories or power plants. But last July, the Trump administration rolled back those requirements, putting them among the more than 100 environmental regulations that the administration has watered down or reversed over the last four years.

Opposition to Trump, Bullard said, is partially responsible for New Jersey being able to pass a groundbreaking environmental justice law last August. While at least a dozen states require a cumulative environmental assessment for polluting projects, New Jersey is the only state that requires regulators to deny a permit if a project is found to add an additional burden on minority and low-income communities that already face health and environmental threats.

Lawmakers in several states, including in Oregon, California and Illinois, have crafted similar legislation that they plan to introduce this year.

The “inactivity … resistance and hostility toward environmental justice at the federal level” has only encouraged clean energy, climate and social justice advocates to team up and push for change at the state level, Bullard said. “That’s how you get real legislation, and we see that happening in a lot of places now.”

Environmental justice advocates also see a key moment to advance their agenda at the federal level.

President-elect Joe Biden has promised to make climate change and environmental justice central to his administration’s policy making. And with surprise wins in the two Georgia runoff elections, Democrats will soon control the 50-50 Senate, with Vice President Kamala Harris breaking tie votes. That makes it far easier for the new administration to pass laws and nominate progressive candidates into key cabinet positions.

The Senate majority is particularly important since Biden has already nominated climate and social justice-oriented candidates to the cornerstone agencies executing his climate and environmental agenda, such as the Environmental Protection Agency, the Interior Department and the Department of Energy.

Many activists see Biden’s pick to run the EPA, Michael Regan, as a key player to reversing many of Trump’s environmental rollbacks and revamping Obama’s Clean Power Plan, which aimed to more stringently regulate pollution and greenhouse gas emissions from the nation’s power plants.

Activists are also hoping the new Congress will be able to pass the Environmental Justice Act, a bill led by Sen. Cory Booker (D-N.J.), the former presidential candidate. The bill, which Booker last introduced to the U.S. Senate in 2019, would require all federal agencies to consider environmental justice issues when crafting policy or when issuing permits under the Clean Air and Clean Water acts. And it would establish a permanent National Environmental Justice Advisory Council, among other things.

With the narrow lead Democrats hold in the Senate, it’s unclear if such an ambitious bill would clear Congress. While cabinet and Supreme Court nominees require just 51 votes in the Senate to pass, legislation requires 60.

Even without major federal legislation, Biden could still work environmental justice principles and language “more subtly” into bigger infrastructure bills, said Lawyers for Good Government’s Blanchard. “All in all, we’re excited to see Biden rise to the occasion and take strong action to address climate change and environmental justice issues,” she said.

Biden has also promised a number of structural changes:

And he has proposed overhauling the EPA’s External Civil Rights Compliance Office to empower under Title VI of the 1964 Civil Rights Act “communities that experience the worst aspects of climate change and fenceline communities that are located adjacent to pollution sources.”

As Activists Gear Up, the Fossil Fuel Industry Fights Back

As activists gear up to push environmental justice bills through Congress and state legislatures, there’s already evidence coming from New York that the fossil fuel industry is upping its efforts to block them.

Energy companies and fossil fuel groups, including the American Petroleum Institute, spent about $3 million in 2019 and more than $1.5 million in the first half of 2020 on New York City and New York state lobbying efforts, according to a new report that analyzed hundreds of disclosures filed with the New York Joint Commission on Public Ethics.

That’s the largest spending spike in fossil fuel industry lobbying since the state banned fracking in 2014, the report’s authors said. The record spending also coincided with the state passing its ambitious climate law, requiring New York to reduce greenhouse gas emissions by 85 percent from 1990 levels by 2050, and establishing a permanent Environmental Justice Advisory Board.

Several of the companies have hired some of New York’s biggest lobbying firms, said Justin Wood, an organizer with New York Lawyers for the Public Interest, one of the groups involved in releasing the report.

Woods said the spending is evidence that the fossil fuel industry was attempting to block or water down the state’s recently passed climate and environmental justice bills. It’s also an indication that the industry is likely “gearing up” for another big fight this year in New York and across the country, he added.

In recent months, activists have been increasing their calls for New York lawmakers and Gov. Andrew Cuomo to take up a bill that would tax polluting companies and use that revenue to reinvest in the state’s communities most affected by climate change and pollution.

Passing that law would likely make it less lucrative for companies to invest in New York state fossil fuel development, which several of the companies included in the report are currently doing. That includes a proposal to build new gas-fired turbines in Astoria, Queens—a community with a large contingency of people of color.

“It wouldn’t surprise us if their thinking is, ‘Let’s get the shovels in the ground and build this thing before there’s even more state climate regulation that says we can’t build it in this community,’” Woods said.

This article has been updated after an earlier version incorrectly stated the amount of money dedicated in an Illinois bill to fund clean energy and climate initiatives in low-income communities of color by 2030. The correct amount is more than $27 million annually over the next 10 years, not $2 billion. 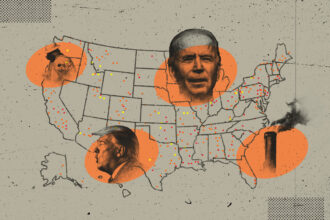 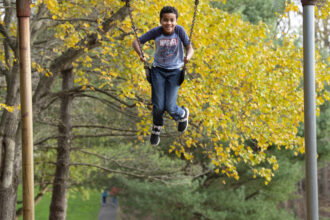 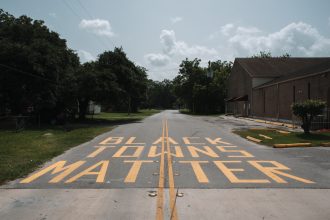