With 6,000 dairy cows, 5,000 beef cattle and thousands of tons of apples, potatoes and cherries produced annually, Royal Dairy in Royal City, Washington, uses hundreds of millions of gallons of water per year. All that water, once used, carries animal waste, pathogens and environmentally harmful chemicals, like nitrate, that can contaminate groundwater and contribute to greenhouse gas emissions.

To prevent that from happening, though, Royal Dairy cleans and reuses its water more than 10 times before the water leaves the farm. The dairy has also cut its nitrate pollution and lowered its greenhouse gas emissions, all thanks to a new kind of wastewater filtration system powered by worms.

Every day, half a million gallons of farm wastewater is pumped through a gigantic bed of earthworms. The worms, wiggling in wood chips and shavings, feast on the liquid manure and wastewater, removing nutrients and harmful chemicals from the stream. The water then percolates through a layer of crushed rock, collects at the bottom of the worm bed, and travels out an exit pipe for Austin Allred, the farm’s owner, to use on the farm once more.

Allred is one of two dairy farmers in the United States currently using such a system, called a vermifiltration system, to manage wastewater. The system, installed by a company called BioFiltro, could be one solution to agricultural pollution problems, especially as states require dairies to implement better water management plans and eliminate nitrate from their wastewater.

The dairy industry is a “significant contributor” to nitrate pollution in the groundwater in agricultural regions like California, said Clay Rodgers of the Central Valley Water Board. Nitrate, a chemical found in most fertilizers, manure and human sewage, is thought to be carcinogenic in drinking water, and has been investigated as a risk factor for pregnancy complications. Drinking water with high nitrate levels can be a factor in the development of methemoglobinemia, sometimes called “blue baby syndrome,” a disease that affects the ability of blood to deliver oxygen to the body.

Climate change-fueled droughts could be worsening the nitrate pollution problem, too, as the state is experiencing its second extreme drought in a decade.

Drought so severe makes for a smaller snowpack in the Sierra Nevada mountains. As a result, far less water flows into the Central Valley. Without the irrigation provided by this water, farmers are left to rely more heavily on wells that access groundwater. As farmers and towns in the Central Valley pump more and more from these wells, they can begin to pump up nitrate-contaminated water, too. Think of it like drinking through a straw—the nitrate-contaminated groundwater sits on top of cleaner, deeper groundwater. As the water below is depleted, nitrate begins to seep into the well.

“We’re actually seeing a change in groundwater quality, which was quite surprising,” said Zeno Levy, a United States Geological Survey research geologist. Levy was the first author on a 2021 study showing how drought can introduce nitrate into groundwater.

According to the National Drought Mitigation Center, most of California is currently experiencing “severe” to “exceptional” drought, and in April, Southern California officials declared a water shortage emergency.

California has made reducing nitrate pollution a requirement for agricultural producers. CV-SALTS, a collaborative water quality effort of the California State Water Board and Central Valley Water Board, requires dairies to submit nitrate management plans for their facilities and any cropland where wastewater is applied.

Vermifiltration systems like BioFiltro’s can be part of these nitrate management plans, as they reduce nitrate in the water before the water is spread on crops. While the percent reduction in nitrate depends on a number of different factors, like temperature, pH, and the types of microbes living in the system, one study, funded by BioFiltro, found that it removed 84 percent of total nitrogen (a nitrate precursor) from the wastewater. A 2022 study of a vermifiltration system done by researchers at the University of Nebraska-Lincoln found reductions of total nitrogen between 53 and 61 percent.

The poop that the worms generate, called castings or vermicompost, is a highly valuable soil additive the farmers can either use on their own farms or sell. The vermicompost contains microbes that help fix nitrogen to the soil, making fertilizer applications more effective and efficient, said Mai Ann Healy, BioFiltro’s sustainability officer.

The worms, she said, can also help a dairy use less energy in its wastewater treatment. Typical wastewater management requires dairies to add oxygen to the wastewater. That aeration, if done by pumping air into the water, takes energy. When worms burrow through the wastewater, though, the worms do the aeration instead.

Vermifiltration has also been shown in some cases to reduce methane emissions on dairy farms. Methane, a greenhouse gas far more powerful than carbon dioxide, is a byproduct of cow manure and cow burps. On dairy farms, methane is released into the atmosphere or captured by a manure digester. BioFiltro’s study, for example, found that the system reduced methane emissions on the dairy by 97 percent when compared to a dairy without an emissions containment system. A 2022 study out of Washington State University found similar results.

There’s a particular climate benefit to using vermifiltration in place of digesters: While digesters capture the methane that manure produces, vermifiltration prevents that methane from ever existing in the first place. That’s good news for some community advocates, who worry that digesters aren’t a foolproof climate solution and want dairies to reduce—and not just capture—their methane emissions.

Digester developers prioritize dairies that are closer to existing gas pipelines, so that the biogas captured can be sent elsewhere in the state. Healy said BioFiltro’s system is a good alternative to digesters for farms that aren’t near an existing pipeline network. BioFiltro is also more economically feasible on smaller farms that don’t have enough cows to make a digester profitable, she said.

Allred said the system has helped Royal Dairy get one step closer to its goal of scaling up sustainability. While there are plenty of farms that use sustainable management methods, those farms are often smaller, serve specialty markets and sell their products at a higher price. Allred’s goal is to prove that sustainability can be a realistic option for large-scale operations like his.

“[We’re] taking regenerative ag and the concepts that we’ve learned from these small-scale farms and blowing it up, to be able to feed the masses,” said Allred.

Allred estimates the cost of BioFiltro’s system for his farm at about $25 to $30 per acre. That cost, to him, is not even “in the same arena” of what it would cost to build a digester. With the clean water he’s able to reuse, the carbon credits he gets, and the soil additives the system produces, he said the vermifiltration system has a “pretty good” return on investment.

Recently, the BioFiltro system was approved to become part of the California Department of Food and Agriculture’s Alternative Manure Management Program, which provides grants to farmers to install sustainable greenhouse-gas reducing projects. Even with those incentives, though, digester projects receive higher grants from the CDFA—this year, the CDFA limits grants for digesters at $1.6 million, while grants for the Alternative Manure Management Program are capped at $750,000.

Dairy farmers with large enough herds, then, might make a potentially more profitable choice for their manure management, said Allred—installing a digester. California, for example, has invested millions in digester development, and other states are following suit. The state’s Low Carbon Fuel Standard gives dairy farmers credits for producing biogas with manure digesters that they can sell or trade. Depending on their arrangement with the digester developer, some dairies get a cut of the profits from selling the biogas, too.

Sabina Dore, the lead author on BioFiltro’s study, said the low adoption is also because the system is newer and not on the radar of many dairy farmers. However, she said, BioFiltro is competing with digesters, which have more financing help in general. “There’s a lot of money behind [digesters],” said Allred. Royal Dairy does not have a digester.

Genevieve Amsalem, research and policy director at the Central California Environmental Justice Network, agrees. “I think the incentives are designed in a way to promote the development of transportation fuels, rather than agro-ecological solutions,” she said.

Allred is glad Royal Dairy took the leap, and he hopes the practice will grow. “Farmers are looking to clean their water up and to keep nutrients on their farm the best they can, in forms that support our soils,” he said. 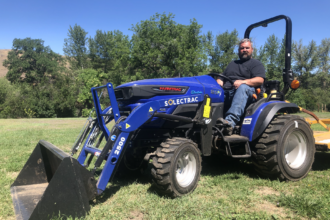