Dinosaurs have become the latest point of contention in the Keystone XL debate.

More than 100 miles of the proposed oil pipeline will slice through one of the most valuable fossil beds in the world and, depending on whom you ask, construction will either doom or aid the recovery of important fossils.

Paleontologist Peter Larson fears the construction equipment will grind up everything in its path. “The machines move so fast … [any fossils] will go through the shredder,” he told InsideClimate News.

He’s particularly concerned about sections of the Hell Creek Formation in southeast Montana and western South Dakota. The formation holds an impressive record of the last dinosaurs to walk the earth, including multiple T-Rex and triceratops fossils.

As president of the Black Hills Institute of Geological Research, Larson has a vested interest in the formation’s future. His company is in the business of selling fossils to collectors and museums, and many of its specimens come from the Hell Creek Formation. In addition to fossil sales, the company conducts scientific research and prepares fossils for museum display.

Paleontologist Paul Murphey, on the other hand, believes construction will actually help scientific research. For three years he has worked as a consultant for TransCanada, the Alberta-based company that wants to build the Keystone XL pipeline, helping it follow state and federal guidelines that safeguard fossils discovered at work sites.

“I’m excited about the potential for the discovery of previously undiscovered fossils, and the knowledge we can gain from them,” he said.

Murphey works in the field of mitigation paleontology, which means he helps protect and recover the fossils found at construction sites. “What we’re charged with is…to minimize damage as much as possible.”

If approved, the 1,702-mile Keystone XL pipeline would pass through six states and pump up to 830,000 barrels of tar sands oil a day from Canadian mines to refineries on the Gulf Coast. The U.S. State Department has permitting authority on this international project, and a final decision is expected by January.

Pipeline opponents have criticized the project for its environmental impacts, including greenhouse gas emissions and potential oil spills. In late August, Keystone XL protestors organized an extended sit-in before the White House. More than 1,200 protestors were arrested during the two-week event.

TransCanada Has Adjusted the Route for Fossils

Murphey oversees all the fossil surveys done for TransCanada in South Dakota and Montana. He has traveled along the construction route with teams of paleontologists and is in charge of creating a mitigation plan to ensure that TransCanada follows the guidelines for fossil protection.

The company has already rerouted the pipeline by several miles based on his recommendations, he said. “If we know there’s a significant resource there already … the preference has been to go around the fossil and leave it undisturbed.”

If the pipeline is approved, Murphey said, paleontologists will monitor the work sites and stop the machines whenever they spot a fossil. TransCanada will then reroute construction to allow for fossil excavation. Anything unearthed on private land will be given to the landowner. Fossils from federal land will be made available to researchers and museums.

The Hell Creek Formation has the potential to yield spectacular finds. “[It’s] arguably the most famous dinosaur burying ground in the world,” said Tyler Lyson, a graduate student of paleontology at Yale University.

Many of the dinosaur fossils have enormous commercial value, and the presence of T-Rex and triceratops—two of the most popular dinosaur species—only increases the formation’s significance. In 1997, a nearly complete T-Rex fossil skeleton from Hell Creek sold at auction for more than $7 million dollars. The Black Hills Institute helped excavate the fossil, and the money went to the landowner on whose property it was found.

The formation is also important to academic paleontologists, said Lyson, because it holds a good record of the meteorite impact that killed the dinosaurs 65.5 million years ago. Scientists call that event “the K-T extinction.”

In total, the extinction wiped out 60 to 70 percent of life on earth. Since the Hell Creek Formation includes fossils from immediately before the K-T boundary, it’s a good place to study the extinction in detail, Lyson said.

Lyson has a personal interest in the Hell Creek Formation. He directs the Marmarth Research Foundation, a non-profit education and research center that focuses on fossils from the formation. He’s also writing his PhD thesis on the evolution of turtles after the K-T boundary; his field area in eastern Montana and southwest North Dakota includes sections of the Hell Creek Formation, as well as another formation with fossils from after the extinction.

Lyson isn’t too worried about the impacts of pipeline construction. He trusts the established guidelines for fossil protection and has seen numerous examples where pipelines were moved to avoid fossil sites. There are pipelines “all over the place” in his field area in North Dakota, and he said they generally don’t impede his work.

But Larson, the paleontologist from the Black Hills Institute, doubts that construction workers will be able to avoid all the important fossils.

In 2009, he wrote a letter to the South Dakota Public Utilities Commission urging it to consider an alternate route that would avoid the Hell Creek Formation altogether. The commission, which is in charge of pipeline siting in the state, approved the current route in 2010.

Murphey, the TransCanada consultant, admits that construction equipment may break some fossils. But he said most fossils are already broken when they’re found and that fossil repair is a normal part of the preparations for museum display.

“There are certain museum [fossil] collections in the country that are made up entirely from construction projects,” he said. “It’s a very successful procedure.” 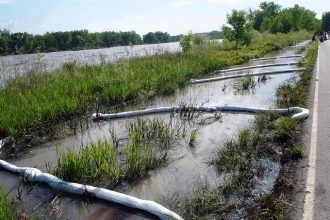