The term “reskinning” may sound like a word straight out of a science fiction novel, but in actuality it means retrofitting the exteriors of aging buildings with energy-saving facelifts, and the practice is taking off — especially in Canada and Europe.

Ron Dembo, a former computer science professor at Yale University who founded the Toronto-based carbon software company Zerofootprint, coined the term in 2009. His inspiration came in part from being steeped in data on carbon pollution management.

Dembo said that the role of buildings in global warming is too big to ignore, especially in major cities, where they account for 60 to 80 percent of greenhouse gases. “Buildings were built inadequately and they leak heat or cold,” he told SolveClimate News. “They have insufficient skins or exteriors.”

While he admits to recycling the concept from the architectural community — where it is more commonly known as “recladding” — the name reskinning, at least, is all his. The idea behind the new brand, he said, was to make buildings seem more human-like.

“While we usually see buildings as fixed, solid objects around us, if we think of them as having a ‘skin,’ we see them as more human, that they participate in the environment around us, especially as it relates to climate change,” Dembo said.

“Reskinning is the positive side of global warming. We can rethink these cities. With new skins and exteriors, we can make them more beautiful and at the same time more efficient.”

An Architecture Prof with a Vision

In 2010, Dembo’s company Zerofootprint paired up with the John H. Daniels Faculty of Architecture, Landscape, and Design at the University of Toronto to launch the first-annual Re-Skinning Awards. The competition celebrates the year’s most successful “holistic” retrofitting projects.

Ivan Saleff, an architect and professor at the Daniels Faculty, helped to evolve the concept of reskinning and knows firsthand its value to decaying urban infrastructure.

For decades, Toronto’s vintage high-rise apartment buildings were on Saleff’s radar. As a student in the early 1970s, he worked summers for the buildings’ constructors. And just over a decade ago, he started to notice vertical metal cladding, usually reserved for low-budget industrial buildings, popping up on the faces of the vintage towers.

“Not only did I find this unacceptable from an aesthetic point of view, but I also wondered what was going on behind the metal cladding,” Saleff told SolveClimate News.

Upon investigating the “makeovers,” Saleff determined that the vast majority of them were cosmetic and simply obscured deteriorating masonry. “There was no insulation or air and vapor management systems present. They were still deteriorating and continued to squander energy,” Saleff said.

“I began photographing and conducting research relating directly to this vintage typology. I was able to retrieve original blueprints of many such buildings from my father’s archives, and subsequently conducted a graduate-level, research-based elective course on this topic at University of Toronto called ‘Armature, Skin and Surface.'”

Saleff’s course became ground zero for the practice of overcladding vintage buildings with new insulated skins in ways that have minimal impact on the people living in them — what’s now known as reskinning. The class attracted graduate students from architecture, urban design, landscape architecture and doctoral-level engineering students.

At its heart, reskinning solves a fundamental conundrum with aging buildings: the lack of a “thermal break” between interior and exterior walls to prevent heat from leaking out or coming in during summer months.

In a paper called “Tower Renewal Guidelines,” written with Ted Kesik, a colleague of Saleff’s on the Daniels faculty, the duo explain that applying a new “skin” over the building insulates the exterior and covers “thermally conductive” slab edges, conserving energy. The new building skins also often include sun shading and can be integrated with services like geothermal heating.

How big is reskinning today? According to Saleff, it is catching on all over the world, primarily in Canada, the Nordic European nations and across Western Europe.

Particularly in the European Union, countries have used reskinning of deteriorating buildings to help meet carbon-reduction goals, Kesik explains in a recent blog post. In Bratislava, for instance, an entire district of hundreds of tower blocks is being “reskinned” as a condition Slovakia’s acceptance to the EU.

Generally, “everyone is jumping on the ‘green bandwagon’ because it is such a powerful marketing mechanism,” Saleff said. “Private owners all over … and not just in Toronto or Canada are conducting building renewal, which goes beyond towers and includes other typologies of all scales. They are involved in renewal because it is an inevitable need, which makes good business sense and indirectly supports the ‘green economy.'”

The U.S. Green Building Council (USGBC) touts green building as the bright spot in the U.S. economy. It represented $60 billion of the construction industry in 2010 and is projected to increase to $96 to $140 billion by 2013, according to figures from the group.

And from there, it could explode.

In a boon to the industry this month, President Obama unveiled the Better Buildings Initiative during a visit to Penn State University — a plan to make the nation’s commercial buildings 20 percent more efficient over the next nine years. Efforts taking place at the federally funded Energy Innovation Hub for Energy Efficient Buildings at the Philadelphia Navy Yard, where 90 organizations are developing green building technologies, will play a big role, the president said.

The effort in Philadelphia is expected to create thousands of engineering, manufacturing, construction, installation and retail jobs, he added.

“Improving building efficiency may not sound too sexy until you realize that our homes and businesses consume 40 percent of the energy we use,” Obama said in a talk delivered on the campus. “The good news is we can change all of that. Making our buildings more energy-efficient is one of the fastest, easiest and cheapest ways to save money, combat pollution and create jobs right here in the United States of America.”

For Saleff and Kesik, however, reskinning offers something beyond carbon savings and jobs for the world’s cities: healthier and more attractive neighborhoods.

“Aging modern towers may be our greatest urban resource,” Saleff and Kesik wrote in their paper. “They present opportunities for significant greenhouse gas reductions. Thoughtfully managed, they may once again transform a region, enabling vibrant neighborhoods, healthy communities, and a sustainable built environment.” 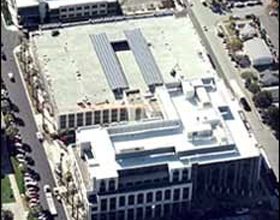 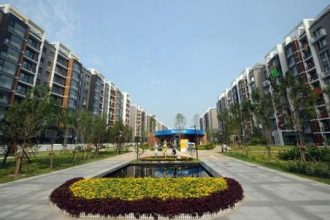 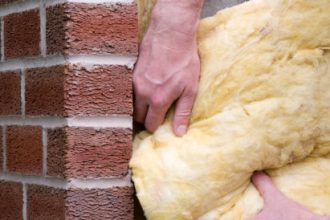 How Green Retrofits Could Save the World