As California struggles to adapt to historic droughts and wildfires fueled by the climate crisis, state legislators are taking money from fossil fuel companies and dragging their feet on climate action, activists and members of a legislative climate caucus said during a press call Tuesday.

California’s woeful progress on climate solutions earned the state a near failing grade from an environmental group that evaluates politicians’ voting records, budgets and policies in order to hold government officials accountable.

The state’s failure to pass meaningful climate measures last year prompted the California Environmental Voters, or EnviroVoters, to give the state its first “D” since the group began issuing its annual scorecard in 1973.

“This is the first time in history we’ve ever given California a score this low,” said Mary Creasman, CEO of EnviroVoters, formerly the California League of Conservation Voters.

“This is unacceptable in a state like California,” she said. “Everybody is paying attention to what California does, and looking at us to create the models for action.”

The group didn’t give California an F, Creasman said, only because the state made “significant investments” related to climate in the budget last year.

California legislators haven’t enacted significant climate legislation since 2018, she said, when they passed a law requiring 100 percent of retail sale of electricity to come from renewable energy and zero-carbon sources by 2045.

That year, the state’s Environmental Protection Agency released a report warning of an increasingly stark future under climate change. The report came on the heels of several years of record-setting temperatures, the historic 2012-2016 drought and the largest, deadliest wildfires on record at the time. Last year’s wildfires were even worse.

The slow action on climate change is partly a consequence of the nature of representative democracies, said Assemblymember Steve Bennett (D-Ventura), who authored and passed a bill that holds the oil and gas industry liable for the costs of cleaning up abandoned wells.

“Politicians don’t get popular by asking people to make sacrifices today to solve the problems that come 15 or 20 years down the road,” said Bennett, a member of what EnviroVoters calls the Climate Action Caucus for its “bold action” to address the climate crisis.

But the magnitude of the climate crisis and consequences in store for California demand a sense of urgency, Bennett added. “We’ve already passed so many deadlines that have been out there. But we have to have a sense of fire in us that there is not time to waste.”

California lowered carbon emissions by just 1.6 percent between 2018 and 2019. Emissions need to drop by two to three times that rate to stave off the worst of the climate crisis, Creasman said.

So EnviroVoters started following the money.

The lowest scoring Democrat in the legislature, Rudy Salas (D-Bakersfield), represents Kern County, the heart of California’s oil industry. Salas has received more than $280,000 in campaign donations from the oil and gas industry since 2012, a review of records filed with the campaign finance portal Follow the Money shows.

“We only have until 2030 to enact massive change on the climate crisis,” Creasman said.
Yet “climate delayers” are standing in the way, she said, saying they believe in the science of climate change on the one hand while continuously delaying action on the other.

Beyond campaign contributions, the oil industry spends millions of dollars to influence politicians and regulators, treating them to stays at five-star resorts and expensive dinners. Between 2018 and 2021, oil lobbying organizations spent almost $77.5 million advocating for the oil industry’s interests, EnviroVoters research shows.

State Senator Lena Gonzalez (D-Long Beach) represents a community besieged by pollution from industries like metal processing plants and diesel emissions from the second-busiest container port in the United States.

“There is a lot that folks in my district specifically are dealing with and why I don’t have the luxury myself to wait as a legislator on these climate policies,” Gonzalez said. “And so my big question is, what are we waiting for?”

Gonzalez sponsored a bill to add environmental justice representatives to the South Coast Air Quality Management District, but the bill failed to pass the Senate.

“We’ll continue to push to ensure that we see environmental justice representatives in some of our largest air quality management districts,” Gonzalez said. “That’s exactly what we need, the voice of those who live and work in these areas to lift up the issues of climate justice.”

Chiu, who left the Legislature a few months ago, said his one regret was that he left before California enacted major measures to tackle the climate crisis. “If we don’t take real, significant action in the near future, the state of our planet, our very future are at risk, the lives of our kids and our grandkids are at risk,” Chiu said. “We have no choice. We have to act.”

Chiu pointed to the prospects for wind off the California coast to provide both clean power and jobs for tens of thousands of workers. “We need to invest in a smart, reliable electrical grid to support the decarbonization of many of our sectors, and ensure that all Californians have the power that they need,” he said.

That means designing grids that match supply and demand and are tailored to meet regional needs, he said, while also prioritizing low-income households and requiring that communities have a say in policies that affect them.

One way to finance the costs of helping communities adapt to climate-driven calamities is by requiring the companies who laid the groundwork for the crisis to foot the bill. In 2017, San Francisco and Oakland sued Chevron, ConocoPhillips, ExxonMobil, BP and Royal Dutch Shell to pay the costs of building sea walls and other infrastructure to protect the cities from rising seas.

“We are in the midst of a significant lawsuit to hold five of the largest oil and gas companies in the world accountable, asking courts to hold them responsible for the cost of infrastructure that’s necessary to protect cities from the consequences of climate change due to sea level rise because of the massive production of fossil fuels,” said Chiu.

State Senator Scott Wiener (D-San Francisco) is taking a similar tack. His Climate Corporate Accountability Act passed the Senate floor in January, he said, after “a huge fight” with the fossil fuel industry. The bill, cosponsored by EnviroVoters and other groups, would require the largest corporations in the world to disclose their entire footprint, including from their supply chain, Wiener said.

Transparency will create a major incentive for corporations to reduce their carbon footprint, Wiener said, and put an end to greenwashing. “Some of our biggest corporations portray themselves as green, when if you look at their actual carbon footprint, including their supply chain, they’re anything but green.”

And that includes the state of California.

“We’ve got a huge pension plan here, nearly $800 billion in assets,” said Gonzalez. “But about $10 billion of those [assets] are being invested now in fossil fuels.”

Gonzalez and Wiener introduced a bill last month calling for the state to divest from fossil fuels. And with California projecting a budget surplus of tens of billions of dollars, it’s vital that Californians see direct climate investments in their communities, Gonzalez said.

These dollars should “go right back into the communities” to support policies that will make people’s lives better and “improve this climate change world that we live in.”

For all the challenges California faces, there’s good news, Creasman said. California voters across the state are feeling the impacts of climate change—fires, extreme heat and droughts. They say climate change is their top priority.

“We have the policy solutions,” she said. “What we need to do is build the political power and hold our leaders accountable.”

And that means taking actions worthy of the state’s reputation as a climate leader. 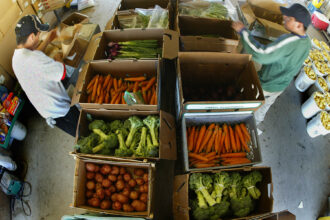 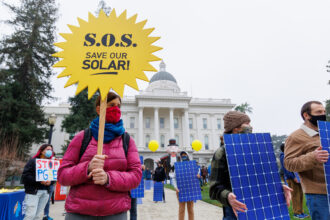 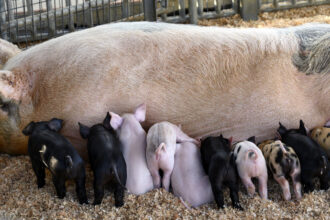