The stage has been set for an appeal of a high profile verdict against a Texas oil and gas company after a judge refused to grant a new trial in the case of a family sickened by noxious air emissions.

Judge Mark Greenberg has denied a motion by Aruba Petroleum for a new trial, letting stand the $2.9 million jury award to Lisa and Bob Parr who sued the company after gas and oil wells surrounded their once rural ranch south of Dallas.

Greenberg’s one sentence order didn’t offer a reason for his decision. It simply said: “Aruba Petroleum’s motion for new trial is … denied.”

Aruba spokesman Fred Stern said the company will now take the case to the Texas Court of Appeal.

“The company is disappointed with the trial court’s decision to deny its motion for a new trial,” Stern said in a prepared statement.

In its motion for a new trial, Aruba contended the Parrs should have lost because they didn’t prove they were sickened by emissions from Aruba facilities caused; that the damage award was excessive, and that a juror should have been excluded from the jury because he had a misdemeanor criminal record.

Lisa Parr said the judge’s decision was more confirmation that her family has been subjected to unhealthy doses of toxic fumes from the drilling operations that come within 100 yards of their house.

“We told our story to a jury and they believed us. The judge looked at everything and he believed us,” Parr said. “This tells me that our situation was so bad it couldn’t be ignored.”

While Parr is bracing for a long fight though the appeals process, she said she hopes others will be buoyed by the judge’s ruling.

“I have said from the beginning this case was not only about us but about everybody who suffers,” she said. “I hope they can see it’s not hopeless; that they don’t just have to take it.”

Thomas McGarity, a University of Texas law school professor who specializes in environmental and administrative law, wasn’t surprised that Aruba lost its motion for a new trial.

“The defendants presented a collection of things that they claimed were prejudicial and the judge said ‘No. I think there has been a fair trial here,'” McGarity said.

He expects the case will ultimately end up in the Texas Supreme Court, because both sides have so much at stake and because the case could be used to help determine future claims involving air emissions from the oil and gas industry.

“I think this case is viewed as a test case for lots of companies engaged in hydraulic fracturing,” he said. “The issues reach across the industry and everybody wants a final answer about responsibility.”

David Davis, the foreman of the jury that decided in favor of the Parrs, said the jurors worked hard to fairly assess the evidence.

“It would appear that the defendants have not demonstrated any irregularities or that the jury did anything but consider the evidence that was presented before it,” said Davis, who was speaking as an individual, not as a representative of the jury.

In April, a Dallas County jury found that Aruba, a Plano, Texas company,”intentionally created a private nuisance” that affected the health of the Parr family.

The jury awarded the Parrs $2.9 million, an amount thought to be one of the largest judgments against an oil and gas company in connection with air emissions.

In June, Greenberg upheld the jury’s verdict, setting the stage for Aruba’s request for a new trial.

More than 100 wells have been drilled within two miles of the Parrs’ Decatur, Texas ranch, 60 miles northwest of Dallas. One of Aruba’s arguments was that it owns only 22 of those wells, so the emissions could have come from one of its competitors’ wells.

The Parrs filed their lawsuit against Aruba in 2011, contending that the company’s operations polluted their 40-acre ranch with emissions, made them sick, ruined their property value and killed their chickens.

The family was “under constant, perpetual, and inescapable assault of Defendants’ releases, spills, emissions, and discharges of hazardous gases, chemicals, and industrial/hazardous wastes,” according to the lawsuit.

The Parrs said they and their daughter experienced a variety of health problems, including asthma, nausea, nosebleeds, ringing ears and rashes. Similar symptoms have been reported by residents near drilling sites in Pennsylvania and other states.

Aruba maintains that the family failed to rule out other possible causes for their complaints.

“The Parrs’ symptoms—such as headaches, nosebleeds, and nausea, among others—are common in the general population and could have been caused by any number of conditions or events,” according to the 42-page motion.

Aruba also said the Parrs didn’t present “any legally or factually sufficient evidence that Aruba actually knew that there was an alleged invasion on the Parrs’ property,” according to the motion.

The Parrs’ attorney, Brad Gilde, disputed Aruba’s arguments in his 38-page response to the company’s request for a new trial.

He challenged Aruba’s contention that it was due a new trial because one of the jurors had a misdemeanor record. The company didn’t show that the juror was responsible for any misconduct, Gilde said in his response, and Aruba had plenty of time to research the backgrounds of the jurors and raise any issues before the jury reached its verdict.

Gilde also pointed out that the juror in question was the only juror to vote against the Parrs.

“Aruba is now attempting to profit from the disqualification of the ONLY juror who sided with Aruba at trial,” Gilde said in his response. “Even ignoring mandatory law and ignoring the absence of ‘misconduct,’ Aruba cannot show that any alleged misconduct was material.” 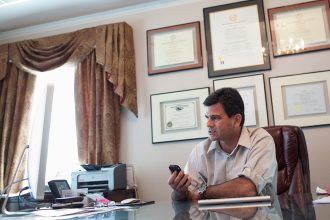 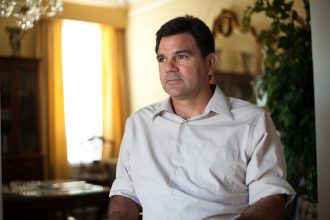