California regulators released a proposal this week that would drastically reduce the financial benefits of rooftop solar in a state that has done more than any other to nurture the solar industry.

This bitter medicine comes in the form of a proposed decision from the California Public Utilities Commission, a document that, in places, reads like talking points from utility companies that have long called for a reduction in the financial benefits for solar owners. The commission could vote on the plan as soon as Jan. 27.

I was surprised at the extent to which this plan would inflict pain on the solar industry, with provisions that include a “grid participation charge” that would be $40 to $50 per month for a typical household with rooftop solar. The charge means California would have the highest monthly utility charge for rooftop solar in the country, displacing Alabama, according to the advocacy group Vote Solar.

“The idea that California’s rooftop solar might be worse than Alabama and Wyoming is an embarrassment to the policymakers of this state,” said Susannah Churchill, California regional director for Vote Solar.

In addition to the new monthly charge, the plan would reduce the “net metering” rates that solar owners receive for selling excess electricity back to the grid. The specific changes vary depending on how long someone has had their system and other factors.

The upshot is that new rooftop solar systems will take longer to pay off through savings on utility-bills, which undercuts the financial case for installing solar.

Why is this happening in California of all places? The proposal reflects a view among utilities, consumer advocates and some environmental groups that the popularity of rooftop solar in California is leading to concerns about the costs of subsidies.

The solar industry is greeting the commission’s proposal as a dire threat. Bernadette Del Chiaro, executive director of the California Solar and Storage Association, tweeted that the plan is “a clean energy and jobs disaster.”

California has a history of being ahead of the curve on energy and environment policy, taking actions that other states later emulate. One worry for the solar industry is that the proposal will not only harm the market in California but turn into a contagion that spreads to other states.

Meanwhile, the commission said in a news release that the proposal “balances the needs of the electric grid, the environment, and consumers.” The commission highlighted provisions that would spend $600 million to increase access to solar for households with low incomes, and incentives to encourage consumers installing solar to also get energy storage.

Asked to comment about some of the criticism, a commission spokeswoman pointed to the release and to a fact sheet about the reasoning for the plan.

Here are some of the factors driving the California case that could determine what happens next:

1. This time, it’s not just utilities raising concerns about the effects of rooftop solar on electricity rates.

California has some of the highest electricity rates in the country and it also is the nation’s leader, by a mile, in electricity generation from rooftop solar.

Utilities have argued that the growth of rooftop solar is leading to a shift in costs, with predominantly affluent solar customers paying little for electricity, while the costs of maintaining the grid gets transferred to customers that do not have solar. Rooftop solar also is a threat to utility company profits, as customers produce their own electricity and buy less from the utility.

Solar advocates have acknowledged that there are some inequities in current policies, and suggested changes to address them. But the solar groups also said that utilities are grossly overstating the harm of current policies, while ignoring many of the community benefits of rooftop solar, like the reduced need to build new power plants.

This would be a familiar debate, with utilities on one side and the solar industry on the other, except that several consumer advocacy groups have taken positions similar to those of the utilities.

For example, the Public Advocates Office, an independent consumer advocate within the California Public Utilities Commission, said in a June filing that “California ratepayers currently pay too much toward incentives” for rooftop solar. The office then laid out this inequity in detail, with estimates showing that current solar policies lead to billions of dollars in subsidies paid by other consumers.

The Public Advocates Office has not hesitated to criticize utilities on other issues, so by agreeing with utilities on some of the broad strokes of rooftop solar policy, the office has helped the utilities’ views gain credibility.

The Natural Resources Defense Council has also been active in the case, supporting the view of the utilities and the consumer advocates. The organization laid out its thinking in a March blog post, arguing that the success of rooftop solar in California has led to an imbalance between the costs and benefits in a way that makes electricity more expensive for many consumers.

Another prominent national environmental organization, the Sierra Club, has been on the other side, working in tandem with Vote Solar and others to argue for policies that would be much less punitive for solar owners.

2. The California commission has set up this process in a way that has put the solar industry on the defensive.

This is not a partisan issue. All five members of the commission were appointed by Democrats who support renewable energy, either Gov. Gavin Newsom or his predecessor, Gov. Jerry Brown.

But solar industry leaders have said they are troubled by the way the commission has framed the debate.

The commission released a memo late last year outlining what it saw as the major issues that should be addressed in the case. The memo emphasized the equity arguments being raised by opponents of rooftop solar, saying, for example, that a new net metering policy should “ensure equity among customers and enhance consumer protections measures.”

Clean energy advocates saw this and had concerns that the commission was showing an openness to the arguments utilities have long been making, that rooftop solar depends on unfair subsidies.

“The entire premise of the process was backward,” said John Farrell, co-director of the Institute for Local Self-Reliance, a Minnesota-based nonprofit that supports a decentralized energy system.

He said the commission seems to have bought into views that would boost utility profits, as opposed to trying to craft a policy that would help to expand rooftop solar, while also being attentive to concerns about the balance between costs and benefits.

3. Personnel changes on the commission are leading to uncertainty about the upcoming vote.

Ordinarily, it would be reasonable to think there was a good chance that the commission would adopt the plan with few changes.

But this is not an ordinary case. One of the unusual elements is that two commissioners who were heavily involved in the case won’t be there for the vote.

Commission President Marybel Batjer said last month that she will be retiring at the end of the year. Gov. Gavin Newsom appointed Alice Reynolds, who has been Newsom’s senior advisor on energy issues, to serve as the new president.

And one commissioner, Martha Guzman Aceves, was named last week by the Biden Administration as the appointee to serve as regional head of the Environmental Protection Agency for California, Arizona and Nevada. Newsom has not yet said who he is picking to replace her.

Guzman Aceves has been one of the commission’s leaders on rooftop solar policy, and she played a key role in the proposed decision.

In the absence of these two members, there is a big question mark about whether the other members—including the incoming president and whoever Newsom appoints to replace Guzman Aceves—support the policies in the proposal.

One thing to watch is whether any commissioner files an alternate proposal for the panel to consider.

The next step is some intense lobbying by all sides, in the form of public pressure campaigns on Newsom and the commission, and through filings in the case.

California Utility Commissioner Defends Her Proposal: Commissioner Martha Guzman Aceves is emphasizing the provisions of the rooftop solar plan that would encourage consumers to add battery storage and take other steps that would help to reduce emissions. Soon after the proposal was released, she spoke with Sammy Roth of the Los Angeles Times. “I think the proposal is strong,” said. “It’s focused on what we collectively need, to get off of fossil fuels.”

Nebraska Utility Adopts Net-Zero Emissions Goal: Leaders of Nebraska Public Power District voted last week to set a goal of getting to net-zero emissions by 2050. With this vote, Nebraska’s three largest utilities, serving most of the state’s consumers, all have net-zero goals. While this isn’t the same as the state government setting goals or requirements, it is significant. Adam Aton of E&E News reports on how this rural utility has changed to embrace renewable energy.

White House Releases EV Action Plan: The Biden Administration has issued an “EV Charging Action Plan” that spells out how federal agencies will work together to help deploy about 500,000 electric vehicle charging stations across the country. Vice President Kamala Harris announced the plan, noting that the Biden Administration is investing heavily in EV charging through the recently passed infrastructure law, as Robert Walton reports for Utility Dive.

Swapping an Electric Motor for Your Combustion Engine Is Getting Easier: At a trade show last month, Ford showed off a classic pickup that had a new electric motor under the hood. The $3,900 motor, called the Eluminator e-crate, is part of a growing array of systems that can be used to convert old gasoline vehicles to run on electricity, as Christine Negroni writes for The New York Times. 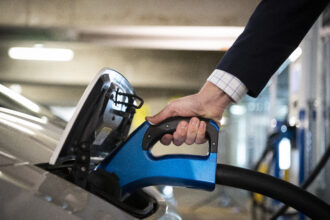 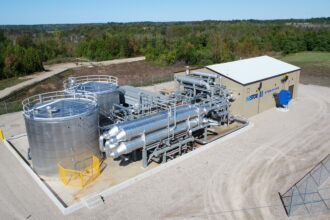