The accelerated melting of one of Canada’s largest glaciers from climate change reached a tipping point last May, scientists reported Monday. That event triggered a rare phenomenon known as “river piracy,” when one river captures the flow of another.

The Kaskawulsh Glacier in the remote Yukon has had its two watersheds altered, likely permanently. It affects ecosystems and communities downstream and it highlights the surprising and swift changes already underway because of climate change, according to researchers.

The Kaskawulsh Glacier’s meltwater has steadily drained into two rivers that fed two watersheds for decades. One headed north toward the Bering Sea, the other headed south to the Pacific Ocean. That changed in May, when one river suddenly captured the other at the front of the glacier, causing most of the meltwater to drain southward. Although the effects on people are minimal, the event choked off the flow of water and nutrients into at least one lake north of the glacier that some First Nation communities use for fishing.

This river piracy was likely only possible due to structural changes in the glacier, such as the thinning of ice at its front, brought on by man-made climate change, the research published Monday in the journal Nature Geoscience found.

“We documented a case of what we call river piracy, or the beginnings of river piracy, up in northern Canada that was a direct consequence of climate change,” said lead-author Daniel Shugar, an assistant professor of geoscience at the University of Washington Tacoma. “Even though the shut off of one river occurred over the period of a few months or less than a year, it was set up by a century or more of climate warming.”

Although Shugar said this event is not likely to become common because few glaciers today have dual drainage systems, it does set off alarm bells over global warming’s rapid effects.

“When we typically think of climate change impacts, we think of issues that are fairly slow to occur,” such as sea level rise and the tree line marching further north, Shugar said.

“But what our study demonstrated is that sometimes perhaps underappreciated consequences of climate change can and will occur on timescales that are very rapid…things that occur over the course of a single year.”

The reorganization of the glacier’s drainage system was so sudden it caught even the researchers off guard.

When Shugar and his colleagues traveled to the Yukon last August, they had planned to study parts of the glacier’s northern watershed, including Slims River and Kluane Lake. Some of the researchers had visited the area in 2013, when the lake levels were high and the waters reflected the serene surrounding mountainscape and blue skies. But they returned last summer to an altered landscape.

“We found that the Slims River had been dried up to really nothing more than a trickle…and the lake level [had] actually gone down several meters,” said James Best, a geology professor at the University of Illinois and one of the study authors. The lake’s levels were so low that sediment and mud were exposed and being swept into the air by strong winds, triggering massive summer dust storms. “It was sort of the first sign when we got there the first day that something dramatic had happened,” Best said.

The researchers abandoned their original plan and instead sought to find out why the Slims River and Kluane Lake had dried up. They combed through months of satellite images and data from water gauges across the glacier’s northern and southern drainage systems and analyzed high-resolution photos taken from Shugar’s drone. They traced the changes to May 2016.

For months leading up to that point, meltwater under the glacier was likely carving a new channel in the thinning ice, the researchers concluded. The water finally broke through the front of the glacier in May, causing most of the meltwater to flow south.

Besides documenting what happened to the Kaskawulsh Glacier’s drainage system, the researchers also conducted a statistical analysis to determine the likely cause of the glacier’s retreat over the past century or so. They found there was only a 0.5 percent chance that such melting could be caused by natural variability, making man-made climate change the all-but-certain culprit.

The Kaskawulsh Glacier hit its maximum extent around 1750, along with many glaciers in northern and western Canada. These glaciers started retreating near the start of the 20th century, a trend that has become more dramatic in the last 20-30 years.

“There’s been a number of studies that have now shown that the amount of retreat is very difficult to explain from natural variability—and, in fact, the only way you really can explain the magnitude of the recent retreat is by greenhouse gas emissions,” said Brian Menounos, a professor and glacier researcher at University of Northern British Columbia not involved in the study. This new paper is the latest example of that, he added. 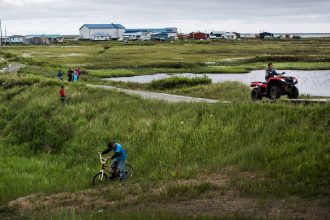 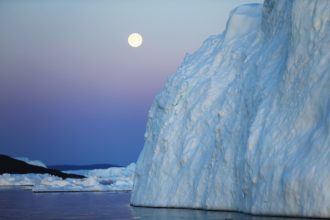