As BP’s deepwater well continues to discharge oil into the Gulf, the economic and public health effects are already being felt across coastal communities. But it’s likely this is only the beginning. From the bayous of southern Louisiana to the city of New Orleans, many fear this disaster represents not only environmental devastation, but also cultural extinction for peoples who have made their lives here for generations.

This is not the first time that Louisianans have lost their communities or their lives from the actions of corporations. The land loss caused by oil companies has already displaced many who lived by the coast, and the pollution from treatment plants has poisoned communities across the state — especially in "cancer alley," the corridor of industrial facilities along the Mississippi River south of Baton Rouge.

"The cultural losses as a consequence of the BP disaster are going to be astronomical," says Advocates for Environmental Human Rights (AEHR) Co-Director Nathalie Walker. "There is no other culture like Louisiana’s coastal culture and we can only hope they won’t be entirely erased."

Walker and co-director Monique Harden have made it their mission to fight the environmental consequences of Louisiana’s corporate polluters. They say this disaster represents an unparalleled catastrophe for the lives of people across the region, but they also see in it a continuation of an old pattern of oil and chemical corporations displacing people of color from their homes.

Harden and Walker point out that at least five Louisiana towns — all majority African American — have been eradicated due to corporate pollution in recent decades. The most recent is the Southwest Louisiana town of Mossville, founded by African Americans in the 1790s. Located near Lake Charles, Mossville is only 5 square miles and holds 375 households.

Beginning in the 1930s, the state of Louisiana began authorizing industrial facilities to manufacture, process, store, and discharge toxic and hazardous substances within Mossville. Fourteen facilities are now located in the small town, and 91 percent of residents have reported at least one health problem related to exposure to chemicals produced by the local industry.

The southern Louisiana towns of Diamond, Morrisonville, Sunrise, and Revilletown — all founded by former slaves — met similar fates. After years of chemical-related poisoning, the remaining residents have been relocated, and the corporations that drove them out now own their land. In most cases, only a cemetery remains, and former residents must pass through plant security to visit their relatives’ graves.

The town of Diamond, founded by the descendents of the participants of the 1811 Rebellion to End Slavery, the largest slave uprising in U.S. history, was relocated by Shell in 2002, after residents had faced decades of toxic exposure. Morrisonville, established by free Africans in 1790, was bought out by Dow in 1989. Residents of Sunrise, inaugurated near Baton Rouge by former slaves in 1874, were paid to move as the result of a lawsuit against the Placid Refining Company. In the mid-1990s, chemical producer Georgia Gulf Corporation poisoned and then acquired Revilletown, a town free Africans had started in the years after the civil war.

"We make the mistake of thinking this is something new," says Harden. She adds that the historic treatment of these communities, as well as the lack of recovery that New Orleanians have seen since Katrina, makes her doubt the federal government will do what is necessary for Gulf recovery. "Since Obama got into office," she says, "I have yet to see any action that reverses what Bush did after Katrina."

Harden says Louisiana and the U.S. must fundamentally transform our government’s relationships with corporations. "We’ve got to change the way we allow businesses to be in charge of our health and safety in this country," she adds. As an example, Harden points to more stringent regulations in other countries such as Norway, which requires companies to drill relief wells at the same time as any deepwater well.

Pointe-au-Chien Indian Tribe is a small band of French-speaking Native Americans along Bayou Pointe-au-Chien, south of Houma, on Louisiana’s Gulf Coast. Their ancestors settled here 300 years ago, and for them, the ongoing oil geyser is just the latest step in a long history of displacement and disenfranchisement. "The oil companies never respected our elders," explains community leader Theresa Dardar. "And they never did respect our land."

In the early part of the 20th century, the oil companies took advantage of the fact that people living on the coast were isolated by language and distance, and laid claim to their land. Over the past several decades, these companies have devastated these idyllic communities, creating about 10,000 miles of canals through forests, marshes, and homes. "They come in, they cut a little, and it keeps getting wider and wider," says Donald Dardar, Theresa’s husband and part of the tribe’s leadership. "They didn’t care where they cut."

The canals have brought salt water, killing trees and plants and speeding erosion. According to Gulf Restoration Network, Louisiana loses about a football field of land every 45 minutes, and almost half of that land loss is as a result of these canals. Meanwhile, Pointe-au-Chien and other tribes have found they have little legal recourse. At least partly as a result of lobbying by oil companies, the state and federal government have refused to officially recognize them as a tribe, which would offer some protection of their land rights.

So late last month, when oil started washing up on the shores of nearby Lake Chien and fishing season was cancelled before it had even begun, members of Pointe-au-Chien took the news as another nail in the coffin of the lifestyle they had been living for generations. On a recent Sunday, a few residents gathered at the Live Oak Baptist Church, on the main road that runs through their community. They described feeling abandoned and abused by the government and corporations. They spoke of losing their language and traditions in addition to their homes.

Sitting on a church pew, Theresa said they had met with indigenous natives from Alaska who discussed their experience in the aftermath of the 1989 Exxon Valdez spill. "We don’t know how long we’ll be without fishing," said Theresa. "It was 17 years before they could get shrimp." And, she noted bitterly, this disaster is already much larger than the Valdez, with no end in sight.

BP has promised payouts to those who lose work from the oil, but few trust the company to make good on their promise, and even if they did, they doubt any settlement could make up for what will be lost. "It doesn’t matter how much money they give you," says Theresa, "if we don’t have our shrimp, fish, crabs and oysters."

"It’s not just a way of life, it’s our food," she added. "It’s the loss of our livelihood and culture."

The anxiety that Theresa expresses is also increasingly common in New Orleans, a city whose culture is inextricably linked to the Gulf. "How do you deal with this hemorrhaging in the bottom of the Gulf that seems endless?" asks Monique Harden of AEHR. "That is just scary as hell. I’ve been having nightmares about it."

As the oil continues to flow, people feel both helpless and apocalyptic, depressed and angered. Residents who have just rebuilt from the 2005 hurricanes watch the oil wash up on shore with a building dread. "I never thought I’d be in a situation where I wanted another Katrina," says Harden. "But I’d rather Katrina than this."

Across the street from the church in Pointe-au-Chien is a bayou, where frustrated fishers wait on their boats hoping against all odds that they will be able to use them this season. Behind the church is more water, and a couple miles further down the road ends in swamp. Dead oak trees, rotted by salt water, rise out of the canals. Telephone poles stick out of the water, along a path where once the road continued but now the encroaching waters have taken over.

The miles of swamp and barrier islands that stood between these homes and the Gulf used to slow hurricanes, and now the entire region has become much more vulnerable. Brenda Billiot, another local resident, gestured at her backyard, about a few dozen yards of grass that fades into marshes and water. "This used to be land," she says, "as far as you could see." Billiot is still repairing her home from the 2005 flooding, including raising it up a full 19 feet above the ground. She wonders if that will be enough, if there is anything they can do to make themselves safe and hold onto their culture.

A brown rabbit hops across her backyard, and Billiot describes the dolphins and porpoises she has seen swimming nearby. Walking along the bayou here, where generations of people have lived off the land and fought to protect their territory from corporate theft, you begin to sense the gravity of what will be lost.

Theresa believes that the government and oil companies are looking for an excuse to permanently displace the tribe. She believes this latest disaster, and the upcoming hurricane season, may spell the end for their language and culture. "I tell people, If we get another hurricane, take everything you want, because I don’t think they’ll let you back in," says Dardar. "It’s scary because I don’t know where we’re going to go."

Jordan Flaherty is a journalist, an editor of Left Turn Magazine, and a staffer with the Louisiana Justice Institute. He can be reached at neworleans [at] leftturn [dot] org.

(Republished with permission of Facing South) 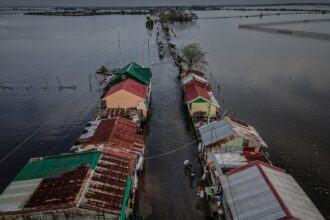