The melting of polar ice sheets and mountain glaciers will likely continue for thousands of years, causing irreversible sea level rise, even if global warming is limited to 2 degrees Celsius, according to a new report published last week during the climate negotiations in Paris.

Sea levels could rise 13 to 33 feet or more unless far more ambitious steps are quickly taken to reduce greenhouse gas emissions, according to the report issued by the International Cryosphere Climate Initiative, a nonprofit research and policy organization based in Burlington, Vermont.

“Even if we stopped all warming today and we stayed at this level, we are looking at about 1 meter [3.3 feet] of sea level rise by 2300,” said Pam Pearson, lead author of the report and director of the ICCI, who presented her findings on the sidelines of the Paris talks. “The temperatures that we are reaching even today, let alone in two or three or four decades, could lock in changes that aren’t going to be reversible on a human timescale.”

The findings show that achieving the ambitious goals set by the historic Paris Agreement won’t be enough to avert catastrophic sea level rise and severe water shortages in areas dependent on glaciers. The global climate accord set a goal of reducing greenhouse gas emissions enough to hold global warming “well below” 2 degrees Celsius since the preindustrial period, setting a preferred limit of 1.5 degrees. Earth has already warmed by more than 0.8 degrees Celsius (1.4 degrees Fahrenheit) since the 1850s.

“We are in a very high-risk zone at 2 degrees. We can constrain that risk to some extent if we keep it down to 1.5 degrees, but the lower the better,” Pearson said.

While success may head off the worst effects of climate change, it wouldn’t stop the melting, according to the ICCI.

“Once the ice starts moving and we start losing the mass, there is nothing really to stop it unless you are able to take temperatures down below preindustrial levels,” Pearson said. “The impacts will be way down the line, but they will be determined this century.”

The ICCI report is a summary of scientists’ most current understanding of the cryosphere, regions of the planet that are covered in ice and snow, and was reviewed by more than two dozen of the world’s leading cryosphere experts.

Part of the reason for the melting of polar ice sheets and glaciers is that climate change is happening in the cryosphere faster than anywhere else. Parts of the Arctic, Antarctica and many mountain regions have warmed two to three times faster than the rest of the planet, or 2 to 3.5 degrees Celsius (3.6 to 6.3 degrees Fahrenheit), according to the report.

Significantly greater sea level rise will occur with the melting of the West Antarctic and Greenland ice sheets, giant masses of ice that are vulnerable to even a slight increase in temperature, researchers said.

“If we have a prolonged period of time at 2 degrees, we are probably going to lose Greenland, and that is 7 meters [23 feet] of sea level rise,” Pearson said. “If we can stay at 1.5 degrees, the risk goes down a great deal.”

It may already be too late to stop the loss of the West Antarctic ice sheet. If this ice sheet melts entirely, sea levels will rise by 13 to 20 feet. With the loss of either ice sheet, sea level rise will be gradual, spread over hundreds or thousands of years, Pearson said.

As polar regions warm, permafrost, or ground that has remained frozen year-round for centuries, will thaw and release additional carbon dioxide. Even if the global average temperature increase is held to 1.5 degrees, 30 percent of permafrost will be lost by 2100, resulting in about 50 gigatons of additional carbon emissions, according to the report.

Such a massive release of carbon into the atmosphere would make it increasingly difficult to limit global warming to relatively safe levels. Only 275 additional gigatons of carbon can be emitted from all sources to keep global warming within the 2-degree limit.

Disappearing glaciers will also cause tremendous societal disruptions in regions that depend on them for water in the summertime, said Frank Paul, a glaciologist at the University of Zurich. Dry areas such as the Altiplano in the Andes and the Aksu-Tarim basin in Central Asia will be particularly hard hit, Paul said.

“In many regions, an important summer water resource will disappear, and that will increase the problem with migration even more than it is now,” he said. “Without the melt water from the glaciers, they would not be able to feed the population. We know the effects when people have no chance to grow their own crops.” 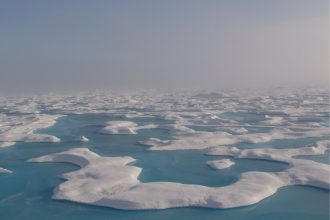