HOUSTON — A weeklong energy industry conference that came to a close on Friday revealed an oil and gas industry in the midst of a working contradiction.

In speeches that would have been unimaginable just a few years ago, executives from some of the world’s largest oil companies said the future is low-carbon and the industry needs to reinvent itself or risk becoming irrelevant as the world turns to cleaner energy.

Yet at the same time, their peers talked about a future where oil and gas demand would remain strong for decades. They spoke of natural gas not as a bridge to some fossil-fuel-free world but as a “forever fuel.”

The public debate highlighted the gap between a stated desire to become part of a climate solution and the reality of a booming oil and gas industry that remains the biggest part of the greenhouse gas problem.

The CERAWeek conference, hosted by the research and analysis firm IHS Markit, occupied the entire Hilton Americas hotel in downtown Houston, where $8,500 tickets bought thousands of executives, financiers and analysts access to the industry and an unending supply of food, drink and, in one tech-focused display, espresso served by a robotic arm.

Maarten Wetselaar, a Royal Dutch Shell executive, spoke on one of the first panels about “Fuels of the Future.” Shell has presented perhaps the most expansive vision of how the industry might change, and Wetselaar described a company that, a few decades from now, will service an electrified, hydrogen- and bio-fueled vehicle market and provide natural gas for heavy transportation. To meet the goals of the Paris climate agreement, he said, electricity may be the only energy consumers buy within 20 years, although he said natural gas will still fuel ships and heavy transportation.

Later in the conference, executives with BP and Equinor, the Norwegian energy company that last year changed its name from Statoil, stressed many of the same points as Wetselaar. BP’s chief executive, Bob Dudley, told the conference that his industry needs to engage in a discussion with supporters of the Green New Deal.

“We need to demonstrate that we share the common goal of a low-carbon future and that we are in action toward it,” he said in a keynote address in the hotel’s packed ballroom.

Their argument: who better to solve the climate crisis than the oil and gas industry?

A Celebration of Growth: The Only Limit Is Cash?

But these statements came in the shadow of a conference that remained largely a celebration of the remarkable growth that has catapulted the U.S. to become the world’s top producer of oil and gas, and soon, the International Energy Agency projects, one of the top exporters too.

The U.S. Energy Information Administration projects oil production to continue growing through much of the next decade before leveling off and eventually declining, while gas output is expected to grow through 2040, though its forecasts have drawn criticism for underplaying the rise of clean energy. This same scenario has carbon dioxide emissions remaining steady to 2050.

The “Fuels of the Future” panel featured three oil and gas executives who, despite Wetselaar’s talk of change, spoke mostly about a fuel already used widely today: natural gas.

The next day, billed as “oil day,” IHS Markit’s Darryl Rogers opened a panel called “Wellhead to Water” by saying he and his colleagues have continually revised upward their projections for growth in Texas’s booming oil and gas fields. The week before the conference, ExxonMobil and Chevron had announced that they plan to expand production from one Texas field to reach 1.9 million barrels per day by 2024—that’s about as much oil as the entire state was producing in 2012. The only limit, Rogers said, is cash.

“Is there some downside risk,” he asked. “Possibly, it’s just hard to see.”

The panel, which included executives from a leading pipeline company and the Port of Corpus Christi, covered the torrent of infrastructure development underway in Texas to bring surging oil production to the Gulf Coast for export.

Another panel, on the fracking revolution, featured executives from some of the smaller, independent oil companies that pioneered the technique, including Encana, Marathon Oil and Hunt Oil. They said the growth was just beginning and espoused the benefits it had brought by providing cheap energy. Again, Doug Suttles, chief executive of Encana, said the only limit they face is cash to fund their expansion.

Mike Sommers, chief executive of the American Petroleum Institute, sat on a panel about sustainability in the oil industry and called the fracking revolution the most consequential environmental development of the century, because it allowed gas to displace coal. In 2017, his group supported the Trump administration’s rollback of methane regulations, and API supports legislation that would end tax credits for electric vehicles.

The industry’s message was buttressed by representatives of the Trump administration, including Secretary of State Mike Pompeo, who gave a speech telling executives that their growth was providing security around the world, helping promote American capitalism and lift people out of poverty.

What About Climate Change?

U.S. Sens. Lisa Murkowski (R-Alaska) and Joe Manchin (D-W.Va.), who are the chairwoman and ranking member of the Senate Energy and Natural Resources Committee, told an audience that climate change is real and needs to be addressed. But they stressed the continuing need for energy to supply a growing global population.

It was a common refrain. In nearly every panel that addressed climate change, industry executives pointed to projections from the International Energy Agency that imply that, even if the world does begin to dramatically reduce emissions enough to limit warming to less than 2 degrees Celsius, demand for natural gas may continue to grow modestly for a couple of decades, and while demand for oil would shrink, it would still make up a sizable chunk of the energy mix.

The world will need oil and gas, the CERAWeek speakers said. We are going to be the ones supplying it.

But that IEA scenario also relies on technologies to remove carbon dioxide from the atmosphere in the second half of the century. There’s a simpler, proven and likely cheaper way to cut emissions faster: use less oil and gas. If the industry were serious about cutting emissions as soon as possible, it would produce less oil, not more.

Doing so, of course, wouldn’t fit their current business plans. At least not until a transformation like Wetselaar’s vision is seriously underway. The sector as a whole invested just 1 percent of its spending last year in low-carbon energy, according to CDP, which tracks industry investment, though Shell and other European companies spent more than the average.

A Change in Tone on Climate

Mark Brownstein, who runs the Environmental Defense Fund’s work on oil and gas, said the climate conversation has shifted dramatically at CERAWeek.

“When I started coming here, the only time climate change would come up was derisively and dismissively,” he said. Now, “there’s a real sense that the oil and gas industry is part of the conversation, but they don’t control the conversation.”

As he spoke at a table outside the hotel’s main entrance, a protester walked by dressed as Darth Vader, thanking attendees for their support of the Empire.

Brownstein noted the growing presence of technology companies at the conference—Google, Microsoft, Amazon and others, many of which have renewable energy goals.

“There are independent forces at work in the economy that are driving change to some extent whether the oil and gas industry likes it or not. You have a whole category of companies now that understand the issue of climate change and actually see it as economic opportunity,” he said. “And the only question is whether the oil and gas industry is able to transition itself to see the opportunities and take advantage of them,” or whether it’s left behind. 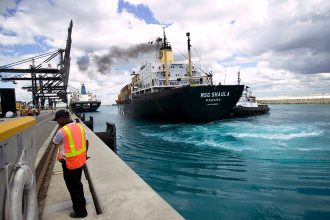