A plan to turn a played-out coal mine into the largest solar farm ever built in Kentucky stirred the imaginations of clean energy advocates with a vision of hundreds of thousands of panels glinting on a thousand-acre wasteland, delivering clean energy to the power grid.

But a year after it was proposed, the $150 million project on Bent Mountain in Pike County, the heart of the state’s eastern coalfield, is still just a vision. Thanks to foot-dragging by Kentucky Fuel, a coal company that is years behind in a nearby cleanup that must come first, time may be running out for the solar venture.

“There is an urgency all the way around,” said Adam Edelen, one of the solar farm’s developers. “We feel it. This project being shovel ready in 2019 or 2020 is really important.” After that, federal tax breaks for renewable energy start to dwindle, undermining the economics.

“If Kentucky Fuel would do what they said they would do there wouldn’t be a problem,” said Edelen’s Kentucky partner, Ryan Johns, vice president of RH Group.

Four years ago, settling one of the largest enforcement actions in Kentucky’s recent history, the coal company’s owners promised state officials that they would compete a tangle of reclamation work spread over several counties by September 2015. But the case has dragged on in court. It’s a fight that involves one of the most powerful families in the region, headed by Jim Justice, the billionaire coal baron who is now governor of West Virginia.

It turns out that the shift from one of the dirtiest fuels to one of the cleanest can be a trickier business in coal country than in, say, corn country.

And in an ironic twist, both sides say paying for this transformation probably depends on digging up more coal where most of a mountaintop was already scraped away.

The solar project is a joint venture between unlikely bedfellows—EDF Renewables, an international developer of solar and wind energy, and Berkeley Energy Group, a coal mining subsidiary of the RH Group that is interested in diversifying. Berkeley is getting the land ready and works with Edelen, who developed the original concept with Berkeley and is working on finance and marketing.

Electricity from the 100-megawatt array would flow into the regional grid, but who would buy it—they’re looking for a big corporation—isn’t yet known.

“Our ideal will be a company that understands renewable energy is the future and a company that has a social impact value system,” says Edelen, a former state auditor.

Part of Edelen’s sales pitch, delivered in his mild Southern accent, is the solar farm’s location on a former mountaintop-removal coal mine in a part of the country where people are less likely to accept mainstream climate science, and where thousands of jobs have been lost as the nation has turned away from coal.

“The country needs people who sound like me talking about sustainability and climate change, and we need the environmental community to feel the urgency to rebuild coal country,” Edelen said. That includes green-minded companies.

“So many corporations are claiming the mantle of environmental leadership. This is a concrete way to do it,” he said.

Despite the setbacks, the developers still hope to begin construction by early 2019.

“This can be a speed bump, but it’s not a challenge we cannot overcome,” said Johns.

But Johns said he’s frustrated that a Justice family mining company, Kentucky Fuel, is years behind state-imposed deadlines to complete required reclamation work, including at a location near the proposed solar farm.

He filed a lawsuit last year claiming that the regulators, who were seeking to collect millions in fines from the Justice companies, chased away a mining and reclamation contactor with unspecified “willful and malicious” comments. The suit went after the personal assets of two state mining officials. Their agency, the Kentucky Energy and Environment Cabinet, called the lawsuit meritless. It remains unresolved.

The sooner the better, in the view of both the solar developers and the state officials.

What It Means to ‘Reclaim’ Bent Mountain

In 2014, Jim Justice reached a settlement with the Kentucky Energy and Environment Cabinet involving hundreds of reclamation violations in several of the state’s eastern counties. He agreed that by September 2015 his companies would reclaim 10 miles of what are known as “high walls”—what’s left standing after mountains are blasted to expose coal seams. Three miles of these have yet to be finished—including 2,700 feet of Bent Mountain, at a spot near the proposed solar farm.

John Mura, a spokesman for the state environment cabinet, said that one way or another, the Bent Mountain high wall needs to be restored to its approximate original contour.

That means bringing down the exposed walls, eliminating waste rock piles and restoring a landscape similar to what was there before, according to Kentucky regulations.

“We have been pushing Kentucky Fuel to reclaim that, and they have not done so,” Mura said. “And that’s one of the reasons we will be back in court on June 11.”

According to Johns, most of the high wall’s 2,700-foot-long face is on land abutting the solar site, and their fates are closely linked.

For one thing, the solar farm is designed to use rubble from reclamation to flatten out its own contours. For another, repairing the high wall involves more blasting, too close to allow the fragile panels to be installed until after it’s over.

“Other people might be interested in coming in there and doing some additional mining and reclamation,” said Getty, the lawyer for Kentucky Fuel. That’s a standard practice when there’s still coal available for recovery and it can be sold to help pay for the reclamation, he said. And the new waste rock gets used to re-shape the land.

But it is not clear whether valid leases are in place for that approach. That, too, may have to be sorted out; if not, the state could issue a permit for reclamation only, but the work would be more expensive.

It’s unclear whether the costs of additional reclamation, and the possibility of paying for it with more mining, would materially affect the solar farm’s construction costs. Delay itself can be costly in this kind of project, as state and federal incentives change.

“We are doing everything we can to make it as competitive as possible,” said Doug Copeland, who works in Philadelphia as regional development manager for EDF Renewables. “We are still very excited about it. My hope is that sometime later this year, we’ll have some real news on the project.”

The proposal “sounds like it would be of interest to companies that want to procure renewable energy if the price is right and if they want to tell a story of helping communities transition away from coal,” said Dan Bakal, director of electric power at Ceres, a Boston coalition of businesses and environmental groups.

“But it comes down to getting the price right to where it competes well with other projects that are out there,” he said. 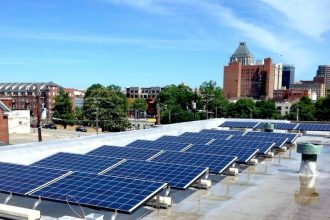