Story updated on Oct. 18 at 7 p.m. EDT to include comments from Enbridge.

Two aging oil and natural gas pipelines running under the sparkling waters of the Straits of Mackinac in northern Michigan are time bombs that could devastate the upper Great Lakes if they rupture, according to a report issued today by the National Wildlife Federation.

The pipelines are owned by Enbridge Inc. and carry an estimated 20 million gallons of oil and natural gas every day under the pristine water from Superior, Wisconsin to Sarnia, Ontario. The company announced in May that it plans to increase the volume of oil it pumps through the lines, a proposal the federation says could strain the 59-year-old pipes to the breaking point.

The federation worries that Enbridge, the company responsible for the largest inland oil spill in U.S. history that fouled the Kalamazoo River two years ago, has not properly maintained the pipelines and is not prepared to respond quickly in case of a leak.

“We should take whatever precautions necessary to protect the Great Lakes from an oil spill that would rival the BP spill,” Andy Buchsbaum, the federation’s Great Lakes Regional executive director said during a news conference Thursday to announce the release of the report.

The lakes provide drinking water for 30 million people in the U.S. and Canada, support a $7 billion fishery, a $16 billion recreational boating economy and are the backbone of one of the world’s largest regional economies, according to the report.

Enbridge spokesman spokesman Larry Springer said the report is rife with misconceptions about the company’s emergency response plans and safety measures. He said the pipelines, known as Line 5, meet all federal standards and are inspected every couple of years using internal sensors and remote controlled submersibles equipped with cameras. Both types of inspections have been performed this year, Springer said.

Springer also said the report incorrectly stated that the pipelines have carried dilbit, a particularly heavy form of Canadian crude oil that is diluted with liquid chemicals so it can flow through pipelines. He said much of the oil currently pumped through Line 5 is light crude oil from the Bakken fields in North Dakota.

“This line is not designed for or intended for nor has it been used for heavy crude oil,” Springer said.

Beth Wallace, the Wildlife Federation’s Great Lakes community outreach regional coordinator, defended the report. She said it is logical to conclude that Line 5 has carried dilbit, because most of the oil being produced in Western Canada is the heavy form of crude oil known as bitumen, and because more than two-thirds of it is being exported to refineries in the Midwest. Line 5 is part of Enbridge’s Lakehead system, which carries dilbit and other Canadian crude oils from Alberta to refineries near Sarnia, Ontario; Toledo, Ohio and Detroit, Mich.

Wallace said that because federal pipeline regulations don’t require operators to disclose the contents of their pipelines, there’s no way to prove what Line 5 has carried in the past or is carrying now.

“Even if they say they aren’t running it currently, they can change whenever they want and not have to tell anyone,” Wallace said.

The Wildlife Federation report acknowledges steps Enbridge has taken to safeguard against spills, including bracing the lines and installing emergency shutoff valves at the pumping stations at both ends of the water crossing.

Yet the federation remains concerned about the line’s safety, especially in light of the catastrophic rupture of Enbridge’s Line 6B near Marshall, Mich., which dumped more than a million gallons of tar sands oil into the Kalamazoo River in July 2010. That spill prompted federal investigators to blast the company for “complete breakdown of safety.”

A report by the National Transportation Safety Board determined Enbridge could have prevented the disaster, which so far has cost the company more than $800 million in cleanup costs, if the company had properly maintained the pipeline and fixed dozens of known defects. The U.S. Environmental Protection Agency recently notified Enbridge that oil continues to pool in the Kalamazoo River and more cleanup is needed.

Enbridge has announced plans to boost power to pumping stations along the Line 5 route so it can move an additional 50,000 barrels of oil per day, bringing the total moved through the pipeline to 540,000 barrels per day or 22.7 million gallons. Enbridge hopes Line 5 will be operating at its upgraded capacity by early 2013.

The expanded pumping capacity of Line 5 is part of a $2.2 billion plan by Enbridge to upgrade five of its Lakehead system pipelines by next year with a goal of expanding into new markets created by growing oil production from western Canada and the Bakken oil fields, according a statement from Mark Maki, president of Enbridge Partners, Inc., in a May 2012 news release announcing the work.

“Not only are these projects another positive step toward North American energy security, but they will also provide near-term economic benefits for communities, such as construction jobs and increased property tax revenues,” he said in the news release.

The Straits of Mackinac where Line 5 crosses is a four-mile-wide channel that funnels water between lakes Michigan and Huron in an area of the country remarkable for its pristine scenery. Because of the strong currents there, the federation says oil from a spill would be spread very quickly.

Although the pipelines have never spilled oil into the straits, the federation says evidence is mounting that there is reason to be concerned.

The report says the age of the pipes and the fact that they are subjected to severe underwater currents and extreme temperature are reasons for concern. It also cites a history of problems with Line 5, although it doesn’t offer specific examples.

A check of a database that InsideClimate obtained from federal records shows at least three spills on Line 5 in the past 10 years. They were relatively small – 420 gallons, 21,000 gallons and 4,200 gallons – but two of them fall into the category that PHMSA considers “significant.” The spills occurred on the part of the line that runs through Superior, Wisc. and Bay City, Mich.

The report theorizes what could happen if the pipes ruptured and pumped crude oil into the northernmost reaches of two Great lakes.

“If either of those pipelines leaked, the resulting oil slick would likely devastate some of the lakes’ most bountiful fisheries, wildlife refuges, municipal drinking water supplies and one of the region’s most popular tourist attractions: Mackinac Island,” according to the report.

The federation worries that federal regulatory agencies and pipeline operators favor a reactionary approach to pipeline oversight, meaning they react when something goes wrong instead of trying to prevent disaster.

The federation calls for safety improvements, including stationing an emergency response team near the straits. (Currently Enbridge has teams positioned three hours away, according to the report.) 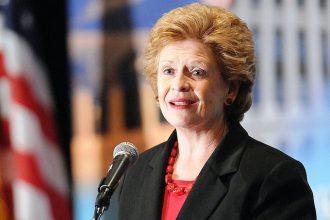 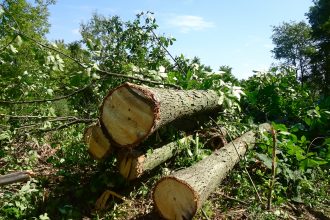